CHESTERFIELD, VA – More than two weeks after a Virginia woman was found brutally murdered in her home, police say a former Chowan University football player is now wanted in connection with a Chesterfield County homicide.

Tevin James McGougan, 23, of Cowardin Avenue in Richmond, VA was named as a suspect, according to Chesterfield Police. 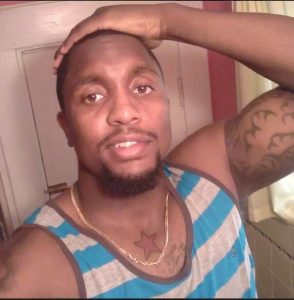 Police said on Nov. 11, just after 9 a.m., they responded to a call in the 6500 block of Statute Street after reports that a woman was found unresponsive.

When officers arrived they found 23-year-old Nishae Samms unconscious with a stab wound. Paramedics pronounced Samms dead at the scene.

WTVR-TV in Richmond reports that Samms’ mother arrived at her adopted daughter’s apartment earlier that morning where she found the front door was cracked.

Police sources told a WTVR reporter that Samms was later found by her mother in the apartment bedroom with her throat cut.

Officers and forensic units then converged on the Courthouse Green Apartment complex a short time later to begin an investigation.

According to another WTVR report, police believe Samms was the victim of domestic violence. Law enforcement sources said Samms’ four-year-old daughter was not in the home when her mother was killed, but was staying with grandparents.

Police say McGougan has not been seen of late. They say if anyone has knowledge of his whereabouts, they are encouraged to contact local law enforcement immediately.

AHOSKIE – It’s being called a “game-changer” for all of eastern North Carolina. In July, the state of North Carolina,... read more