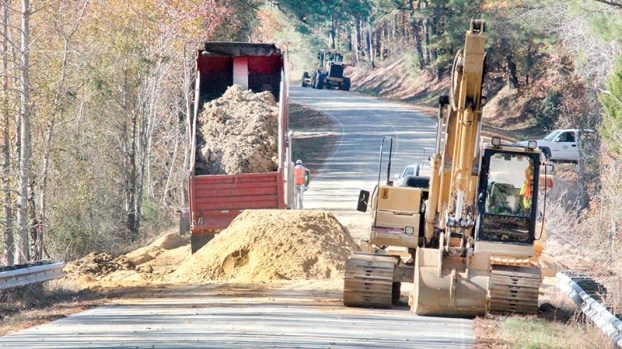 Rose Brothers Paving is working to make repairs to River Road, at Hare’s Millpond, that was completely washed away during Hurricane Matthew. That roadway, south of Winton, is expected to reopen on Dec. 21. | Staff Photo by Cal Bryant

It has been a slow and tedious effort, but roadways across the Roanoke-Chowan area damaged from a double dose of tropical systems are being pieced back together.

Some of those roads were ripped open by rushing floodwaters from Tropical Storm Julia that left upwards to 18 inches of rain in some portions of the local area back on Sept. 19-21. Repairs on a few of those highways were underway when Hurricane Matthew came calling on Oct. 8. Massive flooding that Matthew left in his wake also severely damaged some local roads unaffected by Tropical Storm Julia. 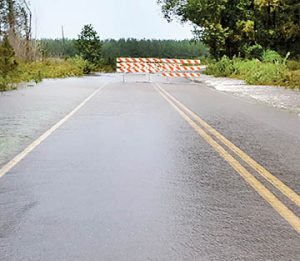 Water is shown rushing across Tyler Road near Rich Square in the aftermath of Tropical Storm Julia in late September. That road, impacted again by Hurricane Matthew in early October, remains closed and repairs are underway. | Photo by Angie Todd

“It was a double whammy for us,” said Scott Emory, District Engineer in the Ahoskie office of the North Carolina Department of Transportation. “We were just beginning to award contracts to make repairs from damage caused by the tropical storm and then Matthew came along.”

One major project in Hertford County is repairing River Road south of Winton. Hurricane Matthew caused a huge washout of that road at Hare’s Millpond.

“We have contracted with Rose Brothers Paving to make repairs to that section of River Road,” Emory said. “Work is progressing there on schedule and the plan is to have that road reopen by Dec. 21.”

Another major project in Hertford County is Horton’s Church Road west of Aulander. Emory said that road remains closed as a contract is being prepared to replace damaged pipelines that run underneath the pavement.

“Because that road has been problematic during other weather events over the years, a decision was made to install larger metal pipes/culverts under the road in an effort for it to handle a larger volume of water,” Emory stated.

He added that repair project is expected to take until after the start of the New Year to complete.

Meanwhile, a pipeline replacement project has begun on Beechwood Road, also in Hertford County. That work is expected for completion on Dec. 21.

Emory said two separate washout areas on Pritchard Farm Road – located off NC 45 between Cofield and Harrellsville – are in need of repair. He stated that the work there is expected to begin in approximately two weeks, with a tentative completion date of Jan. 21.

“We have a few other roads in Hertford County that need some finishing touches, but they’re all passable,” Emory said. “In those instances there were isolated areas where the road shoulders suffered some minor washouts. We (DOT) went in and placed some rock in those areas. Rose Brothers is under contract to pave those places.”

“The damage on Tyler Road initially occurred during Tropical Storm Julia and then suffered additional damage during Hurricane Matthew,” Emory noted. “Repair work there to replace a pipeline that washed out began Nov. 14 and we’re estimating the road will reopen in two weeks.”

Emory said repairs to Britton Road had yet to get underway.

“We have a contract with Barnhill Construction to make repairs on Dew Drop Road, Cremo Road and Brown School Road,” said Emory. “We’re hoping that the repairs to those three roads, to include fixing washouts and installing new pipelines, will begin next week.”

As far as Exter Road is concerned, repairs there are pending the approval of a contract.

“Exter Road needs to have larger metal box culverts installed,” Emory remarked. “It is one of two to three projects in our district that require larger drainage structures than what was there previously. It will take 60-to-90 days to complete those major repairs.”

Emory also addressed the length of time it has taken to this point to either begin repairs or to award contracts.

“You need to realize the magnitude of the damage caused throughout our three-county district,” he stressed. “Not only do we have to schedule the repair work and award contracts, we also must get the repair materials in place.

“There is a high demand from throughout the eastern part of the state for those materials since other DOT districts suffered the same type of road damages due to the storm,” he added.

To prove his point, Emory said there were approximately 40 roads in DOT Division One (14 counties in the northeastern part of the state – to include Bertie, Hertford and Northampton) that were impacted by the storm.

“However, down in Division Six (Bladen, Columbus, Cumberland, Harnett and Robeson), there were 400 roads impacted. They’re seeking the same repair materials that we are up here in Division One,” Emory concluded.

AHOSKIE – A local family is “thankful” to have their lives after watching their home go up in flames near... read more