WINDSOR – They say they’re managing their shortfall.  Now they’ve been told to do better: a lot better.

Earlier this summer, near the start of the 2016-17 school term, the Bertie County Board of Education learned depletions in the Bertie County Schools’ General Fund Balance has left the school system with an ‘estimated’ shortfall of at least $500,000 for the new fiscal year that began July 1. This insufficiency could produce a devastating effect on the BCS personnel – possibly affecting some 100 staffers. 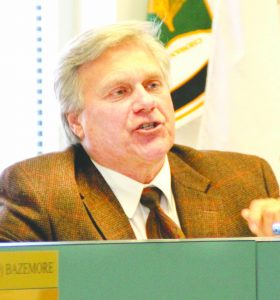 John Trent reads a timeline of events that allegedly has led the Bertie Public School system into what may prove as a seven-digit deficit. | Staff Photos by Gene Motley

At a joint meeting of the Bertie Commissioners and School Board held Monday in Windsor, Commission chair John Trent read a timeline of events that had brought the school system to its current financial situation:

On Aug. 24 Board of Education Chairman Tarsha Dudley and Vice-Chairman Bob Occena appeared before a group of Bertie County Commissioners and reported that the school system’s fund balance had dropped to a level of approximately $85,000.

Three weeks later (Sept. 14) the Commissioners took up the matter in a work session, discussing not only concerns about the current year’s audit of the school system’s finances, but also to canvass about cost-cutting ideas.  During that time, a motion was made for the County to provide – via a budget amendment from its contingency funds – the first of monthly payments of $42,000, with the stipulation of some contingencies, in order for the school system to receive subsequent payments (among them, the auditor’s report for the past fiscal year, campus consolidation of the Early College High School, and joint ownership with the county of the school bus garage and fuel station).

Twelve days later (Sept 26), in a joint meeting with the Commissioners, the school board presented its remedy plan, including providing the 2016 auditor’s report; but they also requested more time to work on their fix.

Then, at the regular Commissioner’s meeting on Oct. 6, County Manager Scott Sauer along with County Attorney William Smith updated their report regarding the severity of the school system’s financial situation. This update included a statement by Interim BCS Superintendent Julius Walker that he had been “misled ” by the previous BCS administration regarding the financial condition of the school system.

The new independent auditor met with Sauer and his staff last week (Nov. 17) and revealed the known discrepancies could be more dire than first believed; such as: the school system’s General Fund going from a balance of $643,139 as of June 30, 2015 to a deficit of $536,164 in one calendar year’s time. In other words, a loss experience of approximately $1,179,303 from the prior year. 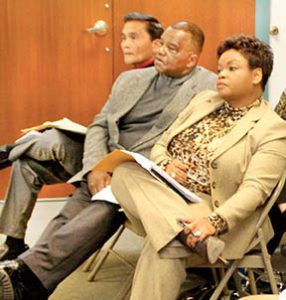 From left, Bertie Board of Education members Bob Occena, Barry McGlone and Tarsha Dudley listen while the county commissioners make their presentations at Monday’s joint meeting.

One proposed remedy was borrowing funds transferred from the “School Nutrition Fund”, to be later reimbursed.  But no one knew if the Board of Education has approved or had knowledge of this plan.

Finally, Trent said there is concern that unless significant budget reductions occur, the resulting school system budget deficit in the current year (2016-2017) will be a figure ranging from S$800,000 to $1,000,000.

At the conclusion of his statement, Trent offered some suggestions.

“First, transparency must exist for all discussions regarding these funds which are public tax dollars,” Trent began.

“Secondly, there are serious material weaknesses, findings and violations of the general statutes in the most recent audit (2015) completed for the Board of Education including: management not reconciling general ledger accounts; fund balances left materially incorrect at year end; school management misstated numerous prior year account balances; monies were spent that had not been appropriated and budget amendments not adopted,” he noted.

Trent went on to stress that 29 BCS employees did not have proper federal and state payroll withholdings.

“Examining audits from the most recent four years, indicates there is a pattern of significant deficiencies and violations of state law dating to the year 2011-2012 school audit report, which noted fifteen (15) violations of the NC School Budget and Fiscal Control Act,” Trent acknowledged. “Thirdly, the Commissioners must prepare a plan of action to report, correct, and prevent these violations from occurring in the future.

Sauer and assistant county attorney Jonathan Huddleston provided legal references regarding divesting the Board of Education of its financial powers by action at the State level, as has occurred in some other school systems around the state. Also, any liability for the school finance officer and the sureties on any official bond for sums illegally committed or disbursed in violation of the school budget act; and finally, discussions regarding seeking damages against the audit firm which prepared the financial statements for the fiscal year ended June 30, 2015.

“Through auditors on our behalf we have discovered there are a lot of issues that need to be discussed and brought out,” Trent said.

Sauer said a copy of the latest audit should have been sent to the office of the State Auditor in Raleigh.

“I think this goes further back,” Trent insisted. “This goes all the way back to 2011-12 with the whole attributes of not having the correct balances moving forward and starting the years off.  This should have been picked up.  We’re in a deeper hole that what we thought we were in.  It could be somewhere from $800,000 to a million dollars and that’s just on a conservative basis.  You see the same mistakes, the same violation of state statutes all the way through to today.”

Trent suggested a forensic audit, or a review of financial statements to determine if they are accurate and lawful. He further advanced the idea of the NC Department of Public Instruction and/or the Local Government Commission stepping in for assistance.

“We need the state to come in to audit the books to get them correct,” he maintained.

Dudley said the Board of Education had made changes ahead of those suggested that morning.  The school system financial officer has been replaced by Joe Holloway on an interim basis, and they desire a state audit.

“We need to see where we are,” Dudley said. “If not, it becomes a domino effect.”

Trent reminded the board they were bonded.

“You’re in a position of strength,” he stated. “You need to take a look at the auditors; and this board (Commissioners) will back you 100 percent. Our opinion is for you to file, because it’s going to be lengthy. You need to move forward to recoup your funds that are needed.”

Occena reminded the Commissioners that Bertie County Schools has had six superintendents since 2004.

“If this report is amended to the Local Government Commission,” Occena inquired, “how come they didn’t pick it up.”

“You need to get your finance officer to contact the LGC to answer that,” Trent replied.

Commissioner Ron Wesson said while the numbers appear to have not been accurately prepared, they seem to have been so over an extended period of time.

“We have a plan, we know that plan, and we will get that plan back to you,” Dudley assured the Commissioners. “We have a $500,000 deficit, and what we need to know is what all you can do to assist us.”

Sauer asked if the former BCS Finance Officer was still on the payroll, and why.

“She’s now in a testing position,” Dudley replied, but she would not elaborate any further on that issue.

Other Commissioners questioned the amount of the shortfall; offering aloud if it were not higher than $500,000.

“This is a rolling stone that’s rolling faster and faster,” noted Trent. “It could be $500,000, it could be $800,000. I don’t know if this board is in a position to make the statement to put money into something before the state gets involved in this to advise us where we’re at and where we’re going.”

Dudley said a shortfall figure of $1.3 million was exaggerated.

“If we had not made changes, then it might be at that amount at the end of the school year,” she replied.

“I understand you, but we don’t have your plan,” Trent fired back. “We don’t know where this is going to end up. Until the state comes in and does a full-blown audit of these books, I don’t think this board is in a position to commit to anything at this time.”

The chairman said to the best of his knowledge, nothing in the state statutes requires the Commissioners to fund a deficit by the school board for failure to comply with rules and regulations or misappropriations.

“If you choose not to help, that’s totally up to you,” Dudley said.

Holloway spoke up and said the average monthly spend rate was somewhere around $290,000, and the county’s appropriation was $250,000.

Trent said it was a difficult decision for the Commissioners whether to allocate money before the state gets involved.

“What if they come up with some other situations, then it might fall in our lap that we’ve violated state statutes,” Trent explained.

“We can take corrective action and make it correct,” Occena stated.

The discussion between the two chairs went back-and-forth on the solution.

“We need to get on track, and we need to have a plan before we can make any decision,” Trent insisted.

“This board of Commissioners does hold high the value of the students and the education system we have in this county,” said Commissioner Ernestine ‘Byrd’ Bazemore. “However, the Board of Education holds that responsibility year-to-year as well. We need to see what the state says in order to make sure the students are served here in Bertie County.”

“We all must be good stewards of taxpayer’s dollars here in Bertie County,” Dudley agreed. “When you give (the appropriation) to us, it’s up to us to insure we do what’s best for this school system with those dollars. We were clearly misled by our former administration and our former finance officer; but we have made those corrections, both those corrections, and we’re ready to move forward.”

The discussion continued for several more minutes and the joint meeting adjourned with no action taken on further appropriation by the county to the school system.

WINDSOR – They’re helping to keep the lights on, both indoors and out. On Tuesday Nov. 15, Dominion North Carolina... read more