AHOSKIE – At a time when almost all 58 community colleges in the North Carolina Community College System are experiencing flat, declining or minimal increase in enrollment, Roanoke-Chowan Community College (R-CCC) is beating the odds, increasing their enrollment numbers by more than 35 percent in under 10 weeks.

Over the past two years, R-CCC has seen a significant dip in enrollment. Full-time equivalent (FTE) numbers play a critical role in the funding of the college’s operational budget from the state, which means that if there is a decline in FTE then there will be a decline in budget funding. 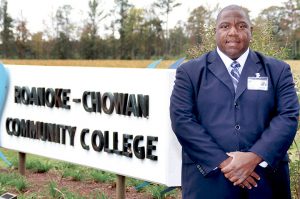 When asked about the basis of the enrollment decline, R-CCC Dean of Student Services Wendy Vann stated, “There are several factors noted for affecting the decline in community college enrollment, not only at Roanoke-Chowan Community College, but across the North Carolina Community College System and nationally. According to national reports such as Bloomberg’s View, some of the most prevalent reasons include a decline in the 18-year-old population, upturn in the economy and stricter federal financial aid regulations. From the College’s internal phone surveys conducted this summer with our non-returners, approximately 50 percent of those contacted indicated employment opportunities and/or returning to work.”

When the 2016-2017 academic year began, there was grave concern among the administration regarding the significant dip in enrollment numbers. On Aug. 8, there were 670 students enrolled at R-CCC for Fall 2016 classes. Today, there are 905 students enrolled. To see an enrollment increase such as this is somewhat unprecedented, especially at a small institution located in a rural area.

According to Vann, several strategies were employed to include increased marketing through social media and mass mailing, an increase in course offerings by the high school populations and additional courses offered during the second 8-week accelerated mini session. The anticipated increase from Fall 2015 to Fall 2016 is 0.22 percent for headcount and 1.58 percent for FTE. While to some the increase may seem insignificant, taking into consideration the declining enrollment trend throughout the North Carolina Community College System, the increase is definitely a positive success for R-CCC to share.

As enrollment continues to be a challenge across the state, R-CCC is actively reviewing and enhancing its marketing strategies.

“Currently, R-CCC marketing strategies are aimed at the non-traditional student population. We are extending our hours of operation to be accessible to the working student from 8 a.m. until 7 p.m. on Mondays –Thursdays to provide one stop assistance in admissions, financial aid, placement testing and registration. Although traditionally enrollment declines in the spring, our goal for spring semester 2017 is to enroll 1,000 students,” said Vann.

“I believe that the college has to increase enrollment by identifying areas that can reach new levels. We have reached out to public schools, private schools, and business and industry. We intend to lead an alumni program as well. Roanoke-Chowan Community College is also looking at data at a new level. We are analyzing data that comes from the System Office, which will allow us to identify where we need to increase our enrollment efforts and focus in regard to program development and offerings. We want to serve the whole community, and faculty and staff are now more than ever invested in these efforts,” stated President Jimmy Tate.

For more information about how to enroll at Roanoke-Chowan Community College, contact Registrar Amy Wiggins in the Admissions Office at (252) 862-1225 or visit the College’s website at www.roanokechowan.edu.

MURFREESBORO – The growth and expansion of Chowan University continues with the opening of the new Vincent Athletic Center. A... read more