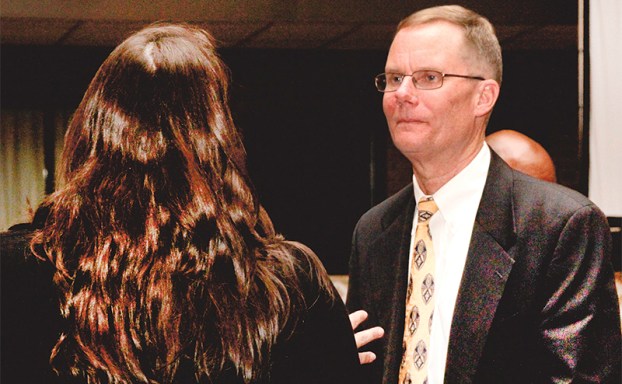 AHOSKIE – It’s being called a “game-changer” for all of eastern North Carolina.

In July, the state of North Carolina, the Carolinas Gateway Partnership and CSX proudly announced Rocky Mount as the home for a new intermodal rail terminal known as the Carolina Connector. This $270 million-plus critical infrastructure project will serve as a major transportation hub in the Southeast, and a catalyst for substantial economic growth throughout the state of North Carolina.

CSX already operates a major rail yard on the Edgecombe County side of Rocky Mount.

Last week, Jim Van Derzee, Industrial Developer for CSX, served as the keynote speaker at the 73rd annual Ahoskie Chamber of Commerce banquet. He brought the audience up to date on the Carolina Connector project, saying that intermodal refers to the movement of freight in containers using multiple modes of transportation. At intermodal terminals like the Carolina Connector, containerized goods arrive on trains or trucks, are sorted and transferred by electric cranes to other trains or trucks and then shipped to their final destinations. Intermodal combines the best of both worlds – the fuel efficiency of trains with the door-to-door flexibility of trucks – to deliver products to consumers in an efficient, cost-effective and environmentally friendly manner. 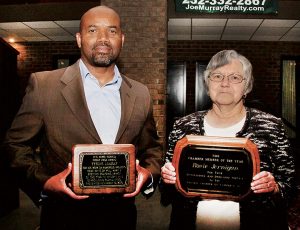 Rosie Jernigan and Tyrone Lindsey were the respective recipients of the Ahoskie Chamber Member of the Year Award and the Roanoke-Chowan News-Herald’s Front Page Award as presented at last week’s annual banquet. Staff Photo by Cal Bryant

“My job is a heck’va lot of fun. I get to build stuff in my mind and then let the engineers take over,” Van Derzee remarked.

He said CSX chose eastern North Carolina as the site of this project due to having easy accessibility to three major ports and a great system of highways.

Before sharing the details of how the project will work, Van Derzee promoted his company’s strengths as the major rail provider in the eastern United States.

“We interchange with other railroads to handle the freight shipments to and from other destinations, in North America,” he said.

In North Carolina, the town of Hamlet serves CSX as its largest “classification hub” where rail cars are sorted, processed and placed on outbound trains.

In North Carolina alone, CSX owns and operates 1,800 miles of track. In 2015, the company invested nearly $50 million in the state.

“We put a lot of our money back into our infrastructure, and we’re doing a lot of that here in North Carolina,” Van Derzee noted.

He stressed the importance of rail transportation throughout the nation.

“There is the load factor, the distance the goods/products will travel, and a volume component – the more freight we can put on a train, the lower the cost,” he said.

He said a typical 60-foot rail boxcar can handle the same load volume of two trucks.

“And then there’s the weight limitations on a truck,” he stated. “If it’s a heavy product being shipped, then the truck isn’t full because of the (weight) restrictions. In those cases, one boxcar is the same as four truckloads of freight.”

One intermodal train can carry a load of 280 trucks, which translates into reducing congestion on North Carolina highways and roads, saving the state $16 million in highway maintenance costs, CSX predicts.

“The intermodal terminal will change our rural network and change this region,” Van Derzee predicted. “While it’s going to be located in Edgecombe County, it’s going to have implications for businesses all over the region.”

The intermodal design actually uses trucks to pick-up freight containers from businesses wishing to ship. Those containers are transferred onto a rail car and shipped to the appropriate destinations.

“We still use the efficiency of trucks to initially collect that freight and then load it onto a train,” Van Derzee.

He said the site selection for this intermodal terminal was very important to the CSX network.

“We have such terminals in Charlotte, Portsmouth, VA and Charleston, SC, but there was a huge void in eastern North Carolina,” Van Derzee remarked. “The intermodal method fills a different niche, and it’s important to have that offering to a company who is considering locating to this region.

“The most attractive thing about intermodal is a company does not need a rail siding; all the customers, all the industry in this region will be able to capitalize on intermodal,” he added. “All you need is one truck shipment to take advantage of this design.”

Additionally, the intermodal terminal in Edgecombe County will also serve CSX as a hub, meaning more lanes of rail traffic.

“We’re not only going to be collecting and shipping containers from the local area, we’re also going to be processing containers at that rail yard which gives us the density to open a lane of travel,” Van Derzee. “This fills a rail void and also makes this area very attractive for industrial development.”

In closing, Van Derzee said construction on the project will hopefully be completed in 2019. Construction is expected to generate as many as 300 short-term jobs.

“But the real beauty is the long-term effect,” Van Derzee said. “We hoping for 1,500 jobs and I think that number is way too conservative, and these are high-paying jobs.”

As part of the annual banquet, Ahoskie Chamber officials presented the Chamber Member of the Year Award. That honor was bestowed upon Rosie Jernigan, a leader within the Chamber’s Women’s Division.

The Roanoke-Chowan News-Herald also presented its annual Front Page Award. That honoree for 2016 was Tyrone Lindsey.

JACKSON – When one door closes, another always seems to open. The town of Jackson may become the home of... read more