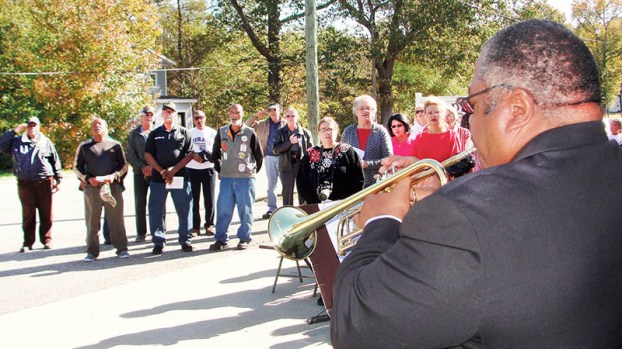 While a group of military veterans stand at left, Woodland Mayor Kenneth Manuel plays the Star Spangled Banner at the start of Friday’s Veterans Day ceremony in Woodland. | Photos by Danny Bowman Jr.

WOODLAND – Small towns are at the heart of America, but don’t let their tiny populations fool you as they are “big” on patriotism.

Veterans Day in the tiny Northampton County town of Woodland is a prime example of that fact. Here on a sunny, but brisk, Friday morning, locals gathered to pay tribute to members of our nation’s military branches….past and present.

U.S. Army Sgt. Major (retired) Michael Jerome Eason, a Woodland native, came home to serve as the guest speaker at the Nov. 11 event held at the Woodland Fire Department. Eason’s remarks centered on the Fallen’s Soldier’s Table, saying the absence of those who remain missing in action or prisoners of war is something worth noting. 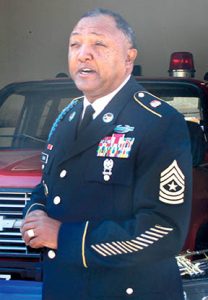 Eason spoke about the freedoms we enjoy today, a fact etched in stone thanks to those who have fought, and sometimes died, in battle.

The table, he said, is set for a single serving. The tablecloth is white, representing the purity of a soldier’s intentions to respond to their country’s call to arms. A single red rose in a vase on the table signifies the blood they shed to ensure America’s freedom.

On the plate is a small sprinkling of salt, serving as a reminder of the countless fallen tears of the families of the missing as they wait for a return. A glass on the table sits inverted, meaning no toast will be shared.

Meanwhile, a single candle is reminiscent of the light of hope, which lives in the hearts of those waiting, hopefully used to illuminate a path homeward for those lost loved ones.

Eason pulled out a photo of a blank check, saying it was made out to the United States of America for an amount up to, and including, the life of a member of the military.

He spoke of military honor, something earned by those wearing a uniform.

Woodland Mayor Kenneth Manuel spoke of the history of Veterans Day, which actually began as Armistice Day – the 11th month, the 11th day and the 11th hour in 1919 marking the end of World War I.

Donielle McDermott and Pattie Manuel read aloud a roll call of veterans, to include their branch and years of service.

Friday’s event was sponsored by Woodland Community Outreach, Inc. They provided light refreshments at the end of the ceremony.

Eason was born and raised in Woodland, beginning his career in 1974 as a member of the North Carolina National Guard. He spent 18 months overseas in support of Operation Iraqi Freedom. There he commanded 300 soldiers while conducting over 250 combat patrol missions.

He now lives in Clinton, Maryland with his wife, Phyllis.

WOODLAND –Chief of Police J. Ruppe said a 12-year-old girl reported missing Sunday has been found safe. “She is not... read more