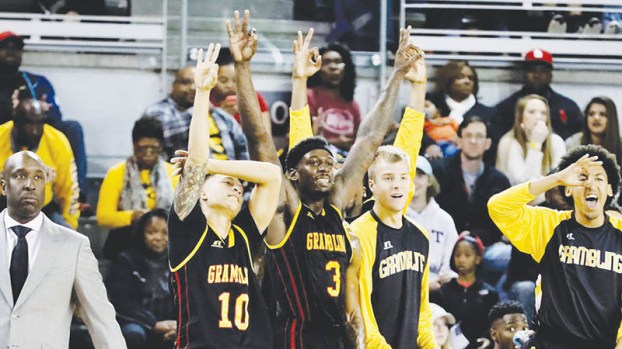 Tiger by the tail

GREEENVILLE – It’s over 1,000 miles from Ahoskie to Grambling, Louisiana, but for Evan Simmons it must have seemed a whole ‘nother world away.

Now, after an adjustment period, maybe it’s not so far after all.

Simmons returned back east – at least as close as ECU’s Minges Coliseum – this past weekend when the Grambling State University Tigers opened their 2016-17 college basketball season against the Pirates here on Friday night.  The former All-Northeastern Coastal Conference three-sport star is settling in as a first-year player with the Tigers.

“It was an adjustment at first, but I’m used to it now,” Simmons said with a shy smile as he congregated with friends and family outside the visitor’s locker-room after the game. “I still have basketball to get me up every day.” 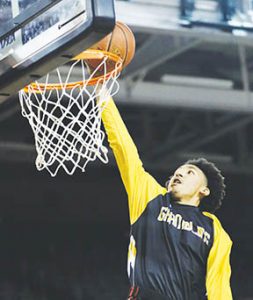 Evan Simmons drops a basket during warm-up drills Friday night before the Grambling State-East Carolina basketball game. Simmons, a former star at Hertford County High, is in his first season of college ball with the Tigers

A recruiting target of Davidson, North Carolina A&T, North Carolina Central and even NCAA Division-II Winston-Salem State, Simmons only declared for the Tigers late last summer – almost within only a few weeks of enrollment.

Still, Grambling is known in not just HBCU circles, but nationally as a college football power. But Simmons thinks with what the Tigers have in place, they can change that.  The Tigers were 4-14 in the Southwestern Athletic Conference (SWAC) last season and feel their future is bright.

One of the pieces to that expected rise in fortune as well as a factor that figuring in Simmons’ decision to sign with the Tigers was his association with third-year Grambling coach Shawn Walker.   Walker, who formerly played and coached at nearby Elizabeth City State University, made a late push to sign Simmons and get him down on the bayou. That golden opportunity would give the six-foot-five 175-pound wing guard a chance to play college basketball at the Division-I level.  Simmons also had played several years of AAU ball and attracted the attention of quite a few college scouts and recruiters.

“So far, he’s done well in practices,” said Walker. “He has to make the transition to the college game, but he’s adapted well.”

Simmons would like to follow in the steps of another East Coast product that migrated to the southwest.  Sophomore Nigel Ribero hails from Chesapeake, VA – a product of Oscar Smith High School.  Averaging 11 points and 2.1 assists per game, the 5-foor-10 sharpshooter was named as SWAC Freshman of the Year.  In addition to signing Simmons, Walker has stretched his recruiting tentacles back east to also pluck six-foot-nine pivot man Noah Cummings from Pembroke, NC and Anthony Gaston from Richmond, VA.

As one of seven first-year players Walker has brought in, Simmons is aware of the effort it will take for him to earn greater playing time.

In addition to the adjustment from high school to college, Simmons had to adjust to a practice routine that sometimes stretched as long as several hours.

“Four hour practices are no joke,” he admits. “The older guys really push us in practice, and that just makes us work harder.  For me to get more time on the court I know I have to score and play defense.  Coach is really big on defense.”

Simmons has filled out his wiry frame a bit more since he re-located.  He credits that to a not-so-secret Creole recipe.

“It’s that Louisiana cooking,” he notes with a smile and a wink. “It’s very spicy.”

MURFREESBORO – Over the past 30 years, outstanding players, coaches and athletic patrons have been honored for the blood, sweat... read more