INSTITUTE, WV – The Chowan University women’s basketball team opened the 2016-17 season with a pair of wins in the Conference Challenge held here last weekend. The Lady Hawks opened with a near-record performance in hitting the century mark against host West Virginia State University 103-75.  The team fell one point shy of the school’s single-game points record (104, vs. Mary Baldwin College, 2000).

They then held off a furious rally by the University of Charleston (WV) the next afternoon and claimed an 84-78 win.

Jordan Payne led all players in the WVSU contest with 25 points and 18 rebounds; and in her first collegiate game, Mariah Coker scored 15 points while Dhyamond Crenshaw added 13 points and 10 rebounds in the victory. Chantel Roberts scored 11 points for Chowan.

With the score tied 3-3 in the first quarter, Roberts drained a three-pointer to push Chowan ahead 6-3.  From there, the Hawks capitalized on a 13-3 run to take a commanding 19-6 lead and took a 23-15 lead into the second quarter. 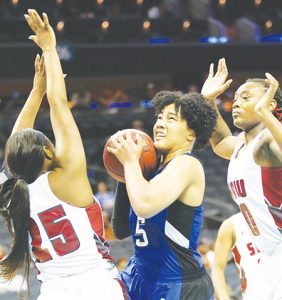 Chowan senior Jordan Payne (w/ball) opened the 2016-17 season with a double-double in the Hawks first two contests, both wins. Chowan won 103-75 over West Virginia State and 84-78 against the University of Charleston (WV) last weekend. | Next Level Photos / Charles Revelle

The Hawks led by as many as 14 points in the second quarter before heading into halftime with a 44-35 lead.

Chowan maintained that momentum at the start of the third quarter.  After Crenshaw hit a layup to give Chowan a 56-45 lead, the Yellow Jackets answered with a 7-0 run, leaving Chowan clinging to a 56-52 lead at the 3:42 mark.  Back-to-back buckets by Payne gave the Hawks some breathing room, and propelled the Hawks to a 73-57 advantage heading into the fourth quarter.

Chowan dominated the final frame, leading by 19 points or more in the final ten minutes of play before closing out the contest with a 28-point victory.

Sunday afternoon Chowan closed out the two-game set with an 84-78 win over the University of Charleston (WV).  That improved the Hawks to 2-0 with the win.

Four Hawks recorded double-digit points on Sunday   Roberts paced the Hawks with 16 points while Courtni Williams added 12 points in the win.  Shaikeyla Jordan chipped in 11 points for Chowan while Payne notched her second double-double of the season with 10 points and 13 rebounds, nine of those caroms off the defensive glass.

The Hawks and Golden Eagles exchanged baskets through the majority of the first quarter before a Charleston three-pointer left Chowan trailing 11-5 at the 2:24 mark. The Hawks fought back but with the Golden Eagles up 18-11 with four seconds left to play, Coker drained a three-pointer with one second left to pull the Hawks back within striking distance.

Two three-pointers by Roberts along with a layup by Jada Lee contributed to an 8-4 run for the Hawks at the start of the second quarter and tied the score 22-all.  Then a three-pointer by Jordan Pettaway and basket by Crenshaw gave Chowan a narrow 40-37 lead into the halftime break.

Both teams fought to take control of the momentum at the start of the third quarter.  Payne’s layup with under eight minutes on the clock gave the Hawks some breathing room and Chowan built their lead to as many as 11 points (59-48) after Coker’s three-pointer helped them close out the third quarter with a commanding 65-52 advantage.

Chowan dominated most of the fourth quarter until the last two minutes of play.  With under a minute-and-a-half to go a layup by Charleston left Chowan clinging to a 79-71 lead.  The Hawks pulled away 82-71 with just under one minute on the clock, but the Golden Eagles orchestrated a quick 7-0 run to make the score 82-78 with eight seconds left in the game.  Payne then sank two free throws after a Charleston foul to secure the six point win for the Blue and White.

The Hawks road games continue as they are playing their first eight contests away from the Helms Center.  Next up is a trip to Francis Marion University on Nov. 16.

Tiger by the tail

GREEENVILLE – It’s over 1,000 miles from Ahoskie to Grambling, Louisiana, but for Evan Simmons it must have seemed a... read more