WINDSOR – Bertie County Sheriff John Holley announced an arrest earlier this week in the case of a Windsor man found shot to death off Cedar Landing Road near here.

21-year-old Raqwan Freeman of 115AWest Robin Lane, Windsor, is being held in the Bertie/Martin Regional Jail on a charge of first degree murder in connection with the Oct. 4 death of Bryan Okeffee Harrell. 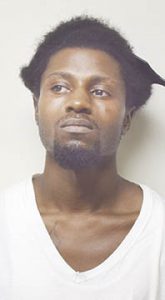 Harrell’s body was found inside of his minivan next to a basketball court at the Cedar Landing Missionary Baptist Church, about six miles south of Windsor.

Holley said an autopsy conducted by the Pitt County Medical Examiner’s Office in Greenville determined the 50-year-old Harrell, known as “Keith”, had been shot twice. The autopsy reveals he died from a gunshot wound to the neck, while he was also shot in the right side of his chest.

Holley said Bertie County deputies were called around 5:30 a.m. to the church on Oct. 4 for a call of shots fired. There they found Harrell dead inside the van on the church property.

Family members told authorities the 50-year-old Harrell sang in the church choir and lived about a quarter of a mile from the church.

“We put a lot of hours – tiresome hours – into solving this case, both the detectives in our office as well as the members of the SBI,” said Holley. “We feel very good about the progress we made.”

A $2,000 reward was offered for information leading to an arrest and conviction; with $1,000 coming from the sheriff’s office, while the other $1,000 was raised by Harrell’s community where he lived.

“The reward didn’t figure in our solving the case,” Holley said. “But we would like to thank the community for their calls which did assist us in helping bring this person to justice.”

Freeman, meanwhile, also faces additional charges of robbery with a dangerous weapon and financial card fraud in this case. He has prior arrests in Bertie County on a drug charge as well as another count of larceny.

Freeman is being held in the Bertie/Martin Regional Jail under no bond.