Courthouse security upgrade in the works

JACKSON – A security upgrade project is pending here at the Northampton County Courthouse, which has the unfortunate label by a top judicial official of being the most unsafe facility in the local area.

At their meeting here Monday, the Northampton County Board of Commissioners learned of an immediate concern raised by the Courthouse Safety Committee. That group has recommended the improvement of the security of the courthouse as well as the small courtroom, located in building adjacent to the courthouse. That smaller building, connected to the courthouse by a covered walkway, also houses the county’s finance department and one room serves as the official meeting place of the county commissioners. 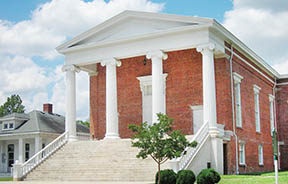 “Anyone coming off the street can access the small courtroom without having to pass through a metal detector,” said County Manager Kimberly Turner. “That is a serious breach of security.”

Through the use of a projector, Turner showed the commissioners an enlarged version of the architect’s drawing of the proposed project. She said those plans call for enclosing the breezeway, meaning access to the small courtroom will only be allowed from inside the main courthouse and through a metal detector.

The project also includes security upgrades to a side entrance to the courthouse (entry will only be allowed by scanning a card) and at the facility’s main entrance, which is at the rear of the building.

“However, we have made some modifications to that and have reduced the cost to $140,300,” Turner said. “I’m proposing we add this project to our already established renovation project at the old DSS building, where we will eventually move some of our county offices from the courthouse square to the old DSS building.”

The DSS renovation project, which will include the security features for the courthouse and small courtroom, is $2.65 million.

“How are we going to pay for it,” asked Commission Vice Chairman Joe Barrett.

Turner explained that the loan package for the total project is forthcoming for the commissioners to study.

“To pay it off, we will use some debt service that will come off the books in 2016, and 2018,” Turner stated. “We will take those funds and use towards making the annual payment costs for this project.”

Commissioner Virginia Spruill inquired of Turner of a retreat held last year by the board where several projects were discussed, including to the county’s public schools.

“Was this (security) project part of that (discussion),” Spruill asked.

“No,” answered the county manager. “The only part discussed (at that time) was the renovation to the old DSS building.”

“Do we consider this (security project) as an emergency need,” Spruill inquired. “We prioritized plans at that retreat and since this is not part that, what do we do with the plans we prioritized? Do we put them on the back burner?”

“That’s up to the board on how you prioritize,” Turner noted. “We (Courthouse Safety Committee) think this (security project) is a major need. This is a severe security issue.”

Commission Chairperson Fannie Greene wanted to know why $140,000 was needed just to enclose a breezeway.

Turner explained that according to the architect, $113,300 is needed to build the walls. The security access stations are $23,000 while another $4,000 was needed to repair the doors at the main entrance to the courthouse.

“But keep in mind that this architect always has cost estimates on the high side,” Turner remarked.

Barrett stressed a need to look at the “big picture.”

“We have needs within our school system,” he pointed out. “One of the hopes was that after we retired some debt that we could address some of the needs of the school system.”

Turner said the debt service Barrett was referencing was what is now on the books as for past projects related to school improvements.

“But the county still has to come up with it one way or the other, no matter which department is utilizing those funds,” Barrett stated. “What I want us to do is look at the whole needs process and evaluate that. I’m not trying to downplay the security issue at the small courtroom, but we may not be able to do all three of these things. We need to realistically look at what we can do. We need to realize, and I’ve said this before, that we’re facing a tight budget year (in 2017-18) and we’re not going to be able to dip into our fund balance as we’ve before.”

“I do see the need for the security for the courthouse personnel,” said Commissioner Robert Carter. “We’re always going to have debt to cover needs for our county. That’s never going to stop. I’m thinking that the debt we’re paying off in 2016 and 18 will roll over (into another project) like we never paid it off. I think that debt will cover the cost for this security renovation.”

Turner said it was her intention to have the debt financing information for this project ready to present to the commissioners by their next meeting on Nov. 21.

“The finance officer and I have both looked at this and we’re very much aware of what our financial situation may be next year,” Turner remarked. “We’re cognizant of the fact that we need to make sure that whatever funding we have for this project is in line with what we can afford.”

Turner stressed to the commissioners of what she termed as an “extreme need” to upgrade security at the courthouse as well as the small courtroom.

“We have liability not only to our employees, but to our citizens when they are here on county property,” she said.

She referenced today’s society where there is a noted lack of respect for law enforcement.

“Someone could easily enter that small courtroom with a gun, and they might not stop there; they could come through a door and enter this meeting room,” Turner noted. “This project is the most practical, least costly plan that we have. You can make a decision when you see the financing information, all I need from you today is letting me know whether or not to move forward on this project.”

“I’m onboard on seeing this move forward, but I would like to talk with our architect about getting this cost down,” said Greene.

Chief District Court Judge Brenda Branch called the Northampton Courthouse the “most unsafe” one in District 6, which includes Bertie, Halifax and Hertford counties.

“Hertford County just built a new courthouse with state of the art security,” Judge Branch noted. “Bertie is now in the process of upgrading the security at their courthouse. Halifax is the same way.”

She said it was totally unsafe to enter a courtroom without first passing through a metal detector.

“Part of our job is to look to see where we have security gaps and see what we can fix, how we can fix it and how easy it is to fix,” Branch stated. “We understand your budget concerns, but we also understand the importance of safety.”

After Judge Branch’s comments, the board told Turner to move forward with putting together a financial debt service package for the project that they can study at their Nov. 21 meeting.

LEWISTON-WOODVILLE – Four billion chickens: that’s how many birds have been harvested by the Perdue plant here since 1976, according... read more