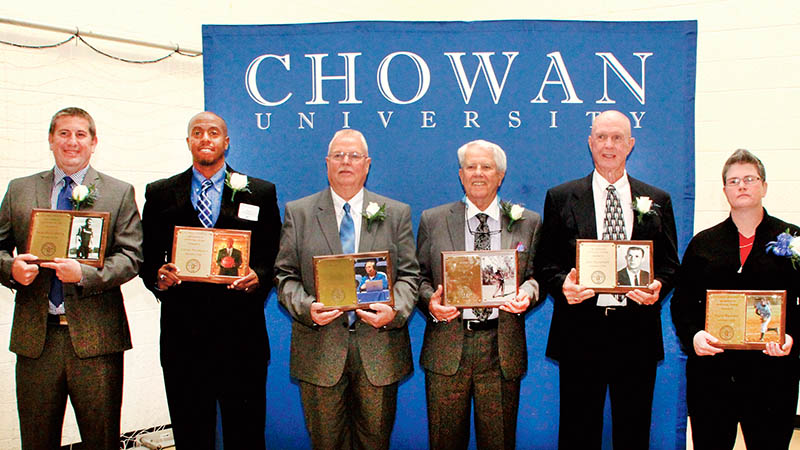 MURFREESBORO – Over the past 30 years, outstanding players, coaches and athletic patrons have been honored for the blood, sweat and tears they have individually poured into Chowan University athletics and accepted their rightful place in the school’s Hall of Fame.

For Hodges, a special night was even more rewarding as he was inducted by a man he holds in high regard – Jack Goldberg, who gave him a start in sports broadcasting.

“I came to love his professionalism and his devotion to sports, especially his promotion of the local student-athletes here in our area,” Goldberg recalled.

Later, the two became the “voice” of local athletics, broadcasting a wide array of high school sports contests as well as Chowan games.

“Gattis brought a true knowledge of the games and his valued opinions to the broadcast booth,” Goldberg said. “He was a natural behind the mike. He could paint a picture of what was occurring on the field or on the court. He is one of the most accomplished announcers in all of eastern North Carolina.

“Chowan University is very fortunate to have Gattis Hodges on their sidelines and in their press box. His love and devotion to Chowan athletics over the years has certainly earned him the honor of being inducted into the Jim Garrison Sports Hall of Fame.”

Hodges’ roots in Chowan athletics pre-dates the radio booth. In 1982 he served as the statistician for the Chowan football program and later (83-85) as the PA announcer for the men’s basketball program.

Over the years, Hodges has served as the voice for several high school football, basketball and baseball programs, to include Hertford County High School. He also hosts a popular weekly radio show – “Talking Sports.”

“If it had not have been for Jack Goldberg, I wouldn’t be standing here tonight,” said Hodges, a Northampton County native. “He gave me my first opportunity in radio and he taught me a lot about the business.”

Hodges said in the week prior to the banquet, he was going over the list of inductees since the Chowan Sports Hall of Fame was founded in 1985.

“I counted 39 players or coaches in this Hall of Fame that I’ve covered while broadcasting Chowan games,” Hodges noted. “I had to pinch myself in looking at that list, knowing I would be in the same fraternity with people like Jim Garrison, Bob Burke, Nate McMillian, Meredith Long, Fred Vinson, Jerry Hawkins, George Koonce….the list just goes on and on. I am truly honored to stand here before you tonight.”

“But I feel like I have a Master’s Degree from this university because of the people I worked with and the things I learned here,” he stated. “I was touched by the passion of Jim Garrison. I look at (Deputy Athletics Director/Senior Woman Administrator) Meredith Long and admire her work ethic. I look at (current head football coach) Tim Place and I immediately think of respect.”

Hodges said one of his first jobs at Chowan was serving as the public address announcer for men’s basketball games. That meant his seat on press row was mere inches from legendary Chowan coach Bob Burke.

“I watched how he strategized games; how he dealt with players; how he tried to handle officials; and how he promoted the game of basketball,” Hodges recalled.

Even though Hodges said it was a thrill to have the opportunity to broadcast athletic events for decades at the high school and collegiate levels, that job comes with a major drawback.

“There are a lot of times that this job takes me away from my family,” he said. “I missed proms, special events at church, and other events, but I thank them for understanding my obligations to cover my Chowan kids while I was away from you.”

He had special words for his wife of 41 years, Pat.

“You don’t go to ballgames anywhere east of I-95 from August through June, broadcasting as many as 80 games a year, without a lot of love, understanding, sacrifice and support at home,” Hodges stressed. “If there’s a woman on this earth better than my wife, I haven’t met her.”

In closing, Hodges thanked Chowan’s athletic department and university president Dr. Chris White for allowing him to be the voice of the Hawks.

“I hope it never ends,” he concluded.

Blanchard was inducted by a childhood friend and later teammate at Chowan, Lawrence Smith.

“I was always amazed by his talent, his energy level, his enthusiasm and desire to be the best at whatever he did,” said Smith. “He was highly recruited out of high school and came to Chowan who had a national powerhouse in football at that time.”

Blanchard, a native of Highland Springs, VA, said he arrived at Chowan in August of 1960 as a tall, skinny and immature 18-year-old.

“Chowan gave me an opportunity to grow and learn and I’m appreciative of that,” Blanchard stressed. “My time here was way too short, but I enjoyed it. I made a lot of great friends and the professors helped me immensely. This place will forever hold a special place in my heart and I am honored to be a part of the Hall of Fame.”

In his two seasons at Chowan, Blanchard rushed 1,645 yards and 19 touchdowns. In his sophomore season he helped to propel the football team to an 8-1 overall record and a NJCAA Rose Bowl appearance in Pasadena, California.

“In high school, Mike played all different sports,” said Reinhardt. “He was good at all of them, but golf was his calling. He was part of a state championship team and he brought that high level of talent here to Chowan.”

“Chowan has had a profound effect on me,” said Hendley. “I had a chance to grow here. I studied more here in two years than the whole four years I was in high school. I will forever have great memories here at Chowan.”

At the close of his acceptance speech, Hendley announced that he and two partners have purchased Quail Ridge Golf Course in Pinehurst and that he was going to help and support the current golf program at Chowan.

Eric Terrill, who started Chowan’s men’s and women’s soccer program in 1993, inducted McClafferty, one of his very first recruits.

“When I first met Sean I immediately realized he had a special gift, that of leadership,” Terrill said. “God made him a leader of men.

“Every player who has played for me knows the story I always share of Sean McClafferty and that ’93 team,” Terrill continued. “It was one of the best coaching experiences I’ve ever had. We started with nothing; I went out and looked for kids to play. When I saw him play at a tournament in Florida, I knew he could make a big impact for us.”

McClafferty, a Florida native now living in Roanoke Rapids, credited his parents for instilling in him the values of being a leader.

“They taught me early in life that there’s no i in team,” he said. “If you play for love for the school’s name on the front of the jersey, people will remember the name on the back.

“Being up here accepting this accolade isn’t about me, it’s about we,” McClafferty continued. “For all my coaches from since I was young, to include my father, I would not be standing here tonight without them. To my teammates, I wouldn’t be here without you. And to my parents, I’m so grateful for the sacrifices you made for me.

“It amazes me to think that my plaque will now be displayed on the Hall of Fame wall here at Chowan, surrounded by some of the great names who have earned that respect,” McClafferty closed.

After graduating from Chowan, McClafferty launched a high school coaching career. During his 17 years of coaching, he has won a total of 14 middle school conference titles, five basketball conference championships, and eight track and field conference championships. He has been voted Teacher of the Year for Northampton County Schools and Top AIG Teacher of the Year for Roanoke Rapids City Schools.

“Grit, determined, stubborn, commanding and savvy – these adjectives apply to Kayla Meacom, the second winningest pitcher in our softball program’s history,” said Long. “Her actions were not in words, but on and off the mound. I coached her for four years and whenever I needed her I just handed her the ball and she would do the real work.”

“I’d like to thank those for selecting me for such a great honor,” said Meacom. “All the honors and awards I’ve been a part of are made possible by special people who are with me here tonight. I’m here to accept this honor in tribute to you; thank you for your insight, your encouragement, your continued support and most importantly your friendship.”

During her four-year tenure at Chowan, Meacom helped the softball program to four winning seasons, a USA South Conference title, a NCCAA South Region Championship, and a NCCAA National Tournament appearance. She won 51 collegiate games as a pitcher.

Coach Burke inducted Thompson, saying he had a great work ethic on the court and was the purist shooter he ever coached.

“He understood his craft and worked at it,” Burke said. “He was our team captain in his sophomore year. He played with some great players here, to include Bryan Hill and Fred Vinson. Believe it or not, but James was a better shooter than Fred. James was deadly with that left hand.”

And what made Thompson even more special was when basketball season was over, he hit the baseball field for legendary Chowan coach Jerry Hawkins.

Now, Thompson carries on the tradition as a high school boys basketball coach.

“He’s an outstanding coach and a credit to his community,” Burke remarked. “He’s a first class young man.”

As the head coach at Culpeper High School, Thompson has a 154-63 coaching record over nine seasons.

“I give honor to God for this,” said Thompson of his Hall of Fame induction. “Coach Burke recruited me after I had played only one year of (high school) basketball. Two days later he offered me a college scholarship.

“Chowan is so special to me,” Thompson added. “I left Chowan overprepared, and not just in basketball but in academics as well. Chowan was the right place for me to get started. It was the blueprint for my adult journey.”