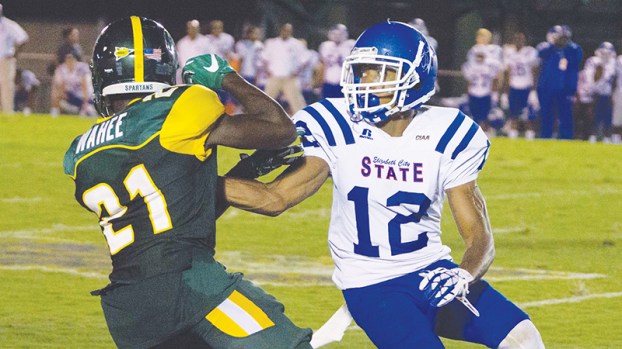 Cherry, a senior, made the All-CIAA First Team as a defensive back. The Lewiston native led the league in interceptions with four and collected 49 tackles – 43 solo – in 10 games for the Vikings which averaged out to nearly five per game.  Cherry also broke up 17 passes and three times made tackles for loss.  Elizabeth City State finished at 5-5 under first-year head coach Earnest Wilson.

Bembry competed in 10 games for the Hawks.  The Disputana, Virginia native notched 27 tackles over the course of the year (14 solo, 13 assisted) with 6.5 tackles for loss (24 yards), four sacks (10 yards) and one forced fumble. Boone garnered CIAA Player of the Week honors back on Oct. 17.  His efforts on the offensive line led to Chowan racking up 631 offensive yards in a 54-21 win over Virginia Union University.

Carter, a native of Raville, Louisiana led the CIAA with 1,099 receiving yards on the season.  He recorded 50 receptions with nine touchdowns for the Hawks.  Dixon completed 164 passes this season for a staggering 2,449 yards with 19 touchdowns on the year.  He also claimed the Chowan single-game passing record back on Oct. 15 when he completed 22-28 pass attempts for 412 yards in a 54-21 win over Virginia Union University.

Wyche rounds out the list of All-CIAA Second team honors.  Over the course of eight games, Wyche notched 33 tackles with 24 solo stops on the season.  He recorded eight tackles for loss with seven sacks, two fumble recoveries and two forced fumbles.

Nolan earned a spot on the CIAA Honorable Mention Team after notching 106 rushing yards for two touchdowns and hauling in 50 receptions for 830 yards with four touchdowns.  The Brick, New Jersey native also threw three touchdown passes this season for the Chowan Blue and White.

The Chowan football team posted a 6-4 overall record and 4-3 mark in CIAA play.  The Hawks recorded a winning season for the second consecutive season; a first for the team in the NCAA Division II era.

These players will be recognized Saturday Nov. 12 in Salem, VA at the 2016 CIAA Football Championship game between Bowie State and Winston-Salem State Universities.

GATESVILLE – What started out well certainly didn’t end the same way here Friday night. Despite racing out to a... read more