While Hertford County and Gates County have conference titles on the line in their games, Bertie and Northampton are looking to improve their playoff positioning in the final week of the regular season.

For the first time since 2009 Hertford County pulled off a win against Northeastern last Friday night, 13-12.  The Bears’ win produced a three-way tie for first place atop the 2A Northeastern Coastal Conference race.

“It was a great win in a great football game,” said Hertford County coach Terrance Saxby. “We swarmed on defense and offensively we made big plays.” 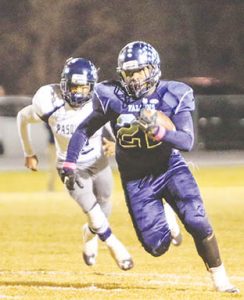 Shayquan Smallwood carries for Bertie in Friday night’s win over Pasquotank. The Falcons have a shot at their first winning season since 2007 with a win this weekend against Edenton Holmes. | Photomedoc.com / Stephen Ferguson

“First Flight is a fundamentally sound team,” continued Saxby. “They are disciplined and don’t turn the ball over.  They are not going to beat themselves.”

“We have to maintain our level of focus and intensity and also have the same energy we had in our last game,” concluded Saxby. “It’s a big game for us as it’s for the conference championship.”

Bertie did something last weekend not seen at Roy Bond Stadium in three years: win three football games in a row when they downed Pasquotank in their home finale, 28-14.

“We executed our game plan,” said Falcons coach Grantley Mizelle. “We ran the ball, we had good blocking by our offensive line, and our defense played well.”

“Edenton’s a very good team,” added Mizelle. “They run the triple option offense. They have a very quality quarterback, they’re sound on defense, and they have an outstanding coaching staff.”

The Falcons enter their regular-season finale without sophomore quarterback Anron Bond and senior receiver Travone Rascoe, who are both out for the rest of the season due to injuries.

“Offensively we need to run the ball to set up our passing game.  On defense we have to play our assignments to stop their option attack.  We also have to win special teams,” Mizelle closed as the Falcons go for a fourth straight win for the first time since 2007.

“It was a tough loss for all of us,” said Red Barons coach Matt Biggy. “Camden played good offensively as they made plays when they had to.  We got ahead early, but couldn’t hold the lead.”

“Plymouth is a good team,” said Biggy. “They are the defending state champs and are undefeated in the conference this year.  They run the ball well, they have good speed, and their defense is aggressive.”

The Vikings haven’t tasted defeat since being shut out by Edenton Holmes back in September.

“We have to try to slow them down on defense and offensively control the line of scrimmage,” concluded Biggy. “We have to continue to run the ball and score.”

Last Friday Northampton County lost to Tarboro for their second straight loss in their final home game of the season.  This Friday the Jaguars (4-6, 1-3, 2-Rivers) close the season at Rocky Mount Prep (3-6, 0-3, 2-Rivers).

“Rocky Mount Prep’s coach used to be at North Edgecombe,” said Jags coach George Privott. “They run the wishbone offense and have a 4-4 defense. They’ve had a tough year so far.