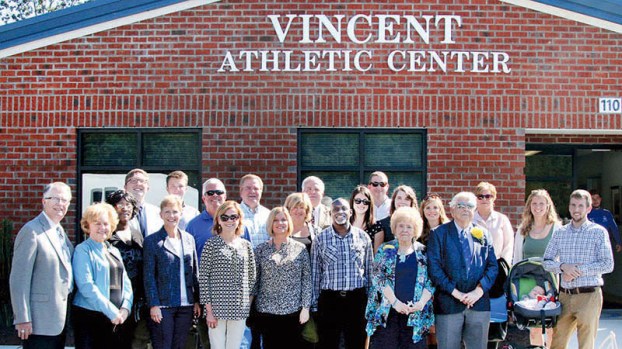 Hugh and Janet Vincent (second and third from right on front row) are pictured in front of the Vincent Athletic Center with family members and friends along with Chowan University President Dr. Chris White (front row, left). | Contributed Photo

MURFREESBORO – The growth and expansion of Chowan University continues with the opening of the new Vincent Athletic Center.

A brief opening ceremony led by Dr. Chris White, President of the University, took place in front of the facility on Oct. 15. Over 200 guests, friends, and athletes were in attendance for this historic moment.

Located near the Helms Center, the Vincent Athletic Center provides locker rooms, coaching offices, and a team room for four intercollegiate sports: Men’s and Women’s Soccer, and Men’s and Women’s Lacrosse, all of which will compete in the Conference Carolina’s athletic conference beginning Jan. 1.

The facility is named in honor of Hugh and Janet Vincent, in recognition of their service and support of Chowan University over many years. As long-term residents of Murfreesboro they have been an integral part of the growth and development of the University. Hugh has served multiple terms as a trustee and is a former chair of the board. He was inducted into the Jim Garrison Athletic Hall of Fame in 2014. Janet serves as a member of the Friends of the Library and Friends of Teacher Education organizations at Chowan.

The Oct. 15 event began with the national anthem sung by sophomore music major James Conley of Virginia Beach, VA. A flag was raised by local veterans, who were joined by representatives from each of the athletic teams present. The flag and flagpole stand in memory of the Vincents’ youngest son, Kevin Douglas Vincent. Following, a prayer of dedication was offered by Rev. Mari Wiles, Minister to the University.

“The Vincent Athletic Center represents the University’s commitment to continuing the rich athletic tradition established over many years,” said Frank Rose, Jr., Chair of the University’s Board of Trustees.

As Rose continued to welcome guests, he added, “Just imagine with me, not only did this building not exist a year ago, but we didn’t have a men’s lacrosse team a year ago. In just 12 months, both are in place and represent great additions to the athletic program.”

Following the welcome Dr. White made remarks saying, “The relationship between this family and this University is rich and lengthy. Hugh continues to be a great supporter; he was on the search committee that brought Linda and I here. He loves athletics and has a number of endowed athletic scholarships. This (facility) is just the latest in a series of things he has done.”

Ozzie McFarland, Vice President of Athletics, approached the podium, followed by two student-athletes who expressed words of appreciation to the Vincent family.

“Today’s opening will always be a monumental part of our history because this building is now a part of our prosperity,” said Victoria Baez-Quiroz, co-captain of the women’s lacrosse team. “It is now the shelter where the athletes inside can come together and grow. I humbly thank the Vincent family and all those who have contributed to making this new center possible. I thank you all for our very first home.”

Jamie McNicholas, men’s soccer student-athlete, added, “I think the building itself is a great symbol of just how far the program has come. We are honored to have been given the privilege to use this facility to help us as athletes and collegiate teams. It will help us attract attention from a lot of other student-athletes who hopefully have the same goals as us to bring to the school.”

Dr. White presented the Vincents with a framed picture of the new facility and the ceremony concluded with an official ribbon cutting. Guests were invited to tour the state of the art facility after the ceremony.

To learn how you can support the growth and development of Chowan University, contact Vice President for Development John Tayloe at tayloj1@chowan.edu or (252) 398-1233.