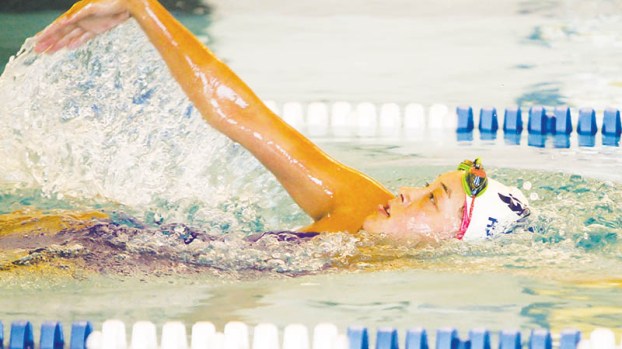 Chowan University’s Kjahna O picked up a pair of individual first place finishes Saturday and swam one leg of the winning 200 meter relay as the CU women’s swim team won its first ever swim meet at the Bynum Brown Aquatics Center. | Next Level Photos / Charles Revelle

MURFREESBORO – The Chowan University women’s swim team earned their first dual-meet victory in program history Saturday afternoon in the Bynum Brown Aquatic Center on campus.  The Hawks scored 136 points over the course of the competition to earn the win over Columbia College while the Koalas compiled a team score of 84.

Saturday also marked the first-ever home meet for the Blue and White.

Chowan captured a first place finish in all but two events.  In the opening 200 meter medley relay, Julia Chmielewska, Kjahna O, Megan Reid, and SheAyre Bowles edged the Koalas by just under three seconds; posting a winning time of 2:06.48 in the event.

Keitra Lloyd swam the 800 meter freestyle in 10:25.65 to pick up her first of two first place individual finishes of the afternoon.  O earned a first place finish in the 200 meter freestyle after finishing the event at the 2:13.91 mark.    In the 100 meter backstroke Chmielewska posted a winning time of 1:07.19 and defeated two Columbia competitors to earn the individual win.

Cassie Adams of Columbia won the 100 meter breaststroke.  She completed the event in 1:22.03.  Sarah Hull followed in second place with a time of 1:31.70.  Lloyd handed the Hawks nine additional points in the meet after competing unopposed in the 200 meter butterfly.  She posted a time of 2:44.01 for the Hawks.

Kenya McCray captured her first win of the day in the 50 meter freestyle.  She clipped Cydney Donnelly of Columbia by just over a second with a winning time of 27.63.  Reid followed in third place after finishing at the 30.21 mark.

McCray kept the momentum rolling for the Hawks in the 100 meter freestyle.  She earned a first place finish in the event with a time of 1:00.69.  Bowles was close behind at 1:02.76; good for second place in the five-swimmer event.

Chmielewska picked up her second individual win of the afternoon in the 200 meter backstroke.  She defeated three Columbia competitors in the event with a winning time of 2:28.55.

Hull recorded a second place finish for Chowan in the 200 meter backstroke.  She finished the event at 3:19.87.  In the 400 meter freestyle, O and Lloyd earned first and third place finishes, respectively.  O won the event with a final time of 4:48.29 with Lloyd following at the 4:59.94 mark.

In the 200 meter freestyle relay, Bowles, Lloyd, O, and McCray teamed up to earn a first place finish.  The Hawks defeated Columbia handily with a winning time of 1:52.55 in the race.

Chowan returns to action on Nov. 4 when the Hawks travel to South Carolina to take on Limestone College.

It’s home, sweet home for the majority of the high school football teams in the Roanoke-Chowan area this Friday (Oct.... read more