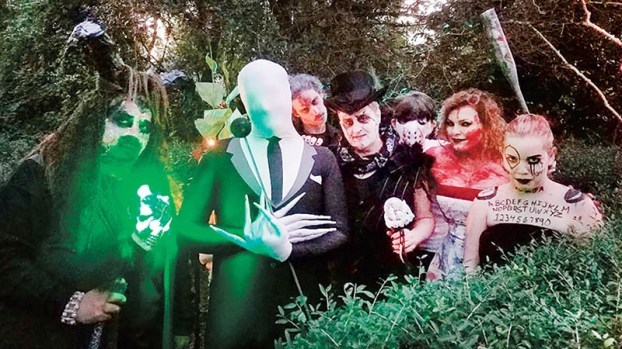 From left, Jill Gadsden, Bobby Hoggard, Daniel Dortch, Tommy Hurdle, Carson Jager, Elaine Mobley and Eleanor Boyd were just a few of the culprits that triggered screams of terror from those daring to enter the Historic Haunt in Murfreesboro. | Photo by Amy Brown

MURFREESBORO – For the last three years “What’s Happening Entertainment” and the “Flanagan House Bed & Breakfast have donated their Murfreesboro Historic Haunt to the community, and along with tons of great fun and community loving folks from all over Hertford County have created an event that is now a Halloween tradition!

Friday night did not have a huge crowd mostly due to the wet weather. 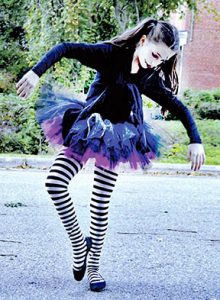 Reese White was among an eclectic mix of volunteers that produced spine tingling chills among those experiencing the Historic Haunt. | Photo by Will Metcalfe

Saturday was the winner though. Temperatures dropped, a breeze blowing through the night air, sending a chill down the spine of those waiting in line for such chills.

Tour guides Tim Flanagan, Hope Miller and Victoria Newcombe led the crowd through the experience of the 2016 Murfreesboro Historic Haunt.

As the groups exited the rec area and head towards the cemetery, and site one of the haunt, the music, talking and laughter fades to back. The path ahead turns to black. Conversation among diminishes to a quiet anticipation. Getting scared is one thing, sudden and abrupt. Knowing you will be scared adds a longer lasting element with a pinch of dread in the mix.

Massive two hundred year old head stones stared ominously, exposed by the flickering torches that danced in the breeze. Making a left and heading towards the ravine, banter from the jester like druid tour guide kept the group off balance while they approached site two, and the home of Wolf Rider, or known to some as Victor Chilaka – a school teacher by day, and werewolf biker by haunt. It was the slight sound of chains dragging on the ground that first alerted the group to his presence.

With the first scare under their belts the group became more of a flock as they huddled together knowing it was game time. They crossed the dark ravine bridge, with only the lights of the flickering candles and the lantern of the guide to light the way. Waiting on the far side of the ravine was Susan Hodges Martin as the Dead Farmers Daughter. Armed with a pitchfork and some Halloween attitude, she elicited screams and gasps as she came upon the tour asking if they saw her daddy.

Proceeding down Broad Street and crossing to the cobble stones sidewalks that lead to the Ginger Bread House you could hear the high pitched rattle of the Marsh Witch named Baby Doll, played wonderfully by Amy Brown of Ahoskie. The tour slowly passing Baby Doll with apprehension and funny looks, they really were not paying enough attention to what lay ahead.

Just past the Ginger Bread House loomed the Wheeler House, beautiful by day and foreboding by night. The guide led the group down a dark torch lit path that housed two shocking characters, the Ripper and the Cultist played by Alexander Jones and Parker Jones of Murfreesboro. Coming at the frightened people from in between the torches the two boys did a great job infusing their dark energy upon those susceptible to their torment.

Wait! What who is that? Are they with the tour? No they are dead letterman and movie star portrayed by Doug and Megan White of Ahoskie. They infiltrated the group by passing as normal people, and then surprising them with horror filled glee!

On the spooky back porch of the historic Wheeler House were the two Jigsaws, played by returning haunter Claire Revelle and Alana Hull of Murfreesboro and Ridgecroft School.

Lurking in the deep recesses of the yard, back near the adjoining vineyard, hid the infamous Hertford County Madman played by Norman Askew of Ahoskie. 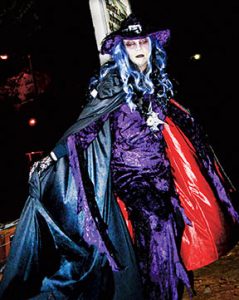 Allison Ayscue Jenkins – aka Seraphina the Witch – joined three other frightful creatures at the Bridge of Doom, part of the annual Historic Haunt. | Photo by by Will Metcalfe

Having made it from the eternal dark depths of the Wheeler yard and onto Fourth Street, the group was greeted by an Angel of Terror as found in young Addie Askew. Of course the Jigsaws and the Madman came out of the shadows to help hurry the people along their way!

Next up was the Garden Maze. Sounds lovely right? Not tonight it wasn’t! The eclectic mix of characters made many run, scream and beg for mercy. The widely talented Gallery Troupe and friends made up the maze. Characters like the Zombie, the Evil Voodoo Witch, the Murdered Bride, a Living Voodoo Doll, the Conjurer, a human Ouija Board, and Killer Joe just flat out terrorized people as they made their way through the dark foggy paths of the maze. Tommy Hurdle, Bobby Hoggard, Jill Gadsden, Jordan Martin, Daniel Dortch, Eleanor Boyd, and Brandon Jager of Gallery Theatre fame, and Elaine Mobley of Ahoskie really delivered on the mayhem!

Crossing the street to the Blacksmith Shop was the location of Kevin Ray Williams and his rendition of the Blacksmith Devil….loud, obnoxious and intimidating. He was not alone though, for in the darkness a shrill scream could be heard of the tormented White Witch, held prisoner by the Devil and only to be released upon the group’s arrival. The White Witch perfectly played by newcomer Claudia Rowe of Ahoskie.

Next up was the Tin Shop and the site manager family who run it. The Pauleys! The Tin Shop, all darkened, is where a giant spider lay in its wake.

Across the street and behind the Rae Museum is the Winborne Courtyard where two creatures of evil, the Jackal from thirteen ghosts played by Kayla Higgins of Murfreesboro, and Lumberjack Dan portrayed by Emmanuel Williams also of Murfreesboro. The loud banging, the shivering scream of the Jackal, the start of the chain saw was enough to get the group jumping in horror.

Streetlights brightened the experience briefly as the tour walked down Williams Street, passing the Print Shop with local favorite Rusty Boyd and his character Rustystilskin and his cauldron of candy.

Break time after a scare fest, and some energy for what was coming….zombies, two of them coming out of the shadows, one from behind and one in front. Matt Meyers of Folk City Tattoo and his friend Derek Stika filled those roles.

The Ag Building lay ahead in the darkness. Blood lighting and torches were the clues as to the tour’s next path. The three chambered building houses some amazing artifacts of history, but on this night it held a family of vampires. Led by Michelle Harrell Tann of Ahoskie, the mix bag of vampires were played by Brittany McMillan, Troy Tann and her eclectic mix of volunteers.

Last, but not least, after narrowly escaping the hungry vampires, came the Bridge of Doom. New this year to the haunt, this bridge connects from Williams Street to the Historic Cemetery and final site of the haunt and manned by Tony Jenkins (Jason), his wife Allison Ayscue Jenkins (Seraphina the Witch), young Marlon Künstler and Carson Jager. This site featured confined bridge terror, fog spookitivity and lighting to enhance the overall eeriness of the Bridge of Doom.

Lastly, entering the darkest part of the cemetery, the group was led to stand in front of a white coffin propped up against the ancient wrought iron fence. Go ahead and open it someone. There was always a brave soul who would do it, only to reveal the famous Cemetery Zombie played by Mike Vick of Rich Square. He gets them every year! Follow this way as the guide turned and headed down a wide candle lit path heading behind the Hertford Academy. A special thanks as always to the Town of Murfreesboro who helps every year with a couple of street light turnouts and barrels. Thank you to the Murfreesboro Police Department who puts up with the haunt each year. Thank you to all the attendees and volunteers.

AULANDER – The Town of Aulander took long lunch break on Friday of last week to honor its employees and... read more