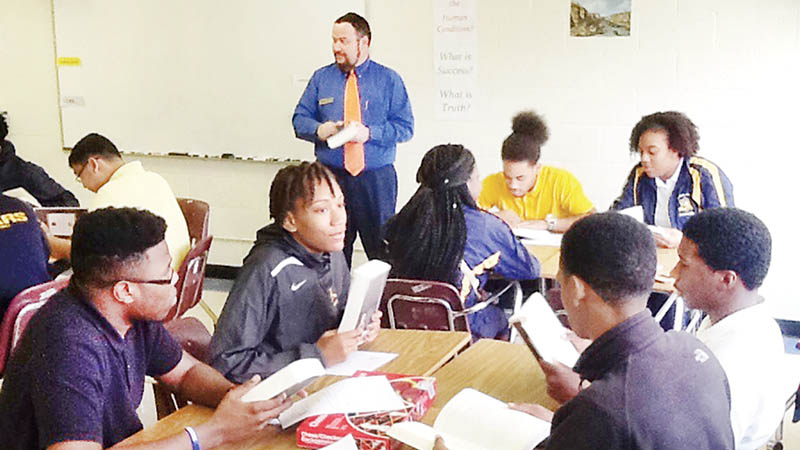 WINTON – As a result of choosing to teach a new text of “Adventures of Huckleberry Finn” to his students at C.S. Brown Stem High School, English instructor Hugh H. Davis and his students (juniors in the 2015-2016 school year) are featured in an article in the latest issue of The Mark Twain Journal (Volume 54, Number 2, Fall 2016, pp. 60-70).

In 2011, with much publicity, some quite negative, Mark Twain scholar and Auburn University at Montgomery English professor Alan Gribben edited Mark Twain’s “The Adventures of Tom Sawyer” and “Adventures of Huckleberry Finn”, placing both in a single volume, most notably eliminating the “n-word,” replacing it with the word “slave.”  The reaction to the edition was mixed from student to scholar with many considering it censorship for the sake of political correctness.

Davis was in that camp until he attended the 2013 International Conference on the State of Mark Twain Studies and heard Dr. Gribben present his reasons for the new edition. Davis said, after learning about Dr. Gribben’s planned presentation, he attended the session with the intention of “speaking on behalf of high school English teachers everywhere” in order to decry the new edition.

After hearing Dr. Gribben, however, Davis discovered that his perspective had changed. Dr. Gribben was correct: the novel had been dropped and marginalized by many teachers, and one of the reasons was being uncomfortable with the language.

Contacting Dr. Gribben, Davis shared his reconsideration of issues surrounding the teaching of the novel as well as a lack of resources with which to obtain copies for his classroom.  Dr. Gribben and his assistant, Dr. Irene Wong, provided copies of the dual edition (Tom Sawyer and Huck Finn) for C.S. Brown students.  The shipment of books also contained a DVD, Teaching Huckleberry Finn in the 21st Century, which explored the controversies over teaching the novels and changing them.

The study of Huckelberry Finn began with a viewing of the DVD and continued with discussions against a background of current and popular culture events that included “Straight Outta Compton”, the removal of the Confederate flag from the South Carolina capitol, the Black Lives Matter movement, and police brutality toward African Americans.

As the students considered the substitution of “slave” for the “n-word” and its effect on their reading of the text, they concluded that the issue was as much generational as classist or even racist.

The students enjoyed the study, perhaps partially because they were aware of their uniqueness in receiving the New South publication but also because of rarity in studying any version of Huck Finn.

Davis’ reflections are the subject of his article in The Mark Twain Journal, which includes the accompanying photograph of Davis and his C.S. Brown class.

Davis has also recently authored a chapter about “The Prince and the Pauper” for the book Mark Twain and Youth, edited by Kevin MacDonnell and R. Kent Rasmussen (London:  Bloomsbury Academic Press, 2016).  As a result of that publication, he was invited to participate in A Quarry Farm Weekend Symposium in Elmira, New York, on Oct. 7-8.