Herring on the comeback? 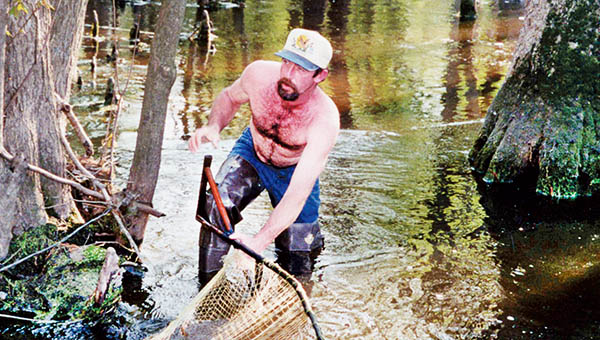 Back in a time when herring were plentiful in the Vaughan’s Creek area of Hertford and Northampton counties, scenes such as this – using a dip net for catching the tasty fish – were commonplace.

For generations, local anglers visited places such as the legendary Vaughan’s Creek on the Hertford-Northampton County line in search of a historic staple of life- herring.

Those boney fish, which migrate annually in the late winter and early spring to spawn before returning to their traditional salty habitat, graced the tables of local residents, as well as around the world. They were often a major source of food – salted and preserved – over the harsh, cold winter months, long before there were such conveniences as supermarkets.

By the turn of the 21st century, the once plentiful herring were threatened by overfishing. North Carolina Wildlife and Fisheries officials attempted to control the herring population by restricting the annual catch. However, by 2007, the state basically shut down herring harvest in hopes that their numbers would eventually rebound.

Now, nine years later, local fisherman strongly believe that the herring population has improved to the point to allow the state to take a serious look at lifting its moratorium. However, there seems to be some discrepancy between what the local fishermen and state wildlife officials have observed in the way of numbers.

Last week, local fishermen attended Board of Commissioner meetings in both Northampton and Hertford counties, seeking resolutions from those local leaders to ask the state to end the herring fishing ban.

Roger Cofield represented the Concerned Citizens of Northampton County for the Restoration of Historical Herring Fishing at the Commissioners’ May 16 meeting in Jackson.

“We seek the help of the Northampton County Board of Commissioners in the re-establishment of our right to resume herring fishing in our inland waterways,” Cofield said.

He brought with him letters of support from the town councils of Woodland and Conway seeking restoration of the right to fish for herring.

Cofield and the letters from Woodland and Conway cited an anecdote in which a man and his father-in-law fishing for white perch on the Meherrin River near Murfreesboro saw many herring and spoke to another fisherman who said he “caught herring on beetle spin,” indicating the herring are back in full numbers.

Pratt said, “Herring are at or above historic levels. There’s plenty of fish.”

The commissioners instructed County Manager Kimberly Turner to further research the matter and prepare a letter of support for lifting the ban on herring fishing by the next regular board meeting.

Cathy Rawls, Fishery Management Section Chief with the N.C Division of Marine Fisheries said May 23 in a telephone interview nothing is scheduled to change with the moratorium on herring fishing until 2020, as scheduled when the moratorium was first enacted in 2007.

Rawls said there is a bill in the NC Senate, Senate Bill 871, that mentions herring.

SB 871, called Encourage Marine Aquaculture, if passed would require the Division of Marine Fisheries (DMF) to review it Fishery Management Plan this year, with a report due Dec. 15.

But Rawls said the DMF tracks and reviews the recovery of the herring population each year already, so SB 871 would only mean DMF would have to take their findings this year to the General Assembly.

She said the DMF’s Fishery Management Plan went into effect in 2007 “with a small discretionary season”, which ended in 2015. For the past two years, she said there has been no herring harvest.

A spokesman with the N.C. Wildlife Resources Commission said over the phone last week that nothing is on the table concerning herring fishing.

Also on May 16, Bill Harris addressed the Hertford County Board of Commissioners meeting in Winton. Harris said he was there on behalf of concerned citizens of Hertford County for the reestablishment of catching herring on local waterways.

“A moratorium was put on herring fishing here about eight years ago,” Harris told the Hertford County elected leaders. “At that time the Wildlife Resources Commission indicated it would be a four to five year ban on herring fishing as they worked to bring the herring population back up.

“As a citizen of Hertford County and a frequent visitor to Vaughan’s Creek and other waterways in the county, I’ve observed over the years, especially the last two or three years, the herring population is back in greater numbers than I’ve seen in 15 to 20 years,” Harris added.

Harris said he agreed with the Wildlife Commission’s original intent to place a ban on herring fishing.

“There was a need to do so,” Harris said. “But as it stands now, it’s been 10 years and it’s at a point now that we’ve lost a generation of those who dipped herring in our waterways. There’s enough herring now to at least catch them on a limited basis. We’re not asking them to let us catch herring by the ton; we just want to catch a few as recreational anglers.”

In his research, Harris said there is current legislation under debate in the North Carolina General Assembly regarding recreational harvest of herring.

“That bill could be pushed through if we got the support of our commissioners and (state) representatives,” he stressed. “We’re asking for your help.”

Harris presented the Commissioners with documentation dealing his request for assistance from the board. The board approved drawing up a resolution in support of the request made by Harris, asking the state to lift the moratorium on recreational herring fishing in Hertford County. Copies of that resolution will be sent to the NC Wildlife Commission, NC Division of Marine Fisheries, and to the county’s two district representatives in the NC General Assembly – Howard Hunter III in the State House and Erica Smith-Ingram in the State Senate.

While Harris suggests that the herring population in local waterways is on the rebound, a 2014 report from the state cites that river herring (Blueback and Alewife) stock is depleted in the Albemarle Sound Management Area, which includes the Chowan and Meherrin rivers and their tributaries. That report shows no recreational harvest for river herring has been allowed since 2007.

The state’s report reads, “Despite the fishing moratorium implemented in 2007, river herring in North Carolina are still considered overfished. The targets for considering the stocks to be rebuilt have not been met. In particular, recruitment and juvenile (herring) abundance are still below the targets for rebuilding.”

Herring spend the majority of their life in the ocean, returning only to fresh water to spawn from March through May in coastal rivers and tributaries. After the eggs hatch, juvenile herring spend their first season in fresh and brackish waters, eventually migrating to the ocean.

The Albemarle Sound and its tributaries were historically at the center of the commercial and recreational fisheries for river herring.

Ahoskie native Charles William “Wild Bill” Cooksey was a beloved street performer during a portion of his entertainment career in... read more