AHOSKIE – Peggy Ann Barnes Poplin, age 85, passed away on March 22, 2016 at the River Trace Nursing and Rehabilitation Center of Washington, NC with family at her side. 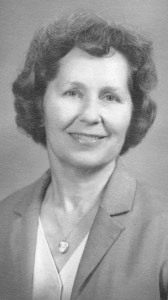 Mrs. Poplin was born in Rocky Mount on April 15, 1930, a daughter of the late Oliver Garland and Bertha Ann Jones Barnes. Peggy was a member of St. Charles Borromeo Catholic Church in Ahoskie. She graduated from Flora McDonald College, was the bookkeeper for her husband’s logging business until his death in 1969, librarian at the Ahoskie Public library, retiring at age 75, and paralleled as a homemaker.

Peggy was preceded in death by her husband, John Maher Poplin; her parents; and her brother, Oliver Garland Barnes, Jr.

A celebration of life funeral mass will be held on Tuesday, March 29, 2016, at 12:00 pm at the St. Charles Borromeo Catholic Church, Ahoskie, NC, followed by burial at the Pineview Cemetery in Rocky Mount with Father Bill Long officiating.

In lieu of flowers, memorial contributions may be made to the St. Charles Borromeo Catholic Church, 122 NC 561 West, Ahoskie, NC, 27910; or to a favorite charity of one’s choice.

Garrett Sykes Funeral Service – Ahoskie Chapel is handling the arrangements for the Poplin family and online condolences can be directed to the family by visiting www.garrettsykesfs.com.