Small in stature, but big in heart 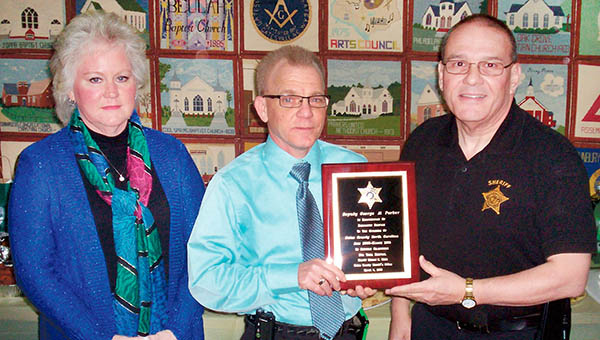 GATESVILLE – He may be small in stature, but Al Parker stands tall among his peers.

On Feb. 29, Parker ended his full-time career in law enforcement….one that was cut short after just 13 years due to health reasons.

At a function held at the Gates County Courthouse in his honor, fellow deputies, joined by other community members, saluted Parker for his work as they gathered to share a meal with their colleague.

“I hired Al not too long after I became the Sheriff here in Gates County,” said Ed Webb. “He was working at that time as a jailer over in Northampton County and he came to me to see if I would sponsor him to attend the BLE (Basic Law Enforcement) training. We were able to get him enrolled over at Martin Community College in Williamston and he immediately went to work for us full-time when he graduated from that program.”

Webb said he had known Parker all his life.

“Al is the son of George Parker, and of course everyone knows George because he cut hair for many years at the barber shop here in Gatesville,” Webb noted.

As a Gates County Deputy, Webb said Parker handled all the normal duties associated with that job, to include a patrol officer, inmate transfer officer and serving civil and criminal papers.

“He handled that job very well,” said Webb. “He was able to attend seminars and workshops that allowed him to become a great Animal Control officer. His work was recognized by the National Humane Society.”

While employed as a deputy, Parker met another law enforcement officer, Glynda Boyce. Webb said the two “hit it off” and began dating, later tying the knot.

“Al may be king of that household, but on the job Glynda outranked him because she is the Captain of our department; Al took orders from her,” Webb laughed.

Last year, Parker received the news that his heart was not operating at full strength. That forced him to drastically reduce his hours on the job, and eventually he had to retire from active duty.

“Al isn’t a big man, but he never backed down from anyone; he would stand toe to toe with his fellow deputies as they worked to protect and serve the citizens of Gates County,” Webb said. “He has the heart of a giant.”

“I didn’t want to retire this early in my law enforcement career, but I did so because my heart began to fail me,” Parker said while volunteering his services for traffic control at a March 4 fundraiser at A&W Outback near Eure to benefit Gates County GEMS.

“Actually, I feel much better now that I’ve retired from full-time duty,” he added. “Working as a law enforcement officer causes a lot of stress. Ever since I retired it feels like a big weight has been taken off my chest. As a matter of fact, at my last check-up my doctor said my heart has improved somewhat.”

Webb said Parker will remain as a sworn law enforcement officer and work when needed as a reserve deputy.

“I wish him well; he just needs to slow down and take care of himself,” Webb concluded.

Roanoke-Chowan will benefit with Connect NC

Joyce Dilbeck of Colerain casts her ballot on Tuesday during the 2016 Primary Election. She was among the 3,926 registered... read more