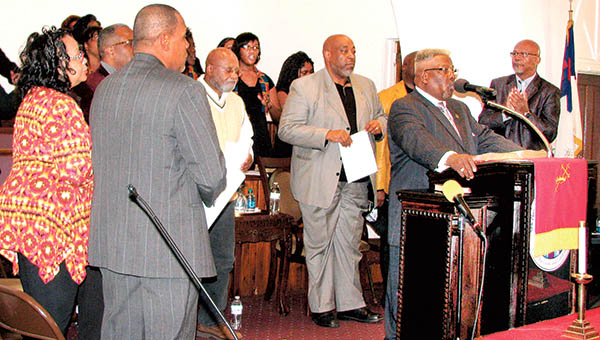 WINDSOR – Bertie County citizens gathered together at the Courthouse here Monday morning to honor and pay tribute to the dreams of Dr. Martin Luther King Jr. on the holiday celebrating his birthday.

The festivities began with a rendition the King’s “I have a dream” speech of the 1961 March on Washington by Rev. Jerry Mebane.

After his stirring rendition of the speech, the audience lined up behind the Bertie High School’s JROTC honor guard and marched across town singing “We shall overcome.”

The marchers traveled to Zion Bethlehem Baptist Church to warm up from the frigid march and prepare to hear from several local preachers who would be speaking about the need for peace, love, and coming together for betterment of everyone.

Following inspirational music played by Zion musicians, the Rev. John W. Felton said he was glad Zion was again chosen to host the annual march and celebration on King’s dream of a time without hate, when all people were equal in the sight of the Lord and the sight of the law.

Felton welcomed the standing room only audience and many “preachers, profits, and pastors” in attendance.

Zion Deaconess Faye Anderson introduced the “honored guests” to the layout of the church and welcomed everyone to the annual event honoring Dr. King and his dream.

The organizer for the annual Bertie County event is District 5, Order of the Eastern Star.

Felton then introduced the preachers who would be offering prayers in honor of Dr. King, letting them know their prayers were to be kept to less than two minutes.

With a chuckle that quickly spread throughout the church, he said, “It’s a dangerous thing to put a Baptist preacher, with a full church, in front of a microphone.”

And then he prayed that God would look after President Barack Obama and the entire nation.

He said the leaders of the nation should bring all people together. “We’re not there yet, Father,” he said of Dr. King’s speech,” but we’re going to make it with Your help.”

In his prayer, Rev. James S. Collins of Mt. Ararat Baptist Church asked God to let nothing separate us, citing the drugs and murder sent by the devil to do just that.

Collins prayed, “Let no one separate us.”

Christa Faison-Hall fired up the audience with her solo “Break every Chain.”

The Rev. Alma Lucas of Mount Olive Baptist Church prayed for the education system in the area, for all the teachers and administrators and employees who give so much and the students and parents who give it all they have.

The choir sang, “What is This?”

The Worthy Matron Phyllis Spraggins of the Eastern Star, and others, took up the offering.

County Commissioner John Trent said King’s message of peace and love was for everybody and proclaimed all people to be equal.

Then the star of the day came to the microphone to speak about the young people of the area.

Jovian McMillan, 12 years old, began with a brief biography of Dr. King and then became more like a Baptist preacher than a student in school in his prayer to God.

“Dr. King once said, ‘Injustice anywhere is a threat to justice everywhere,’” McMillan said. “God gave us all gifts…but there is one gift he gave everyone – a mind…We humans must pray to God in a higher state.

“When you feel like you have done enough, you must continue,” the young man said. “Dr. King said once, ‘I want to be a white man’s brother, not his brother-in-law.’

Rev. Felton brought McMillan on stage after his stirring prayer and chastised TV media for not having its cameras rolling for such a stirring speaker rather than somebody getting arrested for some violent act.

Tesha Giddings of Hertford County then paid tribute to Dr. King with an excerpt of his most famous speech.

Rev. Darren Whitehurst of First Baptist Kelford prayed for the many organizations is Bertie County dedicated to helping others.

Finally, the Rev. Rob Lewis, pastor of Conocanary Baptist Church, reminded the parishioners that the Civil Rights movement started in the churches and were led by the churches.

The audience was then dismissed for a meal prepared by the ladies of District 5 Order of the Eastern Star.