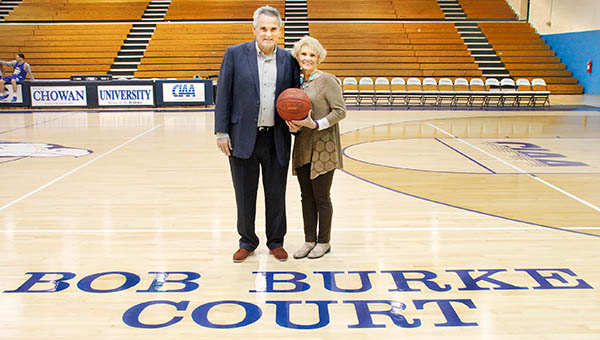 Former Chowan University head basketball coach Bob Burke stands proudly with his wife on the court at the Helms Center that now bears his name. | Staff Photos by Cal Bryant

MURFREESBORO – He has logged millions of miles from the tough streets of Staten Island, NY, to the oil fields surrounding Houston, Texas, to the exotic beaches of Hawaii, and to the multi-million dollar arenas where the world’s most elite players showcase their talents within the National Basketball Association.

But if you ask Bob Burke where he feels most at home, you’ll receive a one-word answer – Chowan.

That university is now returning the “love” as Chowan will honor its former coach, a man that led the then Braves to well over 400 wins and three trips to the National Junior College Athletic Association’s championship tournament, by formally naming the basketball court inside the Helms Center as “Bob Burke Court.” The dedication ceremony will be held at halftime of the Chowan men’s basketball game against Virginia Union University on Saturday, Jan. 30. That game tips-off at 4:05 p.m. 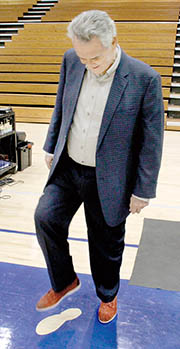 The honor of having the court named in his honor comes complete with this shoeprint within Chowan’s team bench area. Burke was famous for stomping his foot on the sideline.

Former Chowan players and coaches, members of the Burke family, students of the university and fans from all over northeastern North Carolina and southside Virginia are expected to fill the Helms Center that day to pay honor to an individual they feel put Chowan basketball on the national map.

“Without good players, my name wouldn’t be on that court,” said Burke during an interview on Wednesday. “I’m indebted to those players, but I’m also indebted to my family. My family has always been a part of whatever success I’ve been fortunate enough to enjoy over my career.

“We may have eventually left Murfreesboro and landed in Hawaii and later with my job in the NBA, but I’m forever a Chowan man; this is the place where I got my identity as a coach,” he continued. “Chowan is who I am and I’m so honored that this great university has chosen to honor me in this way.”

Burke called Murfreesboro a perfect place to raise his family.

“Everybody knew us and looked after us, especially our children; it was a great place to grow with your family,” he noted.

“It was a family atmosphere here, and it remained that way; as a matter of fact I felt my family grew due to all the students and staff at the schools I worked at and then serving as the superintendent,” she added. “I feel very strongly that this town, this county and the other communities near here were a big part of Bob’s success and Chowan’s success due to their overwhelming support of the university and its athletic programs. It’s for that very reason that I encourage everyone locally to come out on Jan. 30 and be a part of this special day. We will love to see you all and reminsce about those special years our family spent here.”

Long before Burke and Chowan basketball became household words across the nation, there were some tough roads to follow and equally tough lessons to learn.

Growing up on the streets of New York City, this tough-nosed Irish-Catholic kid fell in love with athletics at an early age. He parlayed that into a ticket south, landing a spot on the basketball team at South Texas Junior College. From there he began his love affair with college basketball in North Carolina, first as a guard at Campbell University (Class of 1969), honing his skills under coaches Fred McCall and Danny Roberts.

“Coach Roberts will be here on Jan. 30,” smiled Burke.

Burke told the story of how he got out of New York.

“Back then, Frank McGuire (a NYC native who went on to coaching fame at St. Johns, the University of North Carolina and the University of South Carolina) controlled New York,” Burke recalled. “When coach McGuire took my friend, Bobby Cremins (who would later guide the basketball fortunes at Georgia Tech and on a trio of occasions recruited Burke’s talented players at Chowan) to South Carolina, that left a spot open at Campbell where Cremins was originally recruited to play.

“When coach McCall and Bones McKinney questioned McGuire about stealing away Cremins, he (McGuire) said not to worry, he would find a replacement,” Burke continued. “One of McGuire’s birddogs got me to Campbell, first working as a counselor at their camp, and then as a player for two years. Low and behold, I got to work with a guy by the name of Johnny Wooten at that camp. A lot of folks on the east coast didn’t know who Wooten was back then. He, of course, by then had led UCLA to three NCAA national championships, en route to winning 10 of those trophies. I wound up working nine camps at Campbell, seven of those were with coach Wooten. I became a disciple of Wooten’s style of play.”

After graduating from Campbell, Burke spent two years as the head basketball coach at Wallace-Rose Hill High School. At age 25, he became the nation’s youngest head basketball coach at the collegiate level at Greensboro College. He took over a team that had won a combined six games in the three previous seasons. During this three-year stint there, Greensboro won a combined 35 games.

“Back then, (NCAA) Division III and Division II were combined; we were D-III, meaning we couldn’t offer scholarships, and were playing a lot of D-II schools….and beating quite a few of them,” Burke remarked.

He returned to Campbell for a year, assisting coach Roberts while working in the admission’s office. He kept a small apartment in Buies Creek, traveling back to Greensboro on weekends where Jane was the principal at a middle school.

Burke wound back up in Greensboro at Guilford College as an assistant coach. There, legendary athletic director Herb Appenzeller (who also held that position at Chowan) steered Burke to Murfreesboro.

“I wanted to be my own boss, to be the head coach of my own team so I took the Chowan job in 1980,” Burke recalled. “I didn’t know anything about Chowan back then. I was interviewed by Jim Garrison and Dan Surface…they must have asked me a thousand questions.”

That was the same year Chowan unveiled its newly constructed basketball palace – the Helms Center.

“I peeped in there after that long interview and saw that brand new gym and thought right then and there that I can build a dynasty here with this type of facility,” Burke noted.

With 419 victories (to include a string of 12 consecutive 20-plus win seasons), three appearances in the NCJCAA Sweet 16, 42 former Braves who went on to play at the NCAA Division I level (to include seven that competed in the ACC), and two players that made it to the NBA (both of whom are now coaching at the highest level of professional basketball), one can say that Burke’s dynasty was realized at Chowan.

His very first team in Murfreesboro won 22 straight games, but fell one game short of earning a trip to the national tournament.

Burke’s sly smile grows a bit larger when you get him to talk about his 1983-84 squad, one that made it to the Final Four of the NJCAA tourney in Hutchinson, Kansas.

“I only had three and one-half scholarships to work with, so we had Andre McGee and Tracy Miles coming back for their sophomore year. Then we add Dave Burgess and Nate McMillan and get Tracy Battle to walk on. I knew that was going to be a special team,” he said.

McMillan, who later played for NC State on teams that reached “Elite 8” status in consecutive national tournaments, was Burke’s first NBA player (drafted by and later was the head coach of the Seattle Supersonics).

However, what many local fans have forgotten were the teams just before and after the 83-84 squad. The 82-83 team lost on a last second shot in the regional finals and the 84-85 squad finished with a 27-4 record….all of those losses were by two or less points each.

“We had eight teams here that had better overall records than the 83-84 team,” Burke recalled. “We had seven teams to play for the regional title and the right to go to Hutch, but only three made it that far.”

That was also the era when Chowan hosted the Hardees Classic, which later became the Northeastern Businessman’s Classic. The annual tournament not only featured some of the best junior college basketball teams in the nation at that time, but it wasn’t uncommon to see the head coaches of several major NCAA D-I basketball programs sitting in the stands absorbing the action and scribbling notes on which players they wanted to recruit.

And speaking of recruiting, Burke himself was the master, bringing loads of talent to tiny Murfreesboro.

“I could sell sand to Saudi Arabia,” he grinned. “But, seriously, I learned very early in my coaching career that you don’t win games with x’s and o’s, but rather with Billys and Joes. I found guys who could play and would play and practice hard, but were also good students because of how tough the academic standards were here at Chowan. I didn’t recruit jerks, I don’t tolerate jerks very well.”

Burke also developed the annual Chowan Summer Basketball Camp. At one time it was the largest team camp in the state.

Even after all the success Chowan experienced at the junior college level, Burke remained on board when the school went to a four-year institution and initially completed athletically as an independent in the NCAA D-III ranks. That meant no scholarships.

“That was a new challenge,” he said. “For the first two years we were able to get some players just because we were Chowan. But we still had to find our way because nobody wanted to play us here at our place. We eventually got it going at that level and had some really good players. I was really proud of those guys…they worked their buns off for me; they played for the love of the game.”

Among the players of that D-III era was Burke’s son, Rob, now an assistant coach at Georgia Southern University.

Burke, who after leaving Murfreesboro coached at the University of Hawaii and then in the NBA, likes what he sees now at Chowan.

“They have a president here now with a great track record and it shows with all the improvements in academics and in the infrastructure improvements on campus,” he stressed. “Athletically, things are going great here….the football team just came off one of their best seasons in years and the future there is bright; men’s soccer completed in the national finals; and both the men’s and women’s basketball teams this year are playing extremely well. I hope one day those players and coaches will be able to come back here and say the same thing I’m bragging about today. I hope their love for Chowan burns just as bright and deep as it does in my heart.”