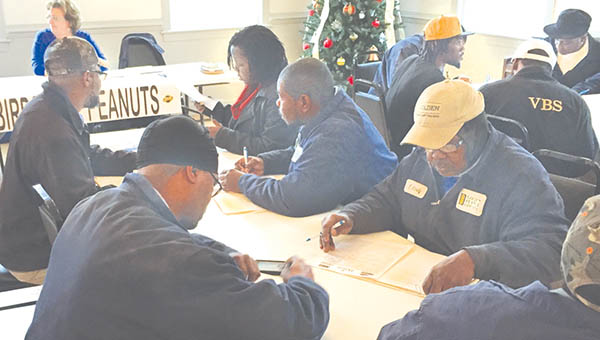 AULANDER – In early December of last year, Town of Aulander officials and the Bertie County Board of Commissioners were notified under the federal Worker Adjustment and Retraining Notification (WARN) Act of the impending shutdown and permanent closure of the Golden Peanut facility in Aulander, a community and agribusiness fixture in that community for nearly 60 years.

While an announcement of this nature is never well received, when it comes at the holiday season it brought the reality of our national economic challenges to the homes of the 81families who are impacted by this decision.

The WARN Act is a United States labor law which protects employees, their families, and communities by requiring large employer to provide 60 calendar-day advance notification of plant closings and mass layoffs of employees to local government leaders by certified mail.

According to Bertie County Commissioners’ Chairman John Trent, “It was vitally important to open up a line of communication with company executives and to advocate on behalf of these workers and their families.”

“Even if the decision could not be turned around, it was important to be certain that employees were given every bit of local support we could muster to assist with the transition,” said Trent.

Aulander Mayor Larry Drew and then Board of Commissioners Vice-Chairman Tammy Lee were instrumental in pushing this effort as well, according to Trent.

At the Commissioners’ regular meeting on Dec. 7, Bertie County Economic Development Director Steve Biggs reported to the Board that a “rapid response team” was assembled through the regional workforce development board, state agencies and business leaders to support these impacted workers during the transition.

Assistance for the soon-to-be-displaced workers included aid with preparing resumes, job applications and the scheduling interviews with prospective employers.

“One of the next steps is a job fair which is scheduled for Jan. 8 and hosted by the Town of Aulander,” Biggs told the Board at that time.

Trent spent the weeks leading up to Christmas reaching out to First District U.S. Representative G. K. Butterfield and U.S. Senator Richard Burr for support, both of whom responded immediately.

“I also have numerous emails from Golden Peanut company headquarters in Georgia, who were willing to listen and engage with local representatives, and calendars were coordinated for a meeting in early January,” said Trent.

Golden Peanut, like many agribusinesses, faces significant challenges with aging facilities as well as advancing technology which render many older processing plants obsolete such as the Aulander location.

“With each call, company officials described the difficult economic balance that must be maintained to remain competitive on a national market basis,” said Trent. “It was very apparent that Golden Peanut officials have empathy and concern for the affected workers.”

Commissioner Tammy Lee noted that Golden Peanut is the “heart and soul” of Aulander.”

“Bertie County’s efforts culminated Jan. 6 with a meeting hosted by the Town of Aulander at the urging of Mayor Drew,” said Trent.

“Representatives from Archer Daniels Midland Company confirmed the finality of the previously announced plant closure this afternoon” reported Bertie County Manager Scott Sauer in a late email to the Commissioners.

“The Chairman reported that the “upside” for this situation was the company’s recognition of our community spirit and the united effort on behalf of these workers by the Town of Aulander and Bertie County,” Sauer continued.

“There were discussions regarding opportunities for redeveloping the plant site and to capitalize on the rail spur infrastructure which we hope will continue in the near future,” the County Manager noted.

According to Bazemore, the group had a very good dialogue with Golden Peanut company representatives.

“The Town of Aulander and the Bertie County Board of Commissioners remain committed to support these workers and families during the transition and scheduled their shutdown for late February,” Bazemore said.

“Thanks to the Chairman and all who worked so hard to attempt to make this save,” said former Board Chairman Ron Wesson in expressing his enthusiasm for these efforts. “I’ve learned that brave efforts are never wasted and it might just surprise us how this effort might come back to help.”

Friday, Jan. 8 was the date of the Job Fair for the Golden Peanut workers held at the Aulander Community Building and Biggs says he has received many favorable calls from prospective employers seeking well trained and experienced workers.

At the Commissioners meeting on Jan. 4, Commissioner Stewart White expressed his appreciation to Biggs and the team in instituting the Job Fair.

“I appreciate what all of you are doing for the Golden Peanut employees and the Town of Aulander,” White said.