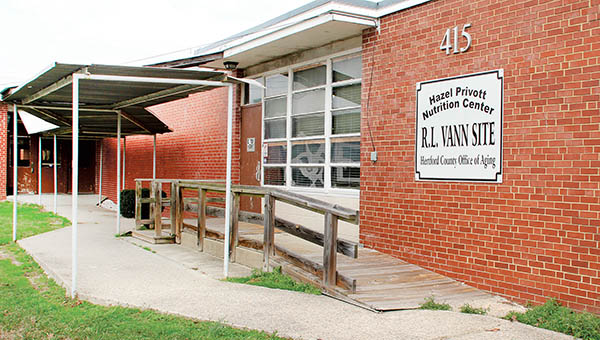 The Hertford County Office of Aging’s nutrition site in Ahoskie is located at the old Robert L. Vann School off Holloman Avenue. The facility is beset with problems, to include a leaking roof. | Staff Photo by Cal Bryant

WINTON – Its location is historic in nature, but serving meals to senior citizens in an aging structure with safety issues perhaps isn’t a good idea.

At their meeting here Monday, the Hertford County Board of Commissioners heard a presentation from its chairman, Ronald Gatling, concerning the county’s nutrition site at Robert L. Vann School in Ahoskie.

“I had the opportunity in December to visit our nutrition sites in the county,” Gatling said. “I noted the bad condition of the building at the site we have at the old Robert L. Vann School. We need to make sure that our senior citizens visiting any of our nutrition sites are in a building that is clean, safe and healthy.

“We need to do something at the Robert L. Vann site. I think we (the county) own some land behind Vann School and I would like us to perhaps think about using the property to build a new nutrition site, a steel framed building. Let’s investigate how much that will cost,” Gatling added.

Commissioner Curtis Freeman said he would like to see how much it would cost to renovate the nutrition site at Robert L. Vann, which is currently housed in the cafeteria of the old school that was constructed in the 1940’s.

“I don’t know if I would waste that money,” Gatling said of Freeman’s renovation idea. “The roof leaks; there’s a bad smell in there. It’s disgusting. There was a reason they closed that school for children to use.”

Gatling said the county needs to be proud of the fact it moved the Murfreesboro nutrition site to a safer, cleaner building, and that the county was possibly looking at expanding its number of nutrition sites by using the Amanda Cherry Community Center in Harrellsville. The county also operates a nutrition site at the Senior Center in Winton.

“If we can’t renovate the Vann site or if there’s no room to build a new one behind the Vann School, then we need to look at another location in Ahoskie that we can use as a nutrition site,” Gatling remarked.

Hertford County Manager Loria Williams said safety inspections were routinely performed annually at all county-owned buildings. She admitted that the nutrition site at Robert L. Vann had been a previous topic of discussion, to include a leaking roof and problems with the light fixtures.

“We have already began looking around for alternatives to that site,” Williams said. “We are also looking at a roof replacement at the Vann site. We do own a lot behind the current site, but there is an issue there with accessing that property because it’s land-locked. The issue is once we gather all this information about either a new site or a renovation of the current site, this board will have to decide on what route you want to take.

“Please also be advised that if you do choose to build a new site or relocate to another site in Ahoskie, that doesn’t happen overnight. We still have senior citizens visiting the Ahoskie nutrition site where it is currently located and they still have to put up with a leaky rook and some electrical issues; so what do we do in the short term about safety,” Williams asked.

In direct response to Gatling’s request, Williams said she will gather information on the costs of erecting a new metal building for use as the Ahoskie Nutrition Site, as well as what it would cost to renovate the existing facility.

“I’ll also bring back some of the other options that have been looked at, as they relate to where the best location is to generate more participation in the meals provided to senior citizens,” she stressed. “That information could be ready as early as your first meeting in February, but you still need to be reminded that we need to do some short-term things at the existing site since that’s still in use at this time.”

WINTON – As is sometimes the case, a good, strong front bumper is better than a wickedly fast sports car.... read more