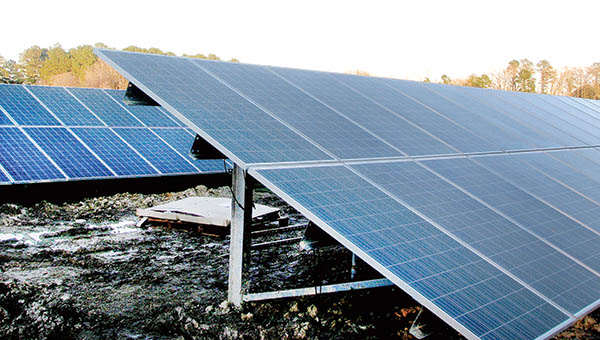 Solar panels are now being installed in this area of Woodland, located behind the old Shrimp Feast site off US 258. Town officials have approved three solar farms, but rejected a fourth. | Staff Photo by Keith Hoggard

WOODLAND – Mayor Kenneth Manuel wants to get the word out that the Woodland Town Council did not reject a fourth solar farm for trivial reasons.

The story about rejection of the solar farm has gone viral since it was first published in the Dec. 8 R-C News Herald. He said he and the town hall staff have been inundated by emails and phone calls, sometimes quite vulgar, from around the world over the Town Council’s decision on Dec. 3 to reject the rezoning of a parcel of land outside the town’s northern border. That land is within Woodland’s ETJ (Extra Territorial Jurisdiction), meaning it falls under the auspices of the Town Council for zoning/rezoning.

Had the rezoning issue passed, a new solar farm would have been built there.

Woodland already has three solar farms slated for construction on plots of land that were rezoned by the Town Council. One of those three, Community Energy Solar, is currently building a massive solar farm that is visible from Main Street (Hwy 258) within the town.

After construction is complete, Manuel said that solar farm would disappear behind foliage that will be planted on a 400-yard buffer between where the solar panels will be placed and the main roadway.

He wants to assure the public that the Dec. 3 rejection of Strata Solar Company’s proposal for a solar farm was not a spur-of-the-minute decision.

Manuel took office Dec. 3, but he attended many of the Town Council’s previous meetings where solar farms had been discussed and all votes to rezone the land had been accompanied with public hearings.

Manuel said members of the Town Council had become concerned about being overcrowded by solar farms before the Dec.3 meeting.

During the Dec. 3 meeting, Jean Barnes said she represented many citizens who rejected any more solar farms coming to the Woodland area and presented a multi-page petition to the Council signed by numerous concerned citizens.

“With that fourth proposal, if that had come to be, we literally would have had solar farms on each of the four compass points of our town,” Manuel said. “That just wasn’t doable.”

He explained that for the first three solar farms, people in town simply didn’t attend the meetings and didn’t pay attention to what the Town Council was doing in regards to rezoning issues that led to the approval of that trio of solar facilities.

Now that people can see a solar farm under construction off of Hwy. 258 in town, “concerns have grown.”

Manuel said the Town Council did not base its decision to reject the fourth solar farm solely based upon what was said by the public during the Dec. 3 meeting, including one allegation that the great number of solar panels will “suck up the energy from the sun,” thus siphoning off the energy that plants need to grow.

Instead, the council members have been studying the issue of solar farms for months, listening to the solar companies, independent experts, and others.

Manuel said this experience is bringing the town closer together.

“We’re going to move on,” Manuel said. “We will be vindicated by the truth.”

He added that the small, 800-person Town of Woodland is doing its part to bring clean energy to North Carolina.

“I wonder what the people criticizing us are doing about global warming and clean energy,” he said. “Woodland is doing its part.”

A new statement from the town can be found on it web page at: http://townofwoodlandnc.com/

In a related matter, a correction needs to be published from the News-Herald’s article from Dec. 8 (“Woodland rejects solar farm”).

In that article, Woodland resident Mary Hobbs was attributed to having said her home in Linden Street is surrounded by solar farms. Actually, Hobbs said her home is surrounded on four sides by farms, and if one of the property owners of those farms wanted to lease their land to a solar company, and that was approved by the town, then she felt her house/property would lose value and she would not be able to sell it.