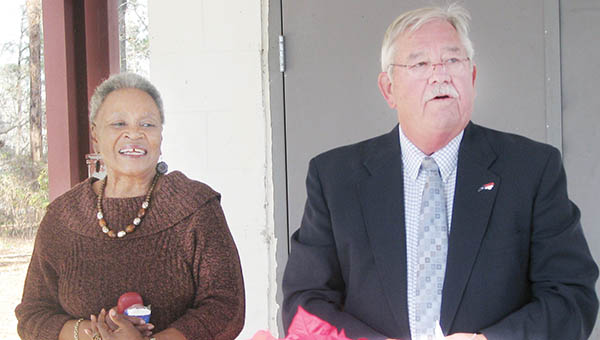 MURFREEESBORO – The townspeople of Murfreesboro gathered at Riverside Park on Saturday to honor the tireless efforts by former Town Councilwoman Gloria Odum for her work to make the park beautiful, operational and a place families can gather to play and have picnics.

Odum resigned from the Town Council over the summer to move to Durham to be closer to her children, but later in the meeting promised she would coming back from time to time to visit and catch up.

The pavilion at Riverside Park has been named after Odum because of her dedication and hard work to bring the concept to fruition.

Murfreesboro Mayor John Hinton began his presentation by noting the wonderful, unseasonably warm temperature and bright sunny day. He said, “As you look around, you know God loves Gloria Odum.” 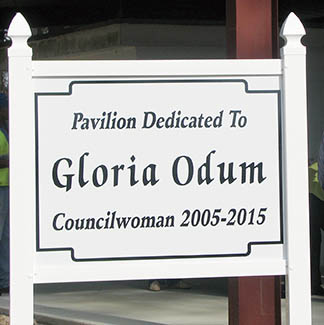 The end result of Odum’s work as the pavilion at the park was named in her honor during a ceremony held Saturday.

“She served well; she served with respect, and she served always, always without impartiality or prejudice,” Hinton said. “She always told the truth.”

He added, “She will always be remembered for her 10 years as commissioner of Parks and Recreation. In that job and through those duties she set up summer camps, established youth league sports for all the sports: T-ball, flag football, soccer, basketball…

“She had health screenings and seminars to teach home making. She worked with communities and schools and I think most importantly she is the power behind this park,” said the mayor. “It has changed drastically and this portion right here is just the beginning because there’s more planning for the other side that will be developed into athletic fields and so forth.

“We’re proud of her and we’re proud of this day,” he said. “I can honestly say with my dealings with Ms. Odum, this fine lady came to Council with no personal agenda. She never put personal gain above personal honor. That is a wonderful thing to say about a person.”

Walter Thomas, now serving as chairperson for town’s Parks and Recreation Advisory Board, said Odum had been very persistent in her efforts to improve the parks in town. He said he didn’t understand her persistence until later when the parks started coming together where families could enjoy a beautiful, safe environment.

“The park has really grown,” he said.

Mayor Hinton then introduced Hertford County Commissioner Bill Mitchell Jr. He said the commissioners were instrumental in getting playground equipment for the Murfreesboro parks, which he said was the start of rejuvenation effort at Riverside Park.

“It gives me great pleasure today to be with you today to celebrate former councilwoman Gloria Odum,” said Mitchell. “She worked hard for the citizens of Murfreesboro.

“As we stand here in this park, which looks great by the way, we see some of her efforts for the Town of Murfreesboro and we can really appreciate that,” Mitchell said. “We love you for your efforts and they will never be forgotten. Thank you sincerely. Herford County will miss you and I want to let you know that Murfreesboro will always be your home.”

Odum thanked everyone for coming out and said, “I couldn’t have done this without the support of the Council and the Recreation Commission Board.

“Through this whole thing was my friend and ally, the honorable mayor,” she said. “He thought we needed to get something together. He always supported our ideas.

“I’ve left the council with a list of things to do, only 10 or 12. I expect to come back from time to time to see if these things are getting done,” she joked.

She also credited Vidant Roanoke-Chowan Hospital with helping the town’s recreation efforts with a $10,000 grant each year from its Community Health Grant. She also praised the county commissioners for providing $10,000 two years ago for the town’s first day camp celebration.

After acknowledging the grant funding and other assistance, Odum addressed the nearly70 people in attendance for the dedication.

“This is your park. The improvements we made are for you,” Odum said. “This is for the families.”

She said she didn’t want people drinking alcoholic beverages or smoking in the park. She wants it to be a safe place for kids to come to play and for families to gather in safety for a nice day out.

She suggested that people viewing others in park doing illegal or inappropriate behavior to let someone know.

“We don’t want drinking and drugs, or any guns or weapons of any kind here, permitted or otherwise. This is your park,” Odum exclaimed.

“We want you to treat it like your park,” she said. “You’re going to have your children out here and you don’t want people walking around with brown bags and smoking and those kinds of things. This is for your families.”

Odum concluded, “Thanks again for coming out. I really appreciate it. I really do, and I’m not going to cry.”

The mayor then officially declared that through the blessings of the Town Council that the pavilion named after Councilwoman Gloria Odum was officially open for public use.

The audience then joined in on a healthy meal and lots of laughter and conversation in a beautiful park on an equally beautiful day.

Even some small children who just came to the park to play joined in the celebration.