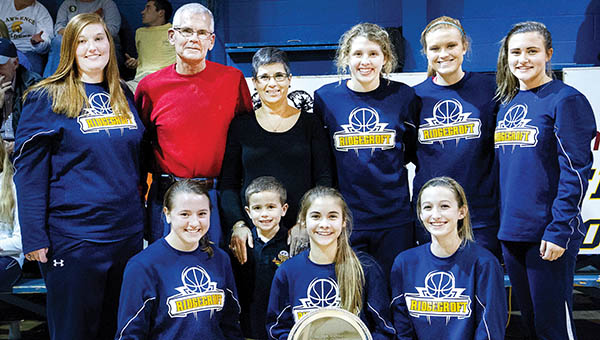 AHOSKIE – When the going gets tough, the tough get going.

Locked in an unexpected tight battle against Pungo Christian Academy, a team they had handily defeated two weeks ago, the Ridgecroft Lady Rams turned up the wick on their defensive pressure, setting up a key offensive outburst early in the fourth quarter that turned a narrow one-point lead into a double-digit cushion en route to a 50-37 win in Friday night’s varsity girl’s championship game of the 10th annual Lt. Nick Brantley Scholarship Basketball Tournament.

It marked the second straight year that the Lady Rams have claimed the tournament’s first place hardware and marked the third year in a row in reaching the title game. They were runner-up in the 2013 event. 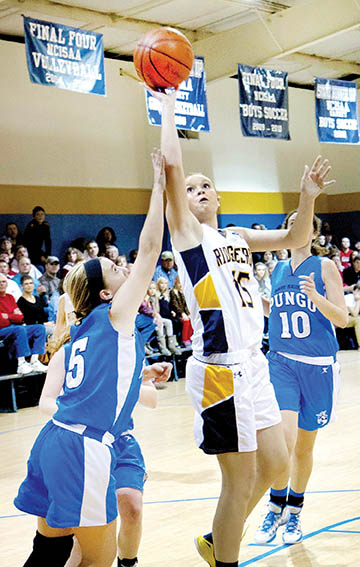 Brantley Tournament MVP Ruthie Daniels (#15) glides to the basket for two of her team-high 18 points on Friday that paced Ridgecroft School to a 50-37 win in the girls’ title game.

“It wasn’t our best game statistically, but this group of girls just know what it takes to win,” said Lady Rams head coach Susan Oliver after watching her team extend their win streak to seven games to start the 2015-16 season.

“I thought we were too impatient in the early stages of the game and rushed way too many shots. Once we settled down and got into a groove we began to play better,” Oliver added.

Clinging to a 35-34 lead after Pungo’s top scorer Taylor Mann (a game-high 20 points) converted an old-fashioned three-point play less than one minute into the fourth quarter, the Lady Rams got busy.

Ruthie Daniels, later named as the tournament MVP on the heels of an 18-point performance in the title game, got it started by burying a soft jumper from the baseline. Following a Pungo misfire, Cameron Basnight (an All-Tournament selection) grabbed the rebound and went coast-to-coast for a lay-up. Daniels then added an easy bucket off a steal and feed from All-Tournament performer Emily Grace.

By the time Daniels bombed in a three-pointer, set up by a Basnight steal on the defensive end, Ridgecroft had opened up a 10-point lead (44-34) with 4:20 remaining.

Pungo could only get to within eight (45-37) as Basnight and Reagan King were able to connect on the front end of a pair of 1+1 foul shots over the final 33 seconds to deny the Lady Raiders a comeback.

“It was just a case of being patient and wearing Pungo down,” Oliver said. “When they (Pungo) abandoned their 1-3-1 (defense) and went to man-to-man, we were able to do what we do the best, spread the court and use our speed and good, crisp passing to take the ball to the basket. This team has great chemistry, they know where they’re supposed to be on the court in a designed play and how to rotate the ball to the player with an open look at the basket.”

A turnover fest by both clubs (a combined 22 miscues) as well as cold shooting (a combined 3-of-25 from the field) resulted in Ridgecroft holding a 6-5 lead after one period of play.

The Lady Rams struggled against a 1-3-1 zone defense employed by Pungo. That defense featured Mann up top and her 6’-1” frame disrupted Ridgecoft’s effort to get their offense in gear.

Meanwhile, Mann was also making her presence felt offensively as back-to-back baskets by the senior followed by a hoop from teammate Rebecca Hodges staked the Lady Raiders to a 13-9 lead at the midway point of the second quarter.

Again, with its backs to the wall, Ridgecroft answered. A basket each from Grace and Daniels over a span of 68 seconds lit a fire under the Lady Rams. By the time Daniels buried a long-range trey followed by Sydney Lane’s deuce off her offensive rebound, Ridgecroft owned a 18-14 lead en route to a 20-17 halftime advantage.

That lead swelled to 24-17 just over 30 seconds into the second half thanks to consecutive baskets by King and Basnight. However, the Lady Rams went cold from the field, connecting on just one of their next nine shots.

That kicked the door open for a Pungo rally and the Lady Raiders took advantage, draining six straight shots (four by Mann) and grabbed a 29-26 lead with 3:14 left in the period. That lead grew to four (31-27) after a hoop from Emily Spencer.

Ridgecroft rallied over the final 70 seconds of the quarter as Basnight connected on back-to-back baskets, the last one off a nifty assist from MacKenzie Brown, followed by a steal and lay-up from Daniels that gave the Lady Rams a 33-31 edge going into the final eight minutes of action.

The Lady Rams face three opponents this week: tonight (Tuesday) at Albemarle; Wednesday at home vs. Halifax; and on the road Friday at Northeast.