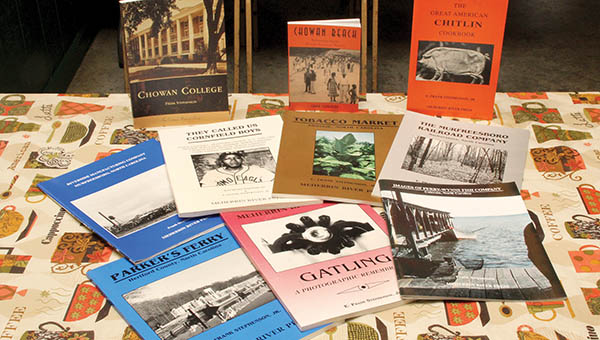 During the past few decades, E. Frank Stephenson Jr. of Murfreesboro has authored numerous books detailing the rural way of life and the rich history of the Roanoke-Chowan area. | Photo by Cal Bryant

MURFREESBORO – He has authored in excess of 25 books on the life and legacy of the Roanoke-Chowan area.

He has stood at the forefront of ensuring the preservation of history within the same region.

For those efforts, E. Frank Stephenson Jr. of Murfreesboro has been deservingly honored by his peers statewide through the North Carolina Literary and Historical Association.

At a recent meeting of the Association in Raleigh, Stephenson was presented with the 2015 Christopher Crittenden Memorial Award, presented annually since 1970 to a person or organization for “adjudged performance in the advancement of North Carolina history.” 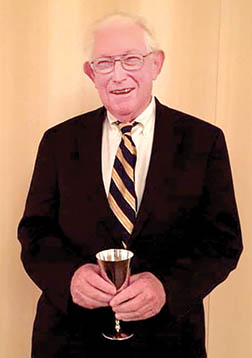 E. Frank Stephenson Jr. was the recent recipient of the 2015 Christopher Crittenden Memorial Award for his tireless efforts to preserve the history and culture of northeastern North Carolina. | Contributed Photo

The award was established by the Association in 1969 in memory of C. Christopher Crittenden, longtime secretary-treasurer of the association and director of the State Department of Archives and History from 1935 to 1968. The Association annually recognizes a person, organization, institution, or corporate body engaged in the study, writing, teaching, publication, preservation, restoration, or dissemination of knowledge pertaining to North Carolina history.

“I was very surprised; I didn’t see this coming,” said a humbled Stephenson when asked about the distinguished honor bestowed upon the 70-plus year-old Hertford County native. “I never imagined an award of this stature ever coming my way. I am deeply appreciative and extremely grateful of the committee members that made this decision.

“I personally knew half the people on the list that have won this award, to include the late Mr. Crittentden. I consider all of them as icons in the business of preserving the rich history of our state,” Stephenson added.

Stephenson admitted that he believes his full body of work over the years – which has included the local history of herring fishing, Negro League baseball, moonshine manufacturing; the art of cooking and the equally refined taste of eating chitlins, basket making, farming, the inventive Gatling family, and the Ahoskie Tobacco Market – played a role in his recognition by the Association.

“Awards such as this doesn’t occur to me when I’m working. I just started out trying to save a few old homes in Murfreesboro and it ballooned from there in researching and writing books about our local history,” Stephenson noted. “I’m just grateful and happy to see our history being preserved. I’m grateful for my many colleagues over the years.”

Stephenson continued, “I’ve captured moments in time that people here in our area can relate to. I enjoy things I grew up with. I remember the stories passed down to me. It’s sad when you lose that history…I’ve done my best as a country boy to preserve that history.

“I’m just happy to still get out and work everyday. I’m just a journeyman….still learning about life. I simply love my community, and the people here,” he concluded.

Barbara Mulder, a longtime colleague of Stephenson, and his daughter, Caroline, accompanied him to Raleigh and witnessed the bestowment of the Crittenden Award.

Stephenson’s boundless commitment to preserving the history of the rural South is remarkable. He played an important role in restoring Murfreesboro’s Historic District residences and buildings that date back to the 1700s. In addition, he has authored 27 books on local and regional history and culture. Indeed, he has preserved just the sort of stories that historians have often ignored because the lives they describe seem so insignificant. Consequently, his documentation of northeastern North Carolina history and culture in the twentieth century will be invaluable for future historians.

In October of last year, Stephenson witnessed the end of another of his numerous historic preservation efforts when a North Carolina State Historical Marker was unveiled on Main Street in downtown Murfreesboro that honored the late F. Roy Johnson. As one of Stephenson’s childhood heroes, Johnson was also a history buff and published – as a writer, photographer, editor and printer – numerous articles and books through his two businesses – the Roanoke-Chowan Daily News and Johnson Publishing Company. Both businesses, which combined to be in operation for 50 years, were located in a tiny shop in Murfreesboro.

Born in Como in 1940, Stephenson grew up on a farm where tobacco, peanuts, and cotton provided income for the family. His father was a farmer and, among other jobs, a house builder and Hertford County Deputy Sheriff.

After graduating in 1958 from Murfreesboro High School, Stephenson worked two and one-half years at the paper mill in nearby Franklin, VA, saving his money to attend college. That quest led him to Chowan College (now Chowan University), graduating with an AA degree in Liberal Arts in 1962. From there it was on to Raleigh where he earned a BS degree in Industrial Management in 1965 and a Masters in Counseling in 1968, both at NC State University. He also completed additional post-graduate studies at the University of Virginia and the University of North Carolina at Chapel Hill.

Stephenson’s first job out of college was serving as a guidance counselor at Southampton County High School in Courtland, VA.

In 1966, Stephenson returned to his true love – Chowan College where he worked as Director of Admissions for 10 years. Stephenson then switched hats moving over to lead a new program at Chowan – Upward Bound, and remains there to this day.

For more information on Stephenson’s books, contact him at Meherrin River Press at 252-398-3554.