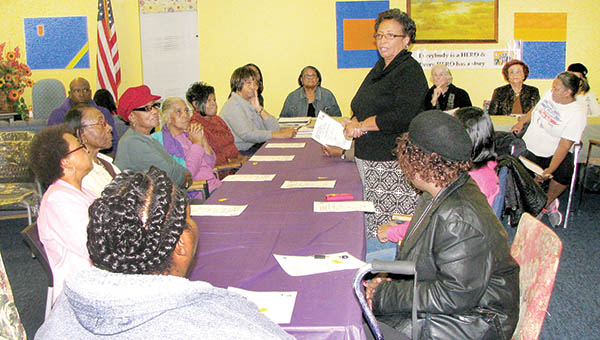 Cancer survivors and caregivers shared their triumphant stories on Tuesday evening at the J.W. Faison Senior Center where Northampton County Relay for Life officials saluted their efforts as well as kicking off the 2016 event. | Staff Photos by Keith Hoggard

JACKSON – Cancer survivors and caregivers were honored Tuesday night at the J.W. Faison Senior Center by Relay for Life of Northampton County.

The meeting was a planning session leading up to next spring’s Relay, which will also be a five-year celebration for Northampton’s event, which raises funds for cancer research by the American Cancer Society.

Northampton has met its goals every year and in this rural, sparsely populated county, has raised over $200,000 in the battle against cancer in just four years.

Chairperson Marla Jerman said Northampton’s Relay for Life has been getting better every year and praised the large assemblage of guests gathered to support the many survivors and caregivers in the county. 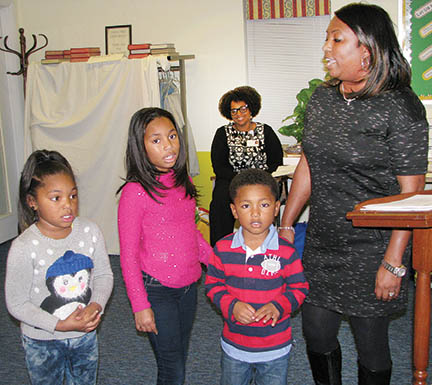 From left: Siblings Mauri Jerman, Gizelle Jerman, and Jaylin Jerman are led in song by their mother, Sheena Jerman, as they provided entertainment and inspiration at Tuesday’s Relay for Life gathering in Jackson.

“It is a blessing to embrace and love people,” Jerman said. “We stand in honor of those who have passed and to honor the survivors and caregivers.”

Tuesday’s theme for the evening was, “Everybody is a hero and every hero has a story.”

Each survivor was asked to stand and relate the type of cancer they had and how long they had been survivors.

Some had been cancer-free for decades, while many others were fairly recent survivors.

Terry Richardson, for example, has been a survivor one year and three months after a bout with breast cancer.

“I’m getting another look at life,” she said. “I’m very appreciative of the overwhelming support I’ve received from family and friends.”

After the survivors were honored, the caregivers were invited to stand and tell who they helped get through their difficult diagnoses.

Jerman named several people she has served as caregiver, reminding the audience how difficult and rewarding the experience can be.

“It takes a lot of work and patience,” she said.

Jerman said the group will once again do a purple ribbon campaign like it did in 2015, which won national accolades for raising awareness for Relay for Life. 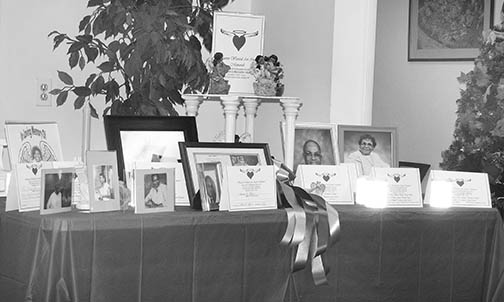 This table was used as a display to memorialize cancer victims at Tuesday’s Northampton County Relay for Life event held in Jackson.

But this year there will be difference. The color purple is for survivors and yellow represents caregivers. Instead of purely purple ribbons like last year, the 2016 ribbons will be purple with a heart of yellow.

The 2016 campaign will be called, “Toon Out Cancer & Let’s Finish the Fight.” Everyone participating will be asked to look like their favorite cartoon character.

This Relay for Life will also emphasize getting children more involved in the fight. A Kids’ Walk for children ages 12 and under will be conducted.

“Let them take the message out,” Jerman said. “One day I’m going to go out of here. I need somebody to carry the message of hope on.”

For Jerman, Relay for Life represents far more than raising funds to fight cancer. It is a message of hope.

More people are surviving the fight and new discoveries are helping people win the fight. Cancer is survivable and organizations like this are giving hope.

First Baptist Church of Severn won the honor of bringing the most survivors to Tuesday night’s meeting.

The business of organization for the Spring Relay for Life then kicked into high gear with planning for new events and fundraising ideas.

Jerman said the deadline for sponsorships to get all paperwork in is April 1, 2016.

If you want sponsor a team or become involved with Relay for Life of Northampton County, call Marla Jerman at 252-578-3387.