WINDSOR – Bertie High School principal Rickey Eley has tendered his resignation to Bertie County Schools in the wake of public revelations surrounding his involvement in an out-of-state vehicle accident that occurred last month.

The revelations came to light, according to media reports, after Eley had a court appearance scheduled on Thursday in Petersburg, VA on charges of leaving the scene of an accident, a felony, and giving false statements to police. The latter charge is a misdemeanor. 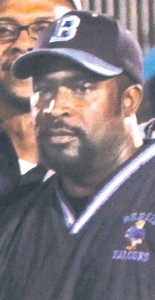 Rickey Eley has served since 2011 as Bertie High School Principal.

According to a police report and court records, the accident, with injuries, occurred Oct. 17 on a Petersburg, Virginia street. A police report says the other vehicle was driven by a teenager, and there was approximately $5,000 in damages to each vehicle.

According to the report, Eley was with a passenger traveling south on South Crater Road in Petersburg when he collided with a vehicle driven by a teen traveling west on East Washington Street. Eley’s vehicle struck the car in the intersection, the report said.

Eley and his passenger allegedly switched seats, according to witness statements. There are conflicting statements as to which vehicle had the green light.

Eley reportedly left the scene, but was later stopped by police in Suffolk, VA, Oct. 18, the day after the wreck. He was charged and released on his own recognizance.

Eley has been employed with Bertie County Schools for 20 years beginning as a substitute drafting teacher and assistant coach before working his way into administration; and he has been principal at the high school for the past four years.  He will be on leave, according to the school system, until Nov. 30 when his resignation will take effect.

“The district is disappointed in the charges against Mr. Eley, former principal of Bertie High School,” said Elaine White, Superintendent of Bertie County Schools in a statement released to the media. “He believes he has done the right thing by stepping down as principal. He is taking full responsibility for his actions and their consequences, and this sends the right message to the students and the community we serve.”

White’s statement went on to say they have already begun the process of selecting an interim principal for the high school.

WITN-TV reports Eley’s attorney, Todd Stone of the Richmond, VA-based firm of Stone, Cardwell, and Dinkin, said in a statement that Eley called the police when the wreck happened and remained at the scene.

Stone added, via the statement, “This case is a good example of why people are presumed innocent until proven guilty. I expect the charge to be dismissed after a judge hears the evidence.”

Eley’s court case has been continued to February 9.