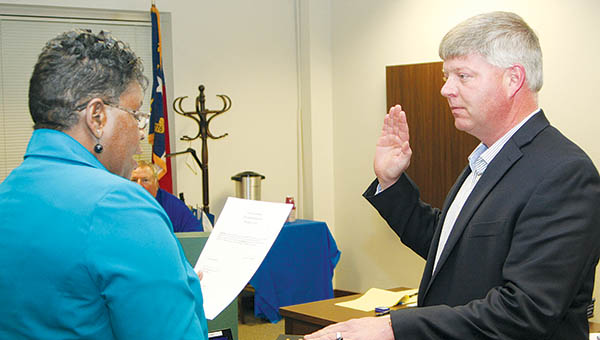 Bertie County Clerk of Superior Court Vasti James (left) administers the oath of office to County Tax Administrator Jodie Rhea (right) during the Nov. 2 meeting of the county’s Board of Commissioners in Windsor. Rhea will serve another term of four years. | Staff Photo by Gene Motley

WINDSOR – Usually the sight of the tax man produces reactions from agitation to terror. But that was not the case here on Monday night.

Rhea began his career with the county tax office as Deputy Tax Collector in 2001 and was appointed Administrator in November 2013, and has served in the role for the past two years.

North Carolina law requires Administrators to attend and pass courses, in addition to passing a state exam, for full certification within two years of their appointment. Rhea completed his certification requirements in October.

Bertie is one of several counties in the state where the Tax Administrator holds the dual role of tax collector and assessor; whereas in some counties two persons perform those duties.

“When Jodie came before the Board two years ago he assured us he would go forward and he would be successful, and he has lived up to that requirement,” said Commissioners’ chairman Ronald D. “Ron” Wesson, “and we all knew that he would.”

After the administration of the oath of office, Rhea addressed the Commissioners, even with a sense of humor.

“I appreciate this opportunity you’ve given me,” Rhea stated. “I’ve done what I was supposed to do. We’re going to continue to move forward and try to keep our tax rate low, but our collection rate as high as possible.”

Commissioner John Trent summed up Rhea before his fellow Commissioners.

“You’re kind, and you treat people fairly, and I’ve heard that quite a lot from people around the county,” Trent said.

Because the position is an appointment by the Commissioners, it must become a part of the official record. Wesson made a motion to appoint Rhea to his post for a four-year term.

The motion was seconded by Commissioner Stewart White, and it was passed by the Board unanimously.