After a series of seven straight losses to Elizabeth City State in football, Chowan University struck for a “historic” 24-20 victory over the visiting Vikings Saturday afternoon here at Garrison Stadium.

The win was the fourth first-time win over an opponent this season for Chowan having earlier turned back Delaware State, St. Augustine’s, Winston-Salem State, and now ECSU.

The Hawks improve to 5-3 overall with the victory and advance to 3-2 against CIAA opponents. The Vikings move to 4-3 on the year and drop to 2-3 in league play. Chowan’s win over Elizabeth City State was also the Hawks’ first divisional win of the season. 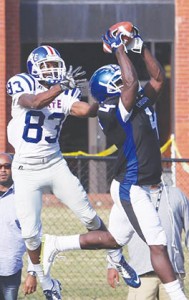 Chowan’s Vincente Stafford (#4) robs Elizabeth City State’s Johnnie Nunn of a catch with one of his two interceptions late in Saturday’s CIAA game at Garrison Stadium. Stafford and the Hawks defeated the Vikings 24-20 for the first time in school history and claimed their fifth win of the year. | Dynamic Photo – William Anthony

After the Vikings pulled even at 17-17 early in the fourth quarter and then took the lead, Chowan got the game winner on one of their longest pass plays of the year. The Hawks then came up with a pair of late ECSU turnovers to seal the deal and end eight years of frustration at the hands of the Vikes.

“Regardless of whether it’s the first time or not we beat a quality opponent,” said a smiling, but humble, coach Tim Place after the game. “It’s a big win for the school, a big win for the program, and now we just have to keep it moving.”

After Elizabeth City State got on the board first in the contest using a 37 yard field goal by Jeff Flores, Chowan then scored 14 unanswered points. First they answered the Viking field goal with a four play, 75 yard drive capped by an 18 yard touchdown scamper by Tyree Lee on what would be another big rushing day for him. Nick Hahula’s point after attempt was successful, resulting in a 7-3 lead for the Hawks with 7:38 left in the first quarter.

“We haven’t played at home a lot this year so my school doesn’t get to see me play much,” said a grinning Lee after the game, as he nodded toward his family who’d made the trip down from Hampton, VA to see his game. “But there’s still a lot of work to be done.”

With less than two minutes remaining before the start of the second quarter, Jordan Watkins – the Florida freshman making his first-ever collegiate start – connected with Damian Ellis on a 33 yard touchdown strike down the sideline helping extend Chowan’s advantage to 14-3 and the game was still in the first quarter.

Elizabeth City State finally got their first six pointer as quarterback Daquan Neal zipped into the end zone on a two-yard touchdown run eight-and-a-half minutes before halftime that capped a seven play, 43-yard drive for the Vikings and cut the deficit to 14-10.

Hahula took matters into his own hands – or on the toes of his foot – when he booted through a 39 yard field goal with five-and-a-half left in the first half to push Chowan ahead 17-10. The Hawks’ defense held the Vikings off the scoreboard for the remainder of the period and made that score hold up through halftime.

The third quarter proved to be a stalemate for 14-and-a-half minutes, but with 30 ticks remaining in the quarter and Chowan driving, ECSU’s Khayree Lundy intercepted Watkins’ at the Vikings’ 15 yard line. Neal then connected with former Hertford County High receiver Montario Hunter on a 48 yard pass to set up Ra’Sheed Rushing’s four yard touchdown run that knotted the score at 17-17.

Chowan still couldn’t sustain any momentum and midway through the fourth quarter another Flores field goal, this one from 38 yards out, returned the advantage to the Vikings.

Facing another come-from-behind effort, Chowan patiently put together a seven play, 88 yard drive. Then, on third-and-eight from near midfield, Watkins found Lee out of the backfield and he simply outraced the Viking defense 45 yards to the end zone. Hahula’s point after attempt was good, leaving the Vikings trailing 24-20 with 6:12 left to play.

The Hawks and Vikings exchanged drives as the clock wound down in the fourth quarter. All three times ECSU had the ball resulted in turnovers. Two interceptions by Vincente Stafford were sandwiched in between Kemaree Alcorn forcing a Viking fumble.

“I just wanted to make something happen and stay humble, but it’s a mind-set; you have to be hungry for it,” said Alcorn afterward. “We just tried to get after them together, and now we can celebrate this win together.”

With 34 seconds left in the game and the Vikings driving at midfield Stafford intercepted Neal a second time at the 35 yard line and Chowan merely had to run out the clock.

Lee paced Chowan with 31 carries for 173 yards and a touchdown He also had 58 yards receiving for another score. Watkins completed 12-19 passes for 187 yards and a pair of scores. Kaine Lombard and Anthony Elliott hauled in four passes each on the afternoon for 50 and 38 receiving yards, respectively. Ellis tallied 41 receiving yards and caught the other touchdown pass through the air.

Darren Wilson led the Chowan defense with 13 tackles (seven solo) followed by Stephen Williams with 10. Demetrius Newberry had two pass breakups with one for Roderick Lindsey.

The Hawks are back in action Saturday, Oct. 31 with a Homecoming/Halloween date against defending CIAA champ, Virginia State University. The game will also serve as Senior Day and kick-off is slated for 3 p.m.

Home, away, and open