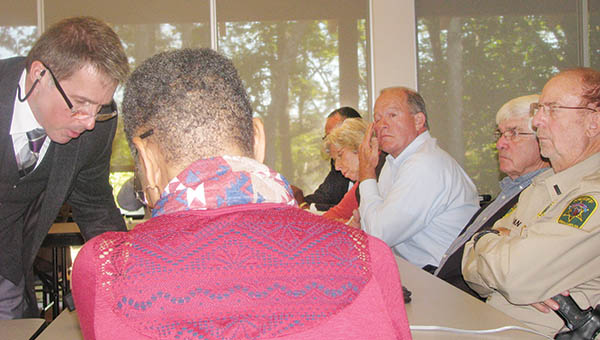 GATESVILLE – The Gates County Board of Education presented the Board of County Commissioners some graphic reasons as to why a new Central Middle School needs to be constructed when the two elected bodies sat down here Tuesday during a joint meeting at Merchants Millpond State Park.

Perry has been part of many school construction projects and has a great deal of knowledge about the state of schools, whether a school is fixable, and how to assess value, said Dr. Williams.

Perry presented a slide show detailing the problems Central Middle School now has. He concluded that the many problems makes it more expensive to fix than to build a new school.

His opinion was supported after the slide show by Dr. Ben Matthews, the North Carolina Department of Public Instruction’s expert on school construction, in a conference call from Raleigh.

Perry pointed out that there are several health issues affecting the school, such as asbestos, lead in the paint and solder, mold in the windows and behind the walls, no hot water is some bathrooms, inadequate air exchange, and unattached tile. 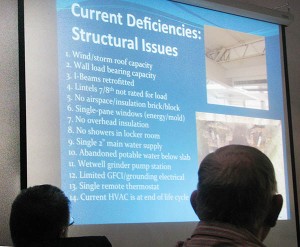 He said several classrooms in the school are no longer used due to mold and a lack of climate control and that the problems can’t simply be repaired.

The school needs a new roof, but even a new roof is inadequate because there is not even load support. The HVAC units are on the roof. Because of the existing weight, Perry said there is risk of roof collapse with a strong wind or heavy snowfall.

Perry also said there is a risk of wall collapse.

To protect the students and staff, Perry said, the camera and fire alarm systems are antiquated and need an upgrade.

He also said there is no protection for the satellite classrooms and that even the main buildings have too many doors to be secure. Instead of the 18 now used, there should only be two or three.

There is also no safety glass, limited panic bars, and no automated lockdown system.

Perry summed up some the most glaring problems, saying roof capacity needed to be improved, load bearing capacity of walls needed work, larger lintels needed, and an I-beam needed retrofitting.

For greater energy efficiency, windows should be improved, insulation upgraded, and the current HVAC system is at its end of life and is in need of replacement.

He also said the water and sewage systems are inadequate for the school’s needs. This results in no water for the showers and limited sewage needs.

After 45-minute litany of problems, Perry told the commissioners that Central Middle needed to be rebuilt because there numerable irresolvable problems, negative impacts on the health of students and staff, the building is unsafe, renovation is not an option, and to prevent potential liability.

In addition to all the issues cited, Perry said renovating the old school would be significantly more expensive that building a new one.

The commissioners expressed concern about the costs and whether they had enough debt service to fund the issue.

They were also concerned about the site of the new school – whether it would be where Central now is or somewhere else.

They are concerned about the future route of 158.

Commissioner Henry Jordan gave the school board two suggestged sites, one 30 acres and the other 26 acres, that could be home to a new school.

Perry said a site of those sizes would be ideal because the six acres Central now occupies poses problems.

The commissioners and BOE want questions and concerns from the public and will hold a future joint meeting on this issue before a decision is made.

The School Board will do a feasibility study and look at funding options prior to that meeting.