MURFREESBORO – What began as an update article on the Meherrin River Front Project has taken a transformation. It tells the story of a man, his bucket list and his vision for how he wants the future to pay homage to the past.

When it comes to Percy Bunch, many words could be put down on paper concerning his life in Murfreesboro and Hertford County. Part of that life is his vision for the newly acquired “Kings Landing” parcel down on the Meherrin River, the portion past the cemetery to where it ends at the lost bridge. 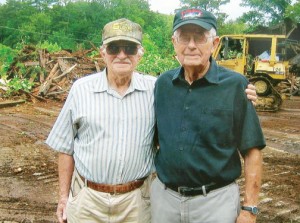 Percy Bunch (right) stands with John Glover in front of one piece of equipment clearing the way for the rebirth of Murfree Landing. Photo by Tim Flanagan

One recent hot and humid afternoon, Bunch shared a rough draft on paper of the project and a history lesson of this section of river and why he wants it to see full circle fruition.

When Bunch moved from Edenton to Murfreesboro in 1938, the road to the “lost wooden bridge” was US 258. In 1950 when the new bridge spanning the Meherrin River opened, the old bridge became obsolete.

Obsolete is such an inescapable feeling…to be forgotten or discarded, which happens to bridges and happens to people. But does it really? Not if you live a life of love and dedication, then you and the bridge will live fondly in the memories and captured print and photos of those that know.

That is the life Bunch created for himself. His vision, or legacy you could say, pays homage to the past while paving the way for a wonderful future!

Standing next to Bunch and gazing out at the Meherrin River, we had to envision the clearing, the debris removal of what was the old Smith Douglas Fertilizer Warehouse and the beautification as it will be at its projected completion in 2018. Back in the day the boats and barges would come up river to bring oil, gasoline and supplies to the factory. Young women who were students of Chowan College were also transported by boat on that beautiful river. Bunch himself has sailed from that very spot on a big ship all the way to Florida.

Of course remembering back to the days of Murfreesboro’s birth, it was the same river that merchants would travel in and out of trading goods. At that time it was fondly known as “Kings Landing.” It was the furthest inland that the big ships could sail.

However, before it was named “Kings Landing” it was called Murfree Landing and Bunch said he would like nothing more than to see the project at completion dedicated as Murfree Landing once again.

There is a new plan for this beautiful and useful parcel of land. As we stood together and watched, two fishermen in a canoe drift into our line of vision, and this sparked the conversation in a different direction. Enough of the over turned trees, the giant piles of left over factory and the scattered mess of a project underway. Spearheaded by the generous donation of construction and excavating equipment from Percy’s, and the town’s friend John Glover of Glover Construction

Walking over to a vast concrete slab that could easily be fifty yards wide and two hundred yards long, Bunch explained how lucky they were to have been able to salvage the factory’s floor. Once cleaned up and repaired this will make the perfect place for a pavilion and events. There is ample room for parking, and just a beautiful natural North Carolina river setting as a back drop to any activities or events to be held there.

So between the generosity of those involved – to include Bunch and Glover, and the grants able to be obtained, Murfreesboro and Hertford County will be able to rediscover this waterside gem that has been for so long hidden or inaccessible!

Of course several things have to fall into place for this all to happen, but it is underway. Imagine yourself standing on the high banks of the Meherrin looking down into the gently flowing river, picture a brand new eighty foot by twenty foot recreational pier, cement walkways for people to fish or walk along the high banks and pretend to feel the excitement as boaters, fishermen, kayakers and nature lovers flock to the river and the town to enjoy the treasure of its natural beauty. Dream of concerts and festivals finally being able to be held on the river that built this town.

That’s what Percy Bunch sees….and hopefully that vision will be soon shared for all to enjoy.