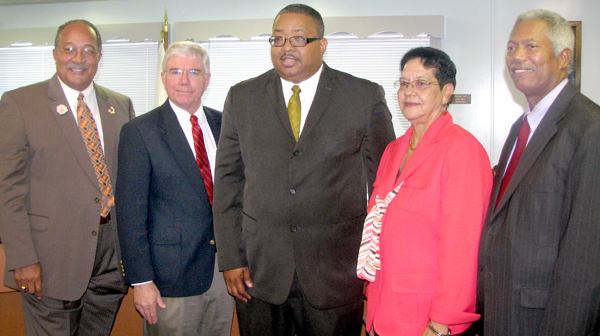 During a special meeting Thursday afternoon, the Board of Education voted unanimously to appoint Wright the new superintendent.

He will be on the job full time on December 1, but said he will be stopping by to keep abreast until then as he and his wife makes the transition from McCormick County, SC to Hertford County.

Wright thanked the board for its confidence in him and said, “I plan to be here for the long haul.”

He said he came to this area to return home, close to Nash County where his extended family still lives.

“I am uniquely qualified to take us to the next level,” Wright said. “We’re going to roll our sleeves up and work together to improve our school district for our children.”

He told the audience of mostly educators, “I like to get out into the schools” where he can speak directly to principals, teachers, staff, students, and parents about what works and what doesn’t to make each school more effective for teaching and learning.

He said his leadership style is the “Triple A” – Ask, Assess, and Analyze – working with all interested parties in and out of the school district.

“I have a child-centered focus,” said Wright, “and will be going out into the community, churches, and local businesses to keep everyone informed about what we’re doing and to find out what they’re thinking.”

Board Chairwoman Sheila Porter presented a brief biographical sketch of Wright. She said that he comes from the Swift Creek community in the northern part of Nash County.

She said, “Dr. Wright is a 1983 graduate of Northern Nash High School in Rocky Mount and, at the time of his graduation, was the youngest graduate in the school’s history at 16 years of age.”

He was a broadcaster and manufacturing manager before becoming a teacher at Edwards Junior High School in Rocky Mount.

He later became principal of Western Harnett High School in Lillington before being named assistant superintendent for auxiliary services for Harnett County Schools in 2011.

He was unanimously named superintendent for McCormick County, SC in 2013.

He is married to Mary Barnes Wright. They both attended Northern Nash High School at the same time, though they didn’t date in high school.

They have been married for 25 years and have two sons: William III (Trey) who is an educator in Greenwood, SC; and Mariam “Deonte” who will graduate from Piedmont Technical College in Greenwood in December 2015.

Mrs. Wright is a medical records coder for Wake Medical Center, work she can do from home.

Wright is also minister of music at Union Hill Baptist Church in Nashville, NC and is an ordained deacon.

He said after the School Board meeting that his desire for Hertford County is to bring excitement back to county for education.

“I’m doer,” he said. “I will have a hands-on administration and stay involved in the community.”

Wright said he is a product of a school district very similar to Hertford County and will work very hard to eliminate the district’s significant reading gaps, which are shared by many school districts in this region.