Local farmers, especially those with cotton remaining in the field, are being encouraged by agricultural officials to exercise patience before rushing to harvest.

After two solid weeks of wet weather, the sun came out Tuesday, much to the delight of Roanoke-Chowan area farmers. However, that extended period of rain took its toll at a very important stage of the growing season – harvest time.

“All this rain came at the worse possible moment for our farmers as they were right at the time where they were in the beginning stages of getting in their crops,” said Richard Rhodes, Director of the Bertie County office of North Carolina Cooperative Extension (NCCE).

Rhodes said the majority of cotton in Bertie County was still in the field and was suffering from the seed sprouting inside the boll. 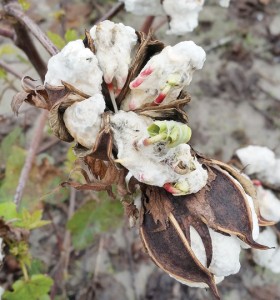 The recent extended period of wet weather across the Roanoke-Chowan area has led to seed sprouting inside cotton lint in many fields. Photo by Richard Rhodes

“We need some bright, sunny weather to dry out the cotton and turn that lint back into a fluffy white color,” Rhodes stressed.

“One of our bigger concerns is that the weather stayed wet for so long that the lint cotton seed has starting sprouting,” Ellison said. “I can’t stress enough to our farmers that they need to be patient, allowing those seeds, which hold a lot of moisture, to die and then they can harvest cotton lint that’s fairly dry.”

Ellison estimates that process will take a week to a week and a half if the weather cooperates.

“Don’t get in the field too soon,” Ellison warned cotton farmers. “What you do not want to do at this critical stage is to put moist cotton in a field bale; the heat builds up and causes deterioration.”

Ellison cited a report prepared by W. Stanley Anthony of the US Cotton Ginning Lab in Stoneville, Mississippi that came on the heels of a similar stretch of wet weather. In that report, Anthony stressed that cotton should only be harvested after at least seven-to-10 additional days of sun exposure than normally used to allow the germinated cottonseed to die out and dry out. He noted that if cotton is harvested too quickly following an extended period of rain, seed cotton moisture will be excessive (over 12%) and the seed cotton cannot be stored either in trailers or (bale) modules for more than 24 hours. That’s due to the fact that the germinated cottonseed will remain at a higher moisture content than normal cottonseed.

Anthony recommended that the temperature of a bale module needs to be monitored every 12 hours for at least six days. If the temperature rises more than 20 degrees or reaches 120 degrees, gin immediately.

Ellison said some farmers in Northampton had gotten a head start at harvesting cotton prior to the wet weather setting in.

“Based on the strong yields they were experiencing, we were very optimistic that a two bale per acre crop would be fairly close to accurate. Now we don’t know….it’s a wait and see thing now,” Ellison said of the 39,000 acres of cotton grown this year in Northampton.

“Our main problem is standing water in middle of fields; crops are compromised due to all rain we’ve had over the past few weeks,” he said. “It’s also impacting our vegetable farmers. We’re seeing an increase in plant disease as well as an increase in insects due to moisture and high humidity.

“There is some concern with the peanuts that are still in the ground waiting to be dug,” Banna added.

Peanuts are also a concern in Bertie, where the majority of the 7,600 acres in the county have yet to be harvested according to Rhodes.

“We’re still early in assessing the impact on our peanut crop here, but there are some cases where there is a deterioration of the pod and discoloration of the nut of those peanuts that were dug and have been lying out during all that rain we had,” Rhodes said. “Another thing is the pegs that hold the shell to the vine is deteriorating. That means the shell will more readily fall off the vine during harvest, which impacts the yield.”

Rhodes added that unharvested tobacco in Bertie is suffering from “brown spot” due to the recent round of soggy weather, which will also impact yield. He said sweet potato farmers in the county are attempting to harvest as quickly as possible in an effort to prevent that crop from rotting in the super-soaked soil.

“Our farmers are resilient….the ones I’ve talked to are taking it all in stride, saying they’ll do all they can to salvage what’s left,” Rhodes said.

As for the peanut farmers in Northampton County, where nearly 3,800 acres is planted this year, Ellison said it depends on the variety of the nut that was placed in the ground back in the spring.

“The main variety we grow here holds pretty good in the field, but there is some concern over other varieties that are notorious for sprouting in the hull when they get too wet. We’re just waiting for it to dry out a bit so we can better assess the impact the weather had on our peanuts,” Ellison said.

Ellison added that he not evaluated soybeans as of yet, but was concerned about seed drop due to the wet weather.

Both Ellison and Rhodes also addressed a situation with the grain sorghum seeds sprouting in their respective counties, similar to what’s occurring with the cotton seed. They said the sorghum seeds need time to dry out prior to harvest.

In Gates County, NCCE Agricultural Agent Paul Smith is keeping his fingers crossed for a string of good weather.

“What we are in dire need of right now is about six weeks of good weather; lots of sunshine and a steady breeze to dry things out,” Smith stated. “Our farmers will note some losses this year as the recent rainy weather will have an impact on overall yield. If the weather holds, the losses will not be a total disaster.”

However, as Smith observed, another prolonged period of rain will make a big impact on peanuts.

“We’re looking at a 30-to-40 percent loss there if the weather pattern returns to persistent rain,” he said. “As it stands right now, our farmers who dug their peanuts over two weeks ago and they’ve been lying there all this time on wet ground, they will lose yield because the pod (shell) will fall off the vine.”

As far as cotton in Gates County, Smith said farmers are dealing with two situations – boll rot from those bolls that had just begun to crack open as the most recent rainfall event was beginning; and seed sprout in those bolls already opened.

“I think we’re looking at more grade loss than yield loss in cotton; the quality will be down,” Smith noted.

While local farmers and agriculture officials take a “wait-and-see” approach to gauge the impact the recent weather had on their crops, their brethren to the south already know their fate.

On Tuesday, North Carolina Governor Pat McCrory toured two of the state’s hardest hit counties – Bladen and Brunswick – where 18 inches of rain fell. Farmers there stand to lose as much as 75 percent of the value of their crops, according to information provided by the Governor’s Office.