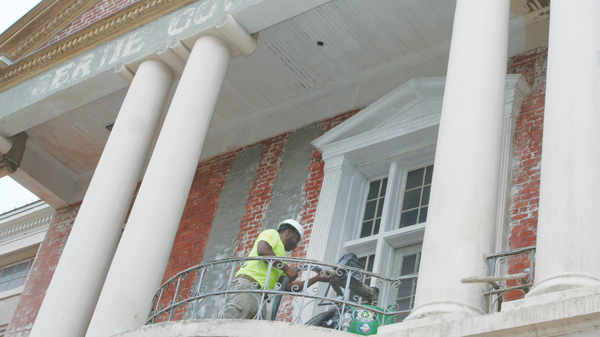 Sherwin Warren of SLW Consulting, supervising contractor for the Bertie County Courthouse renovation project, operates a dustless blaster on the structure’s outer walls. The old courthouse signage, visible from the blasting, is believed to have been painted during the 1920’s. Staff Photo by Gene Motley

WINDSOR – If one has noticed the chain-link fencing surrounding the Bertie County Courthouse, it’s the final phase of renovations to the building at the corner of King and Dundee Streets in Windsor.

If the restoration remains on schedule, completion is expected to take place sometime in December.

A member of the National Register of Historic Places for over 35 years, the courthouse is located in Windsor’s Historic District. It was constructed at its present location in 1889, and is a two-and-a-half story, brick building built in the neoclassical style with a gable roof topped by a polygonal cupola. In 1940’s, the second floor porch and columns were enlarged and two additional wings for judicial personnel on either side of the main courtrooms were added.  A rear addition that houses supplemental county offices was built in 1974. 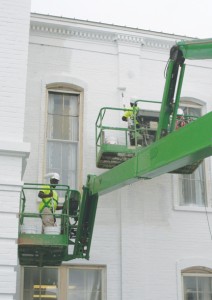 Local painters from Browning & Sons, A-Plus Painting, and Michael Bond Painting are supported by large boom lifts as they apply the new white paint coating to the Bertie County Courthouse. Painting on the building is expected to continue throughout the fall. Staff Photo by Gene Motley

The county opted to make the rehabilitation on the old structure rather than construct a new courthouse.

A new roof was installed in 2012-13 paid for by insurance proceeds due to storm damage years earlier.

The next phase of the project was shoring up the two wings where the walls had been shearing away from the main building.

“I told them that this wing would crumble into the parking lot soon if we didn’t do something about it,” said first-term County Commissioner John Trent, who used his construction expertise to assist County Maintenance Director Anthony Rascoe in spearheading the project.

The reinforcement project was done by RAMJACK of Raleigh, doing the worse sections first and later when the Register of Deeds offices were done, more structural damage was noted which required additional brick work, steel reinforcement, painting and sheet rock repairs.  47 helicon piers, many of which exceeded the projected depth of 25 feet had to be installed to a depth of 69 feet in order to achieve the required measurement of 3,000 pounds per square inch (PSI).

“We did the rest of the building coming all the way around, pumping hydraulic concrete and it raised the floor,” Trent said. We also put in bulletproof glass in the Clerks’ offices for safety and security.”

Once the foundation had been reinforced, a 12-month project completed last winter at a cost of roughly $140,000, then the exterior project was begun.

“In the new phase we’re addressing the windows, the painting, and the gutters,” said County Manager Scott Sauer.

“We are hoping to complete everything by the first of November,” Sauer added.

County officials are proudest that the work is being done by local contractors.

“We’re using glass blasting combined with water,” said Trent. “This way the dust is not sprayed all over the parking lot, onto the street, vehicles, or even onto people.  The concentrated glass blasts onto the surface and falls to the street below where it can be easily washed away.

Keith Lee, son of Perrytown Fire Chief Bud Lee, put up the scaffolding that has encased the building.

Painting has been done by a trio of local painters Warren hired: Alvin Browning of Browning and Sons, A-Plus Painting in Windsor, and Michael Bond Painting.  Four large boom lifts, two 60-foot, one 80-foot, and a large 120-foot, were brought in and have expedited the painting project.  Completion there around the entire courthouse should take place within the next three weeks.

Of the 96-to-100 steel-encasement courthouse windows, they will all be replaced.  Fabrication for the new windows is being done next door to Bertie in Martin County at Williamston Glass.

Shutters will also be done by a local woodcrafter, Danny Jernigan of Askewville, and nearly one-third have been completed, with painting of the shutters to follow.

The double entrance metal doors will be changed out to commercial grade glass doors, frames and doors; both in the front on King Street, the side door on Dundee, and the rear doors where the courthouse joins the office building.

“Financially, we weren’t in a position to take on the debt of a new courthouse,” said Sauer. “And I think we have a beautiful structure that will be a real attraction to the (county seat’s) downtown area.  We’re just trying to do our part to beautify the area.”