It’s too early to predict the actual path and expected strength of Hurricane Joaquin, and even where and when it may make landfall along the east coast.

However, there is one certainty….it’s going to rain; perhaps in buckets, and not just because of Joaquin.

A cold front is coming in from the west and that low pressure system is expected to stall off the North Carolina coast sometimes today (Thursday). Tapping into an abundance of moisture, that weather-maker poses the threat of flooding across the Roanoke-Chowan area, especially with the ground already saturated due to last weekend’s coastal storm and heavy downpours earlier this week, and including drenching downpours on Wednesday afternoon. 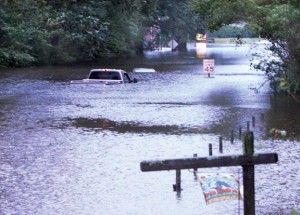 The last major flooding event in the Roanoke-Chowan area came on the heels of Hurricane Irene in August of 2011. One of the hardest hit areas was Windsor, as shown here on US 13 near Edgewood Baptist Church. File Photo

Emergency Management officials locally are urging those living in low-lying areas to take heed now as the rain from the stalled-out front is expected to dump anywhere between 4-to-8 inches across the R-C area.

“We have certain areas of our county, especially around Windsor, that are prone to flooding,” said Bertie Emergency Management Director Mitch Cooper. “If you have lived here long enough, you should know how much rain it typically takes to cause your property to flood. I would advise those living in flood-prone areas to keep their attention on the water levels.”

He added that the situation always worsens downstream on the Cashie River.

Cooper suggested to those living where flooding is typical in a major weather event to secure their property to ensure outdoor items do not float away. If that flooding worsens, he said do not wait to evacuate.

“Have a plan in place to leave quickly if needed; and that plan needs to include taking along extra clothing, medication, etc and don’t forget about getting your pets to higher ground,” he said. “Leave in a safe and timely fashion.”

As far as prepping for Joaquin, Cooper said he will meet with county and town officials today.

“We’re keeping an eye on the hurricane; right now there’s too much uncertainty over its true path because of other weather systems out there that may play a role, to include this stalled-out front,” he noted.

“The counties to our west, to include Halifax, were put under a flash flood watch on Wednesday afternoon; I wouldn’t be surprised to see us put under the same type of advisory,” Smith said.

“It just all depends on where you live; the areas that typically flood here in Hertford County are going to flood from this particular storm,” Smith added. “I would advise those living in those low-lying areas to be prepared to move out quickly.”

And Smith also had words of warning for those driving on flooded roads.

“If you can’t see the center line, don’t drive through it,” he said. “Even if you feel you can make it across a flooded road because of the size of your vehicle, take it slow and easy; and never try to drive, or attempt to walk for that matter, across a road where the water is moving at a rapid pace. Moving water is a powerful force. It can sweep you off the road very quickly.”

Northampton County Emergency Management Director Ronnie Storey echoed the call for awareness by those who live where flooding issues have been noted in the past.

“We have pockets of low-lying areas here in the county; most notably in the Rich Square and Severn areas,” Storey said. “Our saving grace here is we do not typically see a lot of water standing around for a long period of time after a big rainstorm. We have a pretty decent drainage system.”

Like everyone else, Storey knows what’s coming for the next 24-to-48 hours.

“This cold front that’s coming through is pulling a lot of moisture with it; they’re calling for periods of moderate to heavy rain for us through Saturday,” he stressed. “We’ll see some areas on our roads where one of those downpours will result in brief flooding. Please use caution while driving through one of those areas.”

As for Joaquin, Storey hopes it steers to the east and remains far enough offshore as to not feel the effects of its wind.

“There’s no confidence in any of the forecast models right now; no one can pinpoint an accurate track,” he stated. “All we can do right now is plan for the worse and hope for the best.”

As of 5 p.m. on Wednesday, the National Hurricane Center in Miami, Florida said there was little change in Joaquin since it gained hurricane strength on Tuesday. A southwestward motion is expected for the next 36 hours or so, followed by a turn toward the north.

The forecast models are disagreeing on the path; some take it out to sea, west of Bermuda, while others have shifted it closer to the mid-Atlantic states.

It has the potential to strengthen over the next 48 hours, perhaps with winds as high as 115 mph. However, the system is expected to weaken somewhat after that point as it encounters increasing wind shear and cold air intrusion.