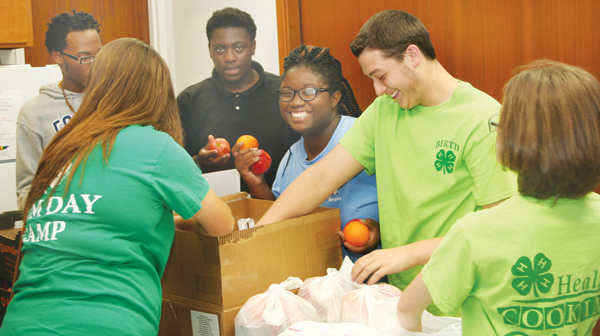 Bertie County 4-H Club members (from left) Tony Young, Abigail Castelloe (back to camera), Rakwon Watson, Sandrika Freeman, Aaron Belch, and Laura Belch share a laugh as they unload boxes of donated food for the Bertie Back-Pack Initiative. The food will be distributed to needy children for consumption on weekends. Staff Photo by Gene Motley

WINDSOR – It’s founded on the idea of helping the most needy of school children so they won’t skip the nutrition they receive during the week at school.

Now a volunteer service program will assure they can receive it at home on weekends.

Thanks to the efforts of the Bertie County Extension Service, the county 4-H Club, and volunteers, the county has begun a special service program to assist all children that will provide nutritious meals now seven days a week.

It’s called the “Youth Bertie Backpack Initiative” and has been spearheaded by Bertie County Board of Commissioners chairman Ronald “Ron” Wesson.

Acting as private citizens, Wesson and the others have spent the past six months collecting funds raised in donations by everyone from a few dollars from ordinary folk, church groups, and area businesses. They’ve even received a monetary donation from a group of inmates at the Bertie Correctional facility. 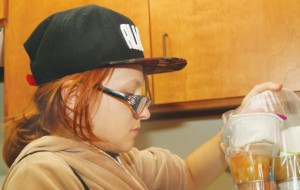 The Backpack program allows some of the county’s most impoverished students to receive a back pack full of community donated food items to take home with them to eat over the weekend. This initiative works in concert with additional breakfast and lunch meals provided at each school during the week to assist even more children in need.

This past Thursday, 4-H Club members from the county’s schools were at the County Administration Building on Dundee Street unpacking boxes of food items and re-packing them into packages, or ‘back-packs’, for distribution.

“It still takes about a couple of hours to sort through everything,” Wesson said, as the youthful crew and a smattering of adults worked with ant-like precision adding items to each child’s bag. “While we stress that the four main food groups are the essentials, these bags also have snack items like pop tarts, pudding, and cereal bars.”

At a Board of Commissioners’ meeting in August, Wesson told of a grant being offered by the U.S. Department of Agriculture and plans for the county to apply for the grant if they can provide additional letters of support.  If successful, the county could receive $100,000 in additional funding for weekend and breakfast programs at area schools.

The idea for such initiatives are not lost on our national legislators as several members of the U.S. House and Senate on Capitol Hill are supporting efforts of organizations such as this and thousands just like it across the country.

Earlier this month, a bi-partisan group of Congressmen introduced the new Hunger-Free Summer for Kids Act, a bill which could help to end summer hunger for millions of children nationwide. The Act gives states more flexibility in how they reach hungry children with the food they need when school is out of session.

Once begun, the legislation could give almost 7 million kids the chance to get the food they need not only during the school year, but also during the summer months.

“What we’ve learned over the years is that school-age children many times go without a nutritious meal when school is not in session,” Wesson said. “While that’s basically during the summer months, it also includes weekends when school is in session.”

“Sadly, for a lot of kids from low income households, the meals they eat at school are the only nutrition they receive, and that only comes when school is in session. Our program fills the gap during weekends.”

Wesson said he was particularly struck by one youngster who lived with their grandparents, and while meals presented a challenge for this child, like many children from low-income families, her grandfather complained that the child ate too much.

“Losing access to school meals for kids puts added strain on already money-strapped households,” he said. “Sometimes families are left making a hard choice, and it becomes a tough trade-off.”

“Just last month, some families were making the choice of food and back-to-school supplies,” Wesson acknowledged.

While the group feels this is a start, they hope to continue to raise donations and continue to reach the needed children.

“We’ve received a lot of positive feedback about the Backpack program,” he said, opening another box of canned goods. “A teacher even said they could tell a difference in the school work and classroom concentration.  Things like that really make you feel good.”