The ChowanUniversity football team rolled to their third win of the season here Saturday with a 49-0 victory over the visiting Saint Augustine’s University Falcons at Garrison Stadium on Hall of Fame Day.

It took a Hall of Fame-worthy performance from the team with their first CIAA win of the season and first shutout of a CIAA opponent, home or away, in school history. The last time Chowan shutout any opponent on the gridiron was a 20-0 win vs. Southern Virginia on Oct. 1, 2005. 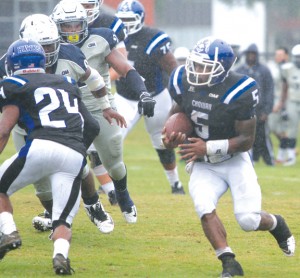 Chowan running back Tyree Lee (#5) set a new school single-game rushing record with 223 yards on the ground against St. Augustine’s as the Hawks mauled the Falcons in the two teams’ CIAA opener, 49-0. Next Level Photos / Charles Revelle

It was also the second victory in as many weeks for the Hawks following their previous win over FCS team, Delaware State; and marked the first victory over Saint Augustine’s in program history.

Tyree Lee led the way for the Hawks, breaking the school’s single-game rushing yards record with a total of 223 on the day.  He had 36 carries in the contest while scoring three touchdowns.

“This (rain) is the kind of game we like, getting real dirty and real nasty,” said a smiling Lee, surrounded at the end of the game by members of his offensive line.  “We couldn’t have done anything without the O-line; and that’s one of my goals: to lead the CIAA in rushing.”

“This is the first game when we didn’t have any turnovers,” said Dixon after the game. “That’s what really made it work out for us. There are still some things we can improve on; we just have to get back in the lab and go to work.”

Turnovers played a big part in the outcome as the Falcons committed seven miscues: Chowan collected five picks and recovered two fumbles. Of the quintet of interceptions the Hawks’ defense forced, Roderick Lyndsey accounted for three of them.

“We knew when they were running (certain plays) it was 85 per cent passing,” said nose tackle Jamal Dixon, who had one tackle and assisted on two more. “We shut down (#24/RB Roderick Davenport II) and put them in position where they had to throw the ball; so that’s basically how we forced turnovers.  We played pretty good, but we can play better.”

Chowan controlled the momentum for the entire contest and grabbed control right from the start with 20 unanswered points in the first quarter.   Lee got the first score, rumbling 43 yards as he shook tackles all the way to the end zone to cap an 80-yard drive.  Nick Hahula’s extra point made it a 7-0 Hawks lead.  Later in the same frame, Dixon found Ellis in the end zone to make it 13-0.  One series later, Ahmond Gomez got a ‘pick-six’ with a 35-yard interception return for a touchdown and it was 20-0 after one quarter of play.

Hahula made good on an 18-yard field goal attempt at the 12:30 mark in the second quarter, propelling the Hawks to a 23-0 lead heading into halftime; also by the mid-point, Lee had gained 150 yards on the ground.

After halftime, the Hawks quickly put the game out of reach thanks to a couple of third quarter scoring tosses from Dixon: one to Baker from 40 yards out and another to Lee with a 14-yard strike.  Lee added his third score on the blustery afternoon with a two-yard plunge following St. Aug’s sixth turnover for 19 points scored in the third quarter.

Chowan’s final score came as Lee’s fourth touchdown of the afternoon, a six yard scramble and a Hahula’s point after to solidify the 49-0 win for Chowan.

The Hawks return to action on Oct. 3 when Chowan travels to meet Winston-Salem State University at Bowman Gray Stadium in the Twin-Cities for the second CIAA crossover contest for both teams.  The Rams escaped an upset at the hands of Elizabeth City State in the Down East Classic at Rocky Mount Saturday, 17-10. Game time this Saturday for Chowan is slated for 1:30 p.m.