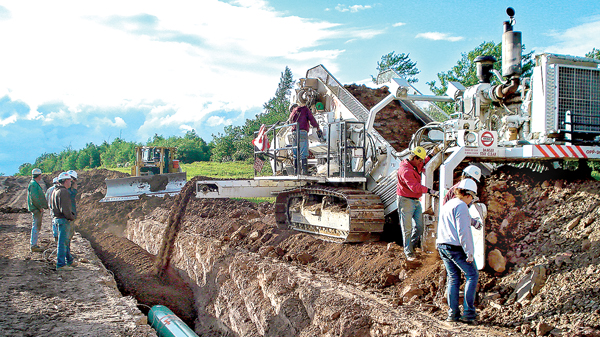 An artist’s rendition is shown of how work will progress on the planned 564-mile interstate natural gas transmission pipeline, part of which will pass through Northampton County where an Operations Center for the pipeline will be constructed.

RICHMOND, VA – The proposed Atlantic Coast Pipeline (ACP) has chosen Northampton County as the site of its Operations Center.

As part of that process, Bruce McKay, senior policy adviser for Dominion, one of the ACP partners, said a decision had been reached to build the pipeline’s Operations Center near Pleasant Hill in Northampton County. The Center will share the same site of the proposed pipeline’s compressor station. The new facility will be approximately 6,600 square feet and will contain offices and conference rooms for nine full-time employees. Together, the office and compressor station will employ about 15-20 full-time employees. 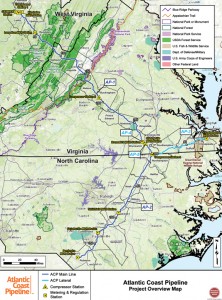 This map shows the proposed route of the pipeline, including a lateral extension that will be built in northern Northampton County as it travels east to Chesapeake, Va.

“Atlantic’s decision to place its operations center in Northampton County is impressive and certainly welcomed,” said Gary Brown, executive director of the Northampton County Economic Development Commission. “The project is critically important in serving the energy needs of residents, business and industry in the state and region, present and future. We appreciate the opportunity to be a part of that, and the trust they have placed in us.”

Fannie Greene, chair of the Northampton County Board of Commissioners, said, “Northampton County is very proud to be chosen by Dominion as the location for the Atlantic Coast Pipeline operations center. We look forward to continuing a strong and beneficial relationship as the project moves forward.”

By 2022, the ACP is projected to bring more than $1.3 million in tax revenue to Northampton County, and about $6 million annually to North Carolina as a whole.

The project now rests in the hands of the FERC, who is being asked to certify the public benefit and necessity of the project. The FERC and a number of participating agencies will examine fully a broad number of issues, including public safety, air quality, water resources, geology, soils, wildlife and vegetation, threatened and endangered species, land and visual resources, cultural and historic resources, noise, cumulative impacts and reasonable alternatives.

Four major U.S. energy companies – Dominion, Duke Energy, Piedmont Natural Gas, and AGL Resources – have proposed to build and own the proposed ACP, valued at $5 billion. The pipeline would transport abundant natural gas supplies from Harrison County, W.Va., southeast through Virginia with an extension to Chesapeake, Va., and south through central North Carolina to Robeson County. Pending regulatory approval, construction is expected to begin in the second half of 2016 and the pipeline is expected to be in service in the fourth quarter of 2018.

The 30,000-page application, environmental resource reports and exhibits represent an extensive study by Dominion and outside experts as well as public input to find the best route to bring the much-needed energy to Virginia and North Carolina. More than 3,000 miles of potential routes were considered and hundreds of route adjustments based on discussions with landowners, public officials and others were made. ACP officials have participated in more than 60 public meetings involving thousands of interested individuals, agencies and organizations.

“The ACP will enhance overall energy reliability in the region, bringing natural gas that will heat homes and power businesses, support thousands of jobs, and promote lower energy prices and economic development. It will be used to fuel a new generation of efficient power stations being built to achieve future federal and state environmental regulations,” said Diane Leopold, president of Dominion Energy, the Dominion business unit responsible for building and operating the project. “We will continue to work with landowners, government and community leaders, regulators and others to address concerns and refine the project.”

The ACP has strong support from the governors of all three states, as well as other federal, state and local officials. A three-state coalition of more than 150 business and labor organizations, EnergySure (www.energysure.com), recently announced its support for the project and the projections of economic development.

Consumers and businesses in Virginia and North Carolina could save an estimated $377 million annually in lower energy costs thanks to the ACP, according to a study by ICF International (www.dom.com/acp-icf). That study also found that more than 2,200 full-time, permanent jobs could be created in the two states because of the lower energy prices. The new jobs would come from businesses being able to reinvest their energy savings in growth and from energy-intensive manufacturing industries once an abundant supply of affordable natural gas is assured.

One-time construction activity of the ACP could inject an annual average of $456.3 million into the economies of the ACP’s three states, supporting 2,873 annual jobs in the region from 2014 to 2019, according to Chmura Economics & Analytics (www.dom.com/acp-chmura).

Local governments along the route also are expected to receive a total of about $25 million a year in new tax revenues when the full value of the project is ultimately reflected in tax payments.

Utility subsidiaries and affiliates of all four companies plus PSNC Energy have signed on as customers of the pipeline. Ninety-six percent of the pipeline’s capacity is subscribed by these companies. For example, Dominion and Duke Energy are building multiple natural gas-fired power stations and closing coal-fired ones to meet growing demand for electricity with less impact to the environment. Natural gas has less than half the output of carbon when compared with coal.

For Piedmont Natural Gas, the ACP will provide access to abundant, low-cost natural gas supplies from a geographically diverse production region and will help the company meet growing demand for natural gas in its Carolina markets.

Dominion has completed surveying about 85 percent of a proposed route that meets the operational and reliability needs while minimizing the impact on the environment as well as historical and cultural resources. The project will file supplemental information with the FERC when surveying is completed and propose a final route.

Dominion Transmission Inc. applied simultaneously to the FERC for permission to build its Supply Header Project, a $500 million project of approximately 38 miles of natural gas pipeline and modified existing compression facilities in West Virginia and Pennsylvania.

The application and resource reports are available on the ACP website, www.dom.com/acpipeline, and the FERC website. Digital copies will be placed in public libraries along the route.