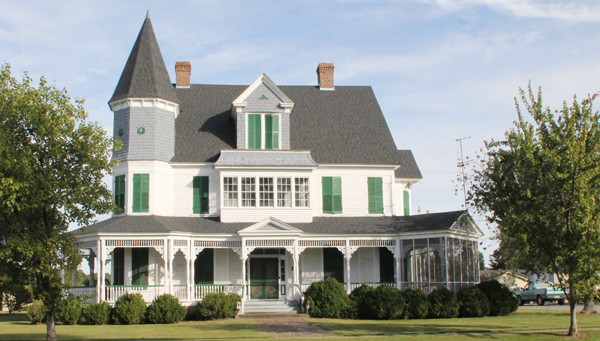 The Gray Gables House, built in 1899, is one of two properties in Winton listed on the National Register of Historic Places. The town’s Historical Association has launched an effort to create a Historic District. Staff Photo by Cal Bryant

WINTON – The reasoning behind an effort to establish a historic district here in Hertford County’s oldest municipality is twofold: to preserve the proud past of the town and hopefully serve as an economic springboard.

On Wednesday, town citizens and other interested individuals participated in a pair meetings designed to share information on a plan devised by the Winton Historical Association (WHA) to create a historical district containing nearly 100 properties.

WHA member Libby Jones, who lives in one of the town’s numerous historic homes, said the creation of a district would be a “win-win” for all involved, including potential visitors to Winton that typically tour historic towns.

The two meetings were held in the late afternoon and early evening, using the Winton Town Hall and the old cafeteria at C.S. Brown School as the gathering points. Both featured Scott Power, employed in the Greenville office of the North Carolina Department of Cultural Resources. Among other duties, his department administers the National Register of Historic Places, which is a federal program under the National Park Service (NPS).

“They (NPS) have the ultimate authority for listing historic properties and historic districts,” he stated.

Power also briefly explained the state and federal tax credits that owners of historic properties can take advantage of should they opt to follow certain guidelines during the renovation/restoration process.

“However, if you choose not to accept the tax credits, you can basically do whatever you want to your property, even if it’s been declared as historic or part of a historic district,” Power noted. “But the tax credits are there if you want to apply. The credits can save you as much as 30 percent against the money you spend for renovation purposes, even if you operate a historic property as a commercial business, such as a bed and breakfast.” 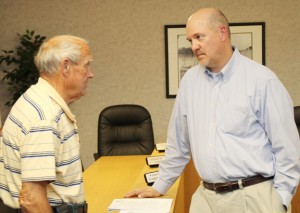 One key element of having a designated historic district is the fact that it protects those properties from negative impacts caused by governmental action (i.e., road widening; erection of cell phone towers, etc.).

Power also explained the criteria for having property listed on the National Register. The starting point, he said, was the place must have physical integrity from the period in which they were important and must be significant for something.

“We have found instances where properties cannot be listed in the National Register because they have been altered in some way over the years or because they’re simply not significant,” he said.

To have a property listed on the National Register, they must meet one of four items of criteria: associated with events that have made significant contributions to the broad pattern of history; associated with the lives of significant persons of the past; embody the distinctive characteristics of a type, period of method of construction, or represent the work of a master, or represent a significant and distinguishable entity whose components may lack individual distinction; and have yielded, or may be likely to yield, information important in prehistory or history.

Power said the WHA’s plans to hopefully establish a historic district would fall under criteria #3. In Winton’s case, that district already has the presence of two properties listed on the National Register – the Gray Gables house and the auditorium at the old C.S. Brown High School.

“What you have here is a collection of buildings that represent a particular era as well as many different styles of architecture that come together as a collection unit,” Power remarked.

In order to get a district listed, Power said a concentration of historic resources is needed.

“They have to maintain enough integrity that as a collection of buildings you can look at them and tell that you’re riding through an area with a lot of history and architecture,” he stated.

A historic boundary has already been established as the WHA moves forward in establishing a district, centering along Main Street (stretching from East Weaver Street to just beyond East and West Cross Street) and includes areas along King Street, West Mulberry Street, one block of East Dickerson Street, and East and West Richard Street. The properties there can either be “contributing” or “non-contributing.”

Power explained the difference, calling contributing properties as those at least 50 years of age and have maintained their physical integrity from whatever period of importance; and non-contributing as properties that are 50-plus years-old but have been altered in some way over the years and no longer represent their period of time.

“We like to see a much higher percentage of contributing properties, as much as 80-to-85 percent, when performing an evaluation to see if an area is qualified for historic designation,” Power stressed. “That will include your commercial properties, churches and schools.”

The Winton Historical Association will hire a consultant to perform the ground work necessary to move forward to the next step – making an application for historic district designation. Power said his office will work closely with that consultant as the process moves along.

“The boundary now established may have to be tweaked a bit once the consultant you hire gets here and begins their research,” Power said.

The application for nomination as a historic district must also include a history of the town; an inventory and photographs of the historic properties (to include a written historic narrative of each); and a context statement – which is a comparison of Winton to other similar communities in the local area and the region. The consultant will perform all of the aforementioned work.

“All of that becomes your argument for national registration,” Power said. “All of those documents first come to our office for review and we may send some comments back to your consultant in order to gain additional information. Once we finalize things on our end, your nomination is forwarded to Raleigh and from there to the National Park Service who makes the final determination.”

Power said the initial step to gain designation in Winton has already been taken as the determination has been made that the town does possess a potential historic district.

The next step is for the WHA to hire a consultant. That will cost as much as $15,000. The Association has launched an effort to raise those funds, and donations are tax deductable.