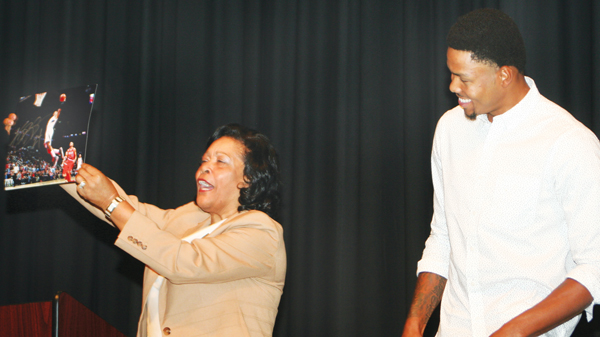 Bertie Schools Superintendent Elaine White displays an autographed photo of Kent Bazemore (in person at right) to be awarded to six random students who want to enroll in the cadet program. Staff Photo by Gene Motley

WINDSOR – When the Bertie County Schools formally announced its Public Safety Cadet Program – which will begin for high school students in January – who better to be the guest speaker than a Bertie native who spent much of this past spring trying to “lock-up” LeBron James on the basketball court.

Kent Bazemore, the Kelford native and current member of the pro basketball NBA Atlanta Hawks, made a return to his home area Friday as part of the Bertie County Community Engagement and Public Safety Cadet Program kick-off.  Bazemore was the keynote speaker at Bertie High School Auditorium, filled to capacity with 11th and 12th grade students from Bertie Early College as well as Bertie STEM and Bertie High Schools. 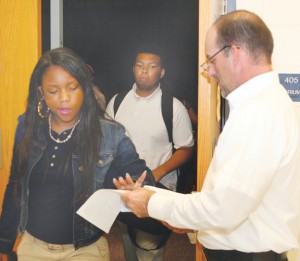 DPS Correctional Career Readiness Coach Daryl Williams (right) distributes flyers to Bertie students, 20 of whom will be selected to participate in the high school Public Safety Cadet program when it begins in January. Staff Photo by Gene Motley

Bazemore’s selection was not merely based on his local or sports celebrity status; he holds a degree in Criminal Justice from his other alma mater, Old Dominion University in Norfolk.

In addition to the education administrators, students, and faculty, the presentation was attended by school board and County Commission members.

“Pay close attention,” said Assistant Superintendent Sandra Hardy. “What you are about to see and hear will pay you well beyond (high school).”

Ann Harvey, Regional Director of the NC Department of Public Safety, who is responsible for the 12 prisons located in the east, said the cadet program is part of the department’s re-branding of its image.

“We know that prisons will always exist, but our goal is that only those who need to be there will be there,” Harvey stated. “But to do that, we need assistance from you, the young people in the community, to change how we exist.  We must have leaders from Bertie County to create a new future as it relates to public safety.”

The Department of Public Safety (DPS) cadet program was developed jointly by the Bertie County School (BCS) system, community and government leaders, the Governor’s Office and DPS. It’s aimed at keeping more young residents of Bertie County employed and near home and developing a well-trained and eligible workforce for one of the county’s largest employers, Bertie Correctional Institute.

Students enrolled in the program will study a criminal justice curriculum jointly designed by BCS and DPS and is focused on developing integrity, leadership and support for the community. Successful completion of the high school course work in the cadet program will provide credits toward an associate’s degree in criminal justice at Roanoke-Chowan Community College or Martin Community College.

After completing the cadet program and earning an Associate’s degree in criminal justice, students will be prepared to begin working as a correctional employee in the NCDPS system.

“You’ll be able to get a jump-start, just like ROTC,” said Harvey. “You’ll already have a leg up on a criminal justice career, and if you decide to pursue another field you’ll already know what it takes to be successful in taking college classes.”

That was echoed in a video message to the assembly by Gov. Pat McCrory.

“This is something where we need highly-talented people right now,” the Governor said in thanking the program’s founders. “Teaching our young people about integrity, leadership, and supporting their community is the goals of this program … (this) will brighten Bertie County’s future and strengthen public safety in the great state of North Carolina.” 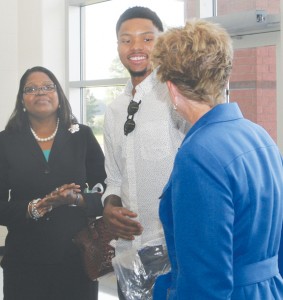 Harvey said they hope to take the program statewide, but for now, this is its beginning.

“The pilot program starts here, and we need you to know we’re serious about this and that we need you,” Harvey implored.

Bazemore, in his brief remarks, related his own Bertie experiences to the very students who hung onto his every word as if he were flying in for a rim-rattling slam dunk.

“I had people who implemented programs that gave me a chance, pioneers to the cause,” Bazemore stated. “Now it’s about you guys, and about taking advantage of the things that come your way.”

Bazemore said his remarks were about grabbing the advantage “when opportunity knocks”.

“You want to have more than one route,” he said, “in case things get a little backed up, you’ve got a detour.  Being part of this program will give you the tools and the mind to do something like that.

“I grew up in situations much like you guys,” he acknowledged to the crowd. “But you have to get up every day and know that the next day will be better.  And during that time you grind to make that happen.”

In comparing the success of the schools’ Emergency Medical Services program, Bazemore challenged the students to focus that energy into this new order of business.

“You’re headed in the right direction,” he said. “You guys here are doing something positive.  This is a new opportunity and it’s good to be the first … take a leap of faith; I never thought I’d be playing against LeBron, but I believed, I had faith, and I had opportunity.”

Bazemore said a harsh reality is that if opportunity is wasted, it may not come again.

“We need 20 kids to take over this program, to be a guide for the rest of your life,” he reiterated. “Stay focused, and think about making a difference.  We’re brilliant, we’re strong, and it’s up to us to show them we can make a difference.”

Superintendent Elaine White asserted that dedication could make the DPS program as successful as its predecessors Army Jr. ROTC and EMS.

“Our job as a community is to bring the best there is, so you can be competitive wherever you go,” she stated. “We need 20 strong, focused, serious, honest, committed, and hard working; to produce greatness … we’re going to make this happen.”

As the students were dismissed, they received informational flyers to take home to review with their parents and then return with them to learn more from school counselors.  From the returned flyers, six students, names drawn at random, will receive an autographed action photo of Kent Bazemore.

The line on Lyons