The line on Lyons

WINDSOR – Though she maintained a quiet demeanor throughout the remarks, one could tell she was as touched with humility by the devotion as well as the criticism.

One by one, parents, former players, ex-co-workers, assistant coaches, and even a pair of former school board members, took turns commenting on former Bertie High girls basketball coach Alice Lyons.  The speakers appeared before the Bertie County Board of Education here Tuesday evening during the public comment section prior to the Board’s regularly scheduled order of business. 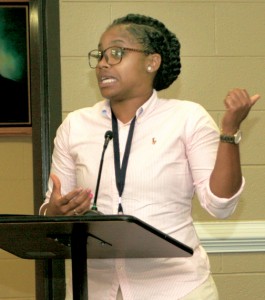 Tonya Bazemore was among those who made remarks regarding former Bertie High girls basketball coach Alice Lyons at Tuesday’s meeting of the Bertie County Board of Education. Staff Photo by Gene Motley

Lyons had coached the Lady Falcons for 30 years and picked up her 700th career coaching victory just this past season.  A Bertie native, she came to the school in 1984 after coaching and teaching stops at Hertford County High School and her alma mater, North Carolina A&T State University in Greensboro.   She retired from coaching and teaching Physical Education at the school in 2011 after 27 years, but was brought out of retirement following one year’s hiatus.

In May of this year, Lyons – as did all BHS coaches –received a letter detailing at the end of the 2014-15 school year they might not be retained at their coaching positions, as their employment is seasonal and that there has been a school policy that makes every effort to hire certified teachers as coaches.

In August, Lyons and boys basketball coach Kelvin Hayes were informed they would not be coaching their respective sports for this school year, replaced by staff personnel.  Word of this action created a firestorm on social media and Lyons had said at the time she wanted to appear and speak at the regularly scheduled school board meeting.

Before Lyons spoke on Tuesday several others came before the board.

Katenia Jackson, a parent of a former player, admitted to having issues with Lyons, seemingly over her daughter’s playing time.

“We had five seniors last year, only one of them could hit the floor,” Jackson stated. “They, along with my daughter played AAU ball, some of the best in the state, but they weren’t good enough to play for Bertie High School.  Something’s wrong there; our children need to be fairly judged…I’m not here to downplay her accomplishments, but our issues need to be addressed. It’s about our children, and if we’re not going to give them the same respect that working hard and doing their best is going to reward them, then we’re not teaching them the values I thought Bertie County was based on.”

Lester Lyons, who previously coached the boys and later assisted with the girl’s basketball program, mentioned other coaches who had passed coaching milestones and wondered why his mother had not been so honored.

“She’s a pillar in the community,” Lester Lyons said. “The kids in the program understand the work and what it takes to win. They have been successful for years and this is something we as a county should be proud of.  I said that to give this some perspective, instead we have this issue here.”

“She’s dedicated many years of tireless effort to our community, to our schools, our children,” said former school board member Pam Chamblee. “Coaching entails more than dressing up and standing on the sidelines; you have to bond with those individuals, understand them, and go into their communities. When you have someone who goes that extra mile they do what must be done.”

Chamblee was the first of many speakers to broach the name for former Bertie player Jessica Breland; the Kelford native who went on the play at UNC-Chapel Hill and later as a professional both overseas and in the WNBA.

“This is an example of what BertieCounty schools can do in molding and shaping young people, and I attribute that to the effort of Miss Alice Lyons,” Chamblee remarked. “Children just want to play ball; but we need to know that when the clock stops our children are going to be taken care of … I hope you will do what is right by the children.”

Current player Zariah Harris, a captain on last year’s team, called Lyons the best coach she ever had; while Jeffrey Felton said he hoped the outcry in the community might cause the board to re-consider its coaching policy.

“In her 34 years she has won numerous championships, and she has been a guiding force in several young ladies’ lives,” Felton said. “She’s prepared them for college and for life itself.”

Courtney Winborne, a former player, praised what she called Lyons’ “extra guidance”.  She was followed by her mother, Joy Jones Lee, and both talked about Bertie tradition and Falcon pride.

“The only thing Coach Lyons hadn’t done is she never won a state championship; and she didn’t do that, we didn’t do that,” Winborne said. “We had the talent, we had the skills, but she couldn’t play for us … we’re about teamwork, love, pride, and tradition.”

“I graduated in 1987,” said Lee, “and Coach Lyons raised me as much as my grandmother … you don’t just take somebody and move them out of the way.  You don’t know what you’re getting, but we know what we have and we have the best of the best.”

Two more former players, Tonya Bazemore and Jariyah Askew spoke up on Lyons’ behalf, echoing the others in their praise and admiration.

The final speaker was Alton Parker, former school board member.  While Parker praised Lyons, though questioning her coaching totals, he said the school needed to make a transition.

“I was on the board when we considered this policy in 2012 and said we thought it would be a good idea if the coaches came from within the classroom because they would spend more time with the players throughout the year, they would have better rapport, and know their academics … why do you think that position is yours when you know at the end of the year there could be changes? … I think a change is appropriate, and I think now is the time to make the change and I applaud your feelings on it.”

“I’m sure there are plenty of colleges that would love to have her,” he noted.

Lyons herself only made brief remarks, thanking those who came out to support her bid for re-instatement, and implying she may be seeking litigation.

“At this time on the advice of my counsel I cannot speak; but I want to thank everyone who came out, whether you’re for me or against me, thank you,” she said.

The school board took no action following the public comments and moved directly into its regularly scheduled agenda. The names of the new coaches who would be replacing Lyons and Hayes were not revealed at the meeting.