RALEIGH – The North Carolina Department of Public Safety is seeking help in locating 12 long-term escapees from the North Carolina prison system, including one convicted of murder in Hertford County in 1963.

Melvin Jones of Murfreesboro was serving out his life sentence for the fatal beating of local businessman W.E. Worrell on June 6, 1963. He was initially incarcerated at Central Prison in Raleigh before being moved to the Halifax Correctional Center, which is now closed. On Oct. 2, 1976, Jones was carrying out an outside work assignment at Caledonia Farm in Halifax County when he escaped. He has been on the run since that time, and state officials are unaware if he has since died.

According to research of old files of the “Hertford County Herald” – Jones and Al Deloatch, both 19 at the time, went to Worrell’s grist mill in Murfreesboro on June 6, 1963 with plans to commit robbery. 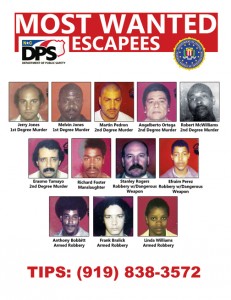 Inside the mill house office on that day were 91-year-old W.E. Worrell and one of his employees, 65-year-old Ralph Davis. They were in the process of tabulating the sales from the previous day’s work when confronted by Jones and Deloatch.

During the robbery, Worrell was thrown to the cement floor of the office with such force that he suffered internal injuries. Worrell died the next day at Raiford Memorial Hospital in Franklin, VA. Davis survived the brutal attack, suffering head and facial injuries.

At the time of his death, Worrell was the oldest member of Murfreesboro Methodist Church.

Jones and Deloatch fled the crime scene, but were spotted later by off-duty Highway Patrol Trooper Jack Stewart as they entered a wooded area near Sandy Hollow Stables, located approximately one mile from Worrell’s Mill.

Following their capture, the two men confessed to Hertford County Sheriff R.V. Parker that they had planned the robbery while in jail on the charge of breaking and entering G.V. Wise’s store in Murfreesboro where they stole several hundred dollars worth of merchandise.

Both men were convicted of first degree murder on July 24, 1963 in Hertford County Superior Court.

A check of the NC Department of Public Safety’s website confirmed that Deloatch served out his sentence. It is not known if he is still alive.

A year-long joint investigative effort by the Department of Public Safety and the Federal Bureau of Investigation has resulted in the arrest, location or death confirmation of 43 long-term escapees from the North Carolina prison system.   This number represents a reduction of about 30 percent of the department’s outstanding escape cases, many dating back to the 1960s or earlier.

During the initiative, 10 wanted fugitives were found at-large, arrested and returned to the state prison system to complete their sentences. Fifteen escapees were found incarcerated in other states or in the federal prison system, many under aliases. Eighteen escapees were confirmed to be deceased or are believed to be dead and work is in progress to obtain death certificates.

A list of 12 “Most Wanted” escapees was developed from those cases remaining at large and investigators are seeking the public’s help with any information on the whereabouts of these escapees. All of the most wanted escapees have been at large for many years and are likely living under different identities. Anyone with information regarding these escapees is asked to contact the Department of Public Safety at (919) 838-3572.

“Partnerships like ours with the FBI help build safer North Carolina communities every day,” said Public Safety Secretary Frank Perry. “We appreciate the Bureau’s continuing support on this initiative to ensure that justice is served in these old fugitive cases.”

The other 11 long-term escapees are:

Jerry Jones – 1st degree murder; escaped 10/6/1987 while assigned to the Robeson Correctional Center in Lumberton. He is now age 65.

Efraim Perez – Robbery with dangerous weapon; escaped 6/20/1995 while assigned to Sanford Correctional Center in Sanford. He is now 44 years-old.

Stanley Rogers – Robbery with dangerous weapon; escaped 10/25/1996 while assigned to Wilkes Correctional Center in North Wilkesboro. His current age is 59.

Linda Williams – Armed robbery; escaped: 6/17/1979 while assigned to the NC Correctional Institution for Women in Raleigh. Her age today is 63.

‘Light up the night’