WINTON/JACKSON – Cooperation between neighboring law enforcement agencies has netted the arrest of a local man allegedly involved in a break-in and larceny of items from a Murfreesboro business.

Michael Lee Stuhr Jr., 19, of Garris Street in Lasker, stands accused of seven felonies – three counts of breaking and entering, and two counts each of larceny and possession of stolen goods/property – after he allegedly forced his way into several buildings at Murfreesboro Farms and stole various items. 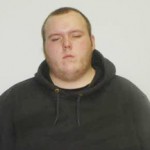 Stuhr was also charged with four counts of injury to real property, and one count of first degree trespass, all misdemeanors, which resulted in a total bond of $100,000 upon his arrest last Friday.

He made his initial appearance in Hertford County District Court on Sept. 1.

In Northampton County, Sheriff Jack Smith said Stuhr has been charged with one misdemeanor count of possession of stolen property in connection with the Murfreesboro crime.

The case against Stuhr was initiated on Aug. 28 after Northampton County Deputy Jaquan Britt received information that Stuhr was possibly involved in the break-in at Murfreesboro Farms earlier that same morning.

“Deputy Britt contacted Lt. Jessie Fennell of my office that a crime had possibly been committed at Murfreesboro Farms,” said Hertford County Sheriff Juan Vaughan. “The tip received by Deputy Britt that Mr. Stuhr was involved in that crime later proved to be correct as photos taken by Deputy Britt of items found inside Mr. Stuhr’s van, parked at his residence, were positively identified by the owner of Murfreesboro Farms as some of the items missing from his business.”

When Fennell and Britt met at the crime scene at around 6:30 a.m. on Friday, the two discovered tire tracks in a grassy area near a fence at the property. They also found a hole cut into the fence.

Upon the arrival of the business owner, the two officers accompanied him inside the fence and went to a farm shop on the property. There they saw that the front door had been pried open.

“The owner noted that several extension cords were missing as well as two welding leads that were cut off a MIG welder,” Vaughan said. “They also took note of an unsuccessful attempt to cut the wires off another welder located inside that building.”

Vaughan added that a game camera mounted on a wall inside that building held clues to the suspect.

“The digital pictures from that camera were downloaded and printed off at the office of the business; they showed a large frame white male, wearing a mask and a light colored hooded jacket, at different locations inside that building,” Vaughan said. “When the Northampton Sheriff’s Office executed a search warrant at Mr. Stuhr’s residence over in Lasker, items identified as stolen from Murfreesboro Farms were found there, as well as a mask and hooded jacket that fit the description of what the subject was wearing, as noted in the photos from the game camera.”

The suspect also forced his way into two other buildings on the Murfreesboro Farms property. Wall-mounted outdoor lights and a braided welding lead were discovered missing from one of those buildings.

“I would like to thank (Northampton) Sheriff Jack Smith and Deputy Jaquan Britt for the outstanding cooperation they provided my officer in this case,” noted Sheriff Vaughan. “We may be separated by a county line, but we all work together in the best interest to protect and serve the citizens of our respective counties. Teamwork is essential in fighting crime and that effort was what led to the arrest in this case.”