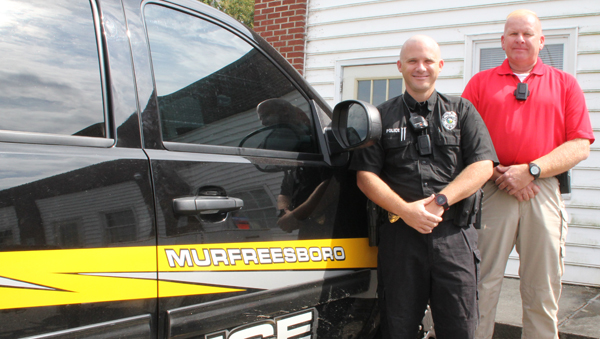 Sgt. David Griffith (left) and Lt. Joe Burgess are two of the eight Murfreesboro Police officers to add body cameras (shown on their upper chest) as part of the equipment they use on a daily basis. Staff Photo by Cal Bryant

MURFREESBORO – As cries of police brutality are now more commonplace, it appears that America has reached an intersection where technology and human behavior meet.

For members of the Murfreesboro Police Department, they welcome the new technology, which is now being highly favored by law enforcement agencies across the nation in the wake of the August 2014 shooting of Michael Brown in Ferguson, Missouri.

Murfreesboro Police Chief Darrell Rowe said the effort to equip his officers with body cameras was directly linked to incidents across the nation where lawmen used deadly force while carrying out their duties. In a few cases, none locally, the use of that type of force has been ruled unjustified, resulting in the arrest of law enforcement officers. 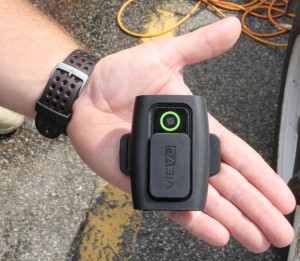 The new cameras are so small and lightweight that they can fit in the palm of your hand. Staff Photo by Cal Bryant

“We see the use of body cameras as a way not only to protect our citizens, but our officers as well,” Rowe stated.

The MPD Chief added that the use of body cameras by law enforcement officers remains as emerging technology.

“A lot of departments are trying to figure out the best way to implement and use body cameras,” he said. “It’s unfortunate that we have to have this type of equipment, but I have no problem with us using them because my officers are trained to do what they’re supposed to be doing in carrying out the letter of the law.”

MPD was the first department in the local area to install and use in-car cameras and are now blazing the same trail in the use of body cameras.

MPD Sgt. David Griffith headed up the research to find the right type of camera to best serve the department.

“Sgt. Griffith is tech savvy so I turned to him to research what was out there on the market,” Rowe said. “I looked into the legality and internal policies regarding the use of this type of equipment. Once I found a policy that puts us in good legal standing for using these cameras, we proceeded in securing these devices for our department.”

Rowe noted that body cameras carry a hefty price tag, so research into what was best for the Murfreesboro Police was critical.

“Once you buy them and they turn out to be not the right one for you, then small departments such as ours just can’t turn around and buy another model,” Rowe said.

Griffith’s research found that the Vie Vu cameras would best suit the needs of the MPD. They came at a cost of $900 per camera.

“We were sent a Vie Vu camera to test; we let various officers wear it and record from it to see if it was right for our needs,” Rowe stated.

While Rowe said that $900 may sound steep for one body camera, that price is worth it as compared to the in-car cameras (dash cams; priced at $6,200 each).

“The dash cams give us excellent usage on traffic stops, but once an officer leaves the view of the lens there is no visual image of what is taking place,” Rowe stressed. “When the body camera is activated it is recording video and audio when an officer is interacting with the public while answering a call.”

Thanks to the generosity of Murfreesboro businessman Ray Felton, the town was able to purchase the majority of the body cameras needed.

“Ray Felton has long supported our department as well as other causes here in town,” Rowe noted. “He donated enough money to purchase six cameras. We have a total of eight cameras; one was purchased by one of my officers and we had enough money in our (department) budget to purchase another one.”

Rowe said the body cameras are “the cheapest form of insurance the town can buy.”

“As far as the evidence, everything is right there on video,” he remarked.

The use of body cameras by police is gaining favor across the nation. The ACLU (American Civil Liberties Union), which traditionally has opposed the use of surveillance cameras in American life, has stated the police on-body cameras are different because of their potential to serve as a check against the abuse of power by police officers. 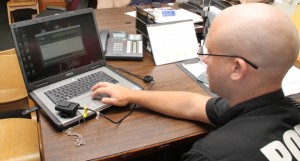 Sgt. David Griffith demonstrates the ease of downloading the body camera files onto a dedicated computer inside the Murfreesboro Police station. Staff Photo by Cal Bryant

“Historically, there was no documentary evidence of most encounters between police officers and the public, and due to the volatile nature of those encounters, this often resulted in radically divergent accounts of incidents. (Body) Cameras have the potential to be a win-win, helping protect the public against police misconduct, and at the same time helping protect police against false accusations of abuse,” the ACLU stated on its website.

“What’s even better is that the video and audio recordings are secure; an officer cannot edit or delete anything,” added Sgt. Griffith. “We download the video files to a secure computer in the office, from where we are able to download the video onto a DVD to use as evidence should the case proceed to court.”

Rowe said his officers fully support the use of body cameras.

“They were the ones that asked if we could afford them; they love having them as another tool in carrying out their sworn duties,” the Chief said.

Rowe noted that in some cases, what is recorded on video, particularly from a dash cam, is only part of the incident at hand.

“Most of that video shows a situation that has already started; what it doesn’t show is what led up to the officers being in a particular situation,” he said. “That’s one of the great things about using a body camera….it’s on from start to finish.”

Griffith said the body cameras used by the MPD officers can record up to 12 hours. The lightweight camera is self-contained, meaning the video is being recorded and stored within the device.

To help further secure the “clip-on” camera to the officer’s uniform, Rowe has devised a lightweight, but durable, chain.

“That way, should the officer become involved in a struggle or a foot chase, the chain prevents us from losing the camera,” Rowe said.

Another plus to having video cameras is the fact that they can play a role in deterring criminal activity.

“I’ve had officers tell me that they’ve been involved in an incident that had the potential to turn volatile, but once the individuals realized they were being videotaped they calmed down,” Rowe noted.

To date, there are pending court cases where video evidence from the MPD body cameras is scheduled to be used.

Rowe said the videos downloaded to the computer are saved and archived.

“This is just the tip of the iceberg when it comes to adding tools we can use to fight crime. I see the day when an officer steps out of his vehicle and what he or she sees is the same thing we see back here at the office, all in real time,” Rowe concluded.

That’s a long way from the days of three-channel police radios, a nightstick, a pistol, and a flashlight.