Hunter remains true to his roots

GREENVILLE – Although he now hangs his political hat in the North Carolina General Assembly, Howard Hunter III has not forgotten his roots as a public official. 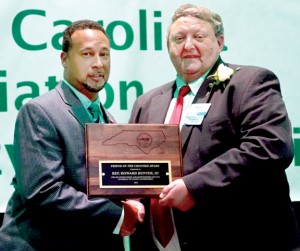 Hunter was honored for continuing to represent the interests of counties as a legislator. He is the primary sponsor of a bill that would accomplish an NCACC legislative priority to end a school board’s ability to sue a board of county commissioners over education funding.

“Rep. Hunter works with legislators in both parties to try to find solutions that help all the citizens of the state, and not special interests or smaller groups,” said NCACC President Ronnie Beale of Macon County. “He has done a tremendous job of making and building relationships in both chambers, and this will make him an even more effective advocate for county issues.”

“It means a lot,” said Hunter on being honored by the NCACC. “To no longer be a county commissioner and to know you have helped all 100 counties, and now that I’ve moved on I feel I’m still able to help counties as well as cities.

“I co-sponsored House Bill 518, which gives counties the vote on a quarter-cent sales tax by either resolution or referendum,” Hunter added. “This helps all counties and it’s better than the tax re-distribution bill. It’s just another tool that helps counties because what it says is that it gives counties flexibility to use for education or transit. House Bill 846 – which I also helped sponsor – will do the same thing for the cities because it will help replace (the cities’) privilege-tax license that the General Assembly stripped from them two years ago.”

Hunter’s wife, Dr. Wanda Hunter, was with her husband at the awards ceremony.

Hunter served as NCACC President in 2013-14. During his year as president he pushed a mentoring initiative that resulted in the creation of the Advanced Leadership Corps (ALC), which was created in conjunction with the UNC School of Government. The ALC is a program for experienced local elected leaders who are committed to effectively governing and leading at community, regional and state levels.

“I really, really still have a lot of friends in the NCACC; I’ve helped a lot of people and they’ve helped me.  I miss the Association, I love that Association; being president of an organization like that you can’t help but love it,” Hunter noted.

The Friend of the Counties Award was created to encourage non-county persons and organizations to take significant actions that advance the interests of counties and the Association. Any person or organization in North Carolina or the United States who or which is not directly associated with North Carolina county government or the NCACC is eligible to for the award.

“As long as I’m in the legislature I will continue to look out for counties and our cities as well; I’ll never forget where I got my start,” Hunter concluded.