Week number two of the 2015 high school football season will play out on Friday with all six Roanoke-Chowan area teams in action.

Hertford County won their season opener before a large and gracious crowd of fans at Bear Stadium 53-12 over Gates County. 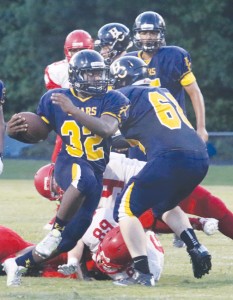 Hertford County is looking for another outstanding performance from running back Kyeem Perry (#32) on Friday when the Bears travel to Wilson to face J.B. Hunt in what will be a big football night with all six area teams in action. Dynamic Photo / William Anthony

“It’s good to get off to a good start,” said Bears coach Terrance Saxby. “It was a good effort and we played well, but we still have things to work on.”

This Friday, Hertford County (1-0) travels to Wilson Hunt (1-0). The Warriors shocked 4A Lumberton in their season opener; scoring 28 unanswered points in a 28-20 win.

“It’s a typical Wilson Hunt team,” said Saxby. “They are big on the offensive and defensive lines.  They’re very athletic, and return a good quarterback (in Jacob Williamson) and running back (in Darius Barnes – 164 yards on 20 carries against Lumberton) from last year.  It will be a good test for us.”

“For us to be successful Friday we have to tackle well defensively,” Saxby concluded. “Offensively we need to make plays and have a good game plan.”

Last Friday night while Gates County was losing to Hertford County Pasquotank was being similarly routed by Camden County, 61-23.

This Friday the two losers from a week ago will be seeking their first victory of the season when the Red Barons (0-1) travel to Elizabeth City to meet the Panthers (0-1).

“HertfordCounty played well,” said Gates coach Matt Biggy.  “We had some guys do some good things; we will just have to get better each week.

Biggy says he’s well aware of the explosiveness of his opponent.

“Pasquotank will throw the ball a lot,” Biggy added. “They have good athletes and also have good size up front.”

Last week senior running back Mark Ricks had 133 yards rushing and a touchdown.  Quarterback K.J. Riddick had 100 yards passing and one touchdown against Hertford County.

“For us to be successful Friday we have to establish our running game and create holes up front for our running backs,” closed Biggy. “We also have to be more consistent in our defensive secondary.”

While the Falcons had their off-week for the first playing date, Northampton was on the field playing their season-opener.  Despite a tight game in which they actually held a lead in at one point, the Jaguars fell to the Yellow Jackets, 41-24.

“We led at halftime,” said Northampton coach George Privott.  “Roanoke Rapids was more physical and had more depth than us as we had a lot of players going both ways.”

This Friday brings another case where one team will get their first victory of the season when Bertie (0-0) plays their season-opener at Roy Bond Jr. Stadium against the Jags (0-1)

“Bertie is fast and they’ve got good size on their offensive and defensive lines,” added Privott. “They have good athletes and we are really looking forward to this game.”

On offense the Falcons will be led by senior Darquail Wilkins at quarterback and junior Corey Cherry at tailback.

“For us to be successful Friday we have to play assignment football on defense,” concluded Privott. “We have to work on conditioning the rest of this week and just be prepared to play.”

Last Friday Lawrence had one of the most unexpected wins in the state when they knocked off Halifax Academy, 18-14, for the Warriors’ first opening win to start a season since 2004.  It was also the first win for new head coach Lee Hoffman. Meanwhile, the defending NCISAA state champion Eagles were losing at home to Arendell Parrott, 56-35 – a team RMA beat last fall for the state championship.

This Friday Rocky Mount (0-1) visits Lawrence (1-0) in the Warriors’ home opener. It will also be LAW’s first game against a 2A opponent under the new independent schools’ playoff format.

“It’s always a challenge when you play the defending state champs,” said LAW coach Lee Hoffman. “They lost a lot but still have a very good team. Offensively, we have to execute better and stay on our blocks. Defensively, we had a great first game but this will be a more balanced offense to defend against.”

Lawrence is led by quarterback Jarrett Harrell, who passed for 95 yards and receiver Tyler Jones who caught one touchdown pass last week against the Vikings and ran for another.

Despite a 44-44 tie with a minute-and-15 seconds left in the game, Northeast Academy fell to Southampton Academy, 50-44, in a heartbreaking home opening loss last Friday in Lasker despite both teams tallying nearly 800 yards of offense.  Matt Little passed for two touchdowns and ran for two more while Cody Wells ran for two more scores. The Eagles’ opponent for this week Arendell Parrott Academy, meanwhile, was avenging their 2014 state championship loss by beating Rocky Mount Academy.

This week Parrott (1-0) returns home to Kinston to host Northeast (0-1) with the Eagles’ hoping to keep the momentum going, but this time with a hoped-for better result.

Ready for some football!