All Bertie High coaches received a letter from Eley this past May stating the school system’s intent to make every effort to only hire coaches for the upcoming school year who are already employed as certified teachers on staff; but that if no teachers were available for a specific sports then non-faculty teachers would be hired. 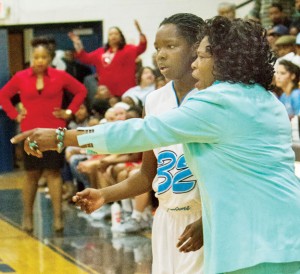 Alice Lyons, shown here with one of her players, has been ousted from her duties as head varsity girl’s basketball coach at Bertie High School. Boy’s coach Kelvin Hayes was also released. File Photo

Eley was unavailable for comment Friday, but Superintendent Elaine White praised Lyons’ coaching and her service as a Bertie educator.

“No one can say that Alice Lyons has not been an excellent coach because she has been,” said White. “But there has been a push now to get all our coaches from within the staff.  We don’t know that we will be able to do that, but we wanted all our coaches to be aware that was what we were trying to do.”

White said all coaches, in any sport, are hired on a one-year basis.

“They’re classified,” she stated. “They’re hired from one year to the next; for a season, because there’s no contract for a coach.  You can’t be fired if you haven’t been hired.

“You can understand why we would want to do that,” White added. “If the coach is on the campus with the students then they are better able to guide their academics.  That is what we are trying to do.”

Meanwhile, Lyons spoke with the News-Herald on Thursday and was evidently disappointed at news of her dismissal.

“I had a girl that just played in the East-West All-Star game (Fayetteville State University-bound De’Najah Porter), a girl who plays in the WNBA (former Bertie and UNC player, Jessica Breland, a Kelford native), I won the conference, I won tournament (games), and I worked with my girls all summer to now get fired,” Lyons said in an interview.

Lyons said her dismissal was not a total surprise, as she had spoken with Eley at the end of last season and later this past summer and at that time she says she was told a coaching change was in the works when she received her letter.

“It’s not personal, (Eley) said,” according to Lyons. “We were told at the end of the season that he was trying to hire someone then from within; but the (junior varsity) coaches are still there.”

Bertie Schools’ Coach/Extra-curricular hiring process, adopted in 2012, does state that as far as the use of non-staff members as coaches that every effort should be made to use school employees to handle coaching responsibilities.

Lyons also said she plans to fight her dismissal and plans to appear before the Bertie County Board of Education when they meet in Windsor on Sept. 8.

Meanwhile, as word of Lyons’ firing became known, social media erupted with a firestorm of responses to the news.  While a majority was favorable and many called for her re-instatement, there were others who spoke up for the school board policy.

Lyons had coached the Lady Falcons for 30 years and picked up her 700th career coaching victory just this past season.  She first came to Bertie in 1984 after stops at Hertford County High School and her alma mater, North Carolina A&T State University in Greensboro.   She retired from coaching and teaching Physical Education at the school in 2011 after 27 years, but was brought out of retirement following one year’s hiatus.

Hayes had a three-year record of 54-21 since he took over the post in 2012.  His best season was his first (‘12-‘13) when his Falcon team compiled a record of 21-4.  Bertie missed claiming the Northeastern Coastal Conference championship to Northeastern High by a single game, only to be knocked out of the post-season by the Eagles in the second round of the playoffs.

“I feel like the decision was wrong and unjustified,” said Hayes. “I felt if it had to be done, it was something that should have been done gradually versus cut and dry; it just didn’t seem fair.”

Hayes says he hopes to continue coaching on some level.

Hayes had a stellar career as a Falcon athlete.  Before graduating in 1986 he was a quarterback of the football team, point guard on the basketball team, and a third baseman on the baseball team.

“I was MVP in all three of those sports,” he said proudly. “I’ll always be Bertie.  My heart is all here because I had more invested than (others); I’m home.”

There is no word from Bertie High as to the new varsity head coaches for the boys and girls basketball teams.